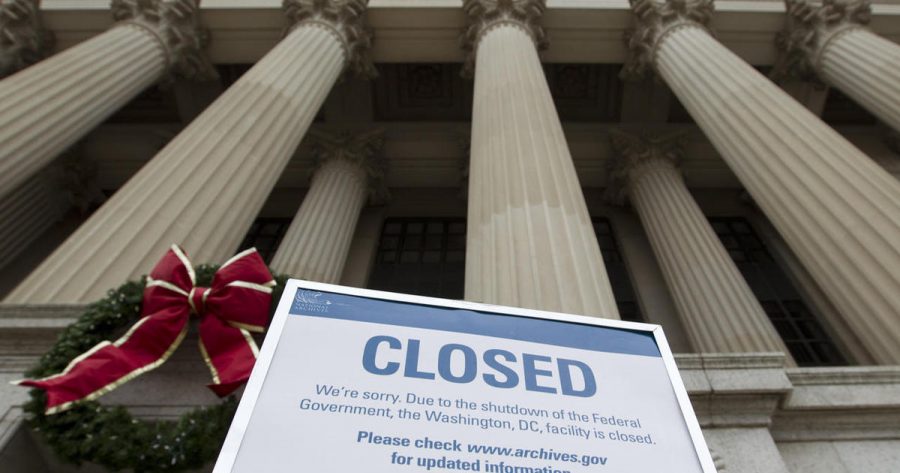 Courtesy of CBS News Multiple government facilities and national parks have been closed due to the government shutdown.

Another year, another government shutdown. If it’s beginning to feel like a common occurrence, it’s because it is. In the past six years, the government has been shutdown three times. And as we near two-year mark of Donald Trump’s presidency, we have already witnessed two government shutdowns, which astonishingly does not seem like a good way to make America great again. This one has stretched on for a record-breaking 24 days. While many issues are at hand as the government tries to make a budget for the upcoming year, the main roadblock towards a deal is border security.

Trump wants $5.7 billion to fund a border wall while Democrats strongly object to the building of the wall, leading to an impasse in which neither side will flinch. Yet as the days pass by and many government agencies remain unfunded, this deadlock is becoming quite lopsided as Trump’s fellow Republicans have not voiced strong support for the wall. In fact, Senator Lindsey Graham called the wall a “metaphor” and said he sees no “pathway forward”. Still, Trump refuses to give up his fight and has insisted that the shutdown will continue unless funding is provided. Democrats stubbornly refuse to budge. Republicans are growing tired, but will not completely disown Trump. Who is to blame for this debacle?

In the end, Trump was the reason this shutdown happened and every day this shutdown drags on more blame is placed on him. Before the shutdown he said, “I’ll be the one to shut it down. I will take the mantle. And I will shut it down for border security.” He took the blame before, and he should take the blame now. He could see from a mile a way that a Democrat-controlled House of Representatives would never pass a budget that included $5.7 billion for a wall.

Of course, Democrats still must work more across the aisle in order to have a fully functioning government, but the wall is a dealbreaker in any scenario and Trump has to realize this. Democrats are not against border security, but they are against a wall that has more negatives than positives, especially one that requires billions of dollars to build. Additionally, Trump claimed that “At the request of Democrats, it will be a steel barrier rather than a concrete wall.” This was a concession Democrats actually never made and Trump will never make any progress unless he can stop making up lies.

Perhaps the most troubling part of the shutdown, however, is the amount of missed opportunities. Both sides are completely focused on border security and the wall, but imagine the impact that $5 billion would have on education or healthcare. The narrow-mindedness and stubbornness of both sides are the leading to so many different aspects being neglected or forgotten about. And this shutdown will continue unless that stubbornness and narrow-mindedness are thrown out the window. Nothing can be done without compromising and now is not the time for parties to decide that working across the aisle is worthless.

President Trump cannot keep playing this childish game, either. He must give up the fight that he will lose, or at least hold off border talks until after the government shutdown ends, which Democrats have repeatedly suggested. All parties must forget about their own agendas because at this time, all Americans are suffering. 800,000 government workers have either been furloughed or have been working without pay. Multiple national parks and monuments have been shut down, damaging the tourism industry. This deadlock must be resolved, not for border security, but for well-being of the American people. Yet, this shutdown will not end unless Trump, Republicans, and Democrats all find a way to meet in the middle.