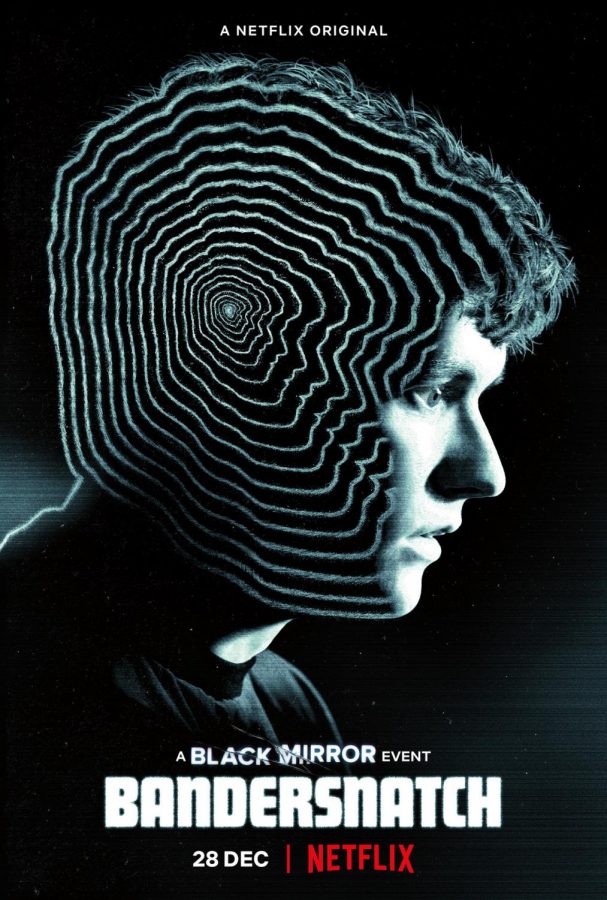 Netflix’s psychological thriller, “Black Mirror”, is known for its insights on modern culture. The show, most notably, deals with exploring human consciences and desires by showing you all these plotlines that if you weren’t looking for it, you would never find the deeper meanings of which the writers originally intended.

“Bandersnatch” was released on Dec 28 on the pitch that it was an interactive episode meaning that you, as the spectator, get to choose which direction the movie will go based on timed options. All in all, the lone episode amounts to around five hours of content, if you choose to explore every single choice and ending.

The plot of the single “Black Mirror” episode is that the protagonist, Stefan, played by Fionn Whitehead, is designing a video game in the 1980’s based off a book of the same episode title. The plot is very “Inception”-like as it breaks numerous fourth walls as the movie we’re watching follows the same “choose your own adventure” concept as Stefan’s book, which he’s basing his video game on.

Each ending results in a rating of Stefan’s game and depending on which path you as the player chooses, the video game can result between zero to five stars, five stars being the best ending.

The production of this episode took about eight months but filming it only took 35 days, which is surprisingly longer than any other shooting for previous “Black Mirror” episodes. The way the production team shot the episode is actually quite ingenious; rather than film the fillers, cut, then film each choice separately, it was easier for the cast to actually film each choice through and through as to keep the transitions smooth.

The episode itself is very meta, meaning that the show itself is, to some extent, aware that it’s a show. One of the video game developers Stefan looks up to and works with, Colin Ritwell, played by Will Poulter, breaks the fourth wall a lot. Without addressing the audience directly, Colin will often talk to Stefan as if he wasn’t a character in the show itself. For example, in the off-chance that you choose the option that Colin jumps off the balcony in one of the endings, he looks to Stefan and says, “See you in the next life.”

In addition to that, the concept of “Bandersnatch”, both the episode itself, Stefan’s video game, and the book he’s basing it off on, is the realization that the characters themselves don’t have free will and that someone is controlling them. The most notable fourth wall break deals with said concept.

To choose the more gruesome endings leads to Stefan asking if anyone is “out there” and to give him a sign and one of the options is to show him the Netflix logo, as to which he asks what it is. Going down that path leads to him mentioning the future, while going down the other path of choosing the branching pathway insignia can lead to him murdering his father and earning you a five out of five stars on the video game.

Being a “Black Mirror” episode, the point of “Bandersnatch” was to mess with your mind psychologically, to make you question what you think you already know. The episode has a lot to uncover and each ending has its own surprise.

Overall, the “choose your own adventure” interaction between such an extensive episode was a good idea for Netflix executives to include the audience in one of their more well-received originals. The concept of “Bandersnatch” is quite unique and audience responses to it are bound to encourage Netflix to start experimenting with it more.