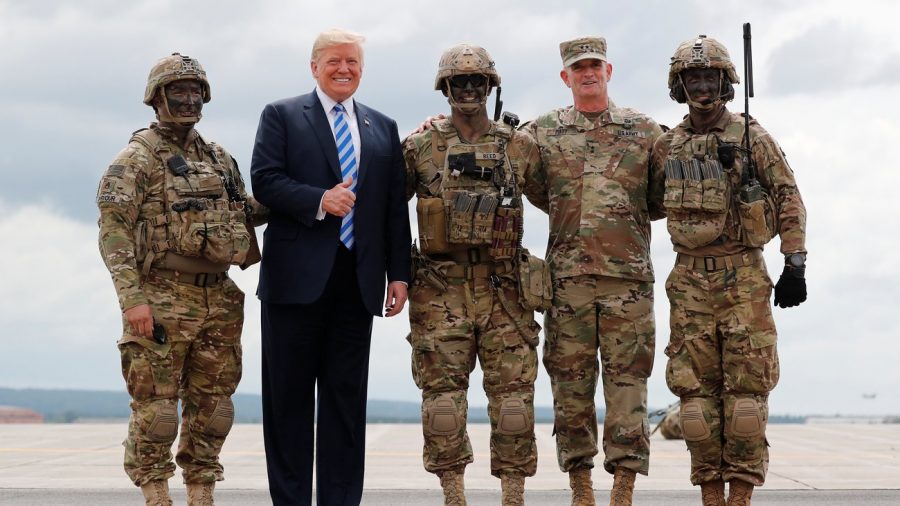 Donald Trump, pictured second to left, ordered 5200 new border troops to patrol the border in the wake of a caravan of Guatemalan migrants.

Border security has been a heated topic in the news, frequently mentioned in politics throughout the past decade. The issue was inflamed even more with Obama’s DACA programs and executive orders granting amnesty to more than 5 million undocumented immigrants. In current times, the US government has taken a complete 180 degree turn on the issue, attempting to end the DACA program and secure more border security funding to build Trump’s “beautiful, big wall”.

In the last week, a caravan of migrants numbering in the hundreds have been heading to the US-Mexico border, towards California. In early November, Trump responded to this by sending over 700 troops to the border to contain the unarmed migrants.

Trump strangely preached about the evils of illegal immigration a great amount on the campaign trail, yet once the election ended the administration went silent for weeks. Is the Trump administration going to back their actions up with bonafide legislation or will they stay silent on the issue now that the midterms are over? This is a question the nation will have to wait patiently to find the answer to.

Regardless, the entire problem Trump is trying to address with his border wall also lies within the failure of the system in place to approve immigrants for citizenship. There are currently 411 judges on staff to adjudicate a backlog of nearly 800,000 pending immigration cases, according to the Executive Office for Immigration Review. It takes immigrants more than a decade to become legal citizens, which is not feasible for people seeking asylum from harsh conditions or fleeing a deteriorating government.

It seems as if fear-mongering tactics were used in order to get Trump’s agenda across to his committed base of supporters. Now troops have had to miss the Thanksgiving holiday and may have to skip Christmas as well due to what could be a selfish political act. It was most definitely not necessary to send hundreds of troops, who can’t necessarily detain the migrants, to the border. Trump paints a picture of a ‘border crisis’. Sure, the immigration situation isn’t as good as it could be but it is most certainly not a crisis. The Sandy Hook shooting was a crisis. 9/11 was a crisis. The Boston Marathon bombings were a crisis. This border situation is not a crisis.

If the administration wants to fix the situation then they should look into fixing the system that’s causing the problem rather than blaming the very people that make our country diverse, the ‘melting pot’ it’s always touted to be. This problem is most certainly not unsolvable, but if we continue to face fear-mongering, political gridlock, and flashy show of force, the situation will stay the way it is and maybe get worse.