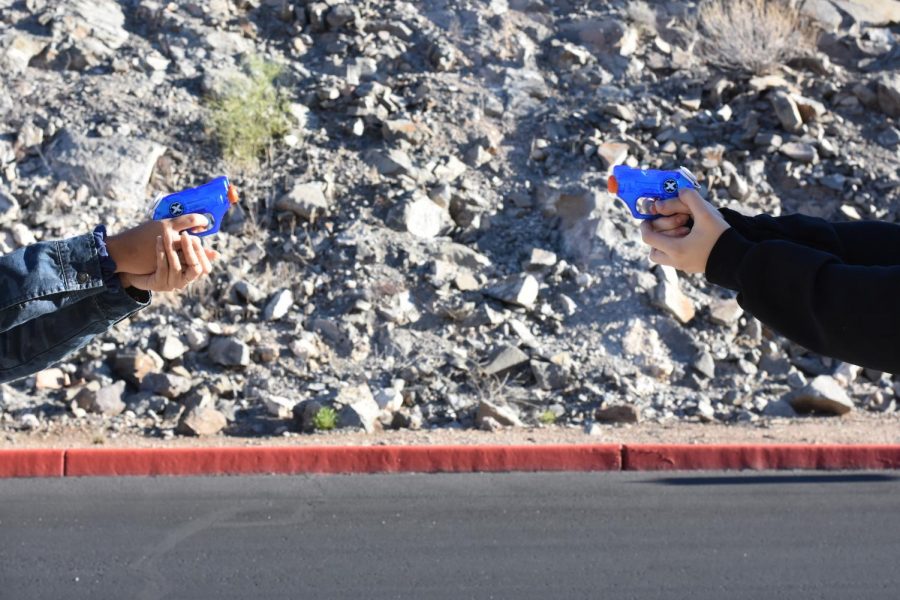 Two contestants square off with one another.

If you have been looking for an excuse to shoot your friends with water guns, now is your chance. OC Assassins provides a nice competition between friends who just want to drench each other.

The game is simple: dozens of students come together to split into teams of up to four to compete for a grand prize.

While the game and rules are basic, things are complicated for the players themselves.

The players are split into two groups. There is the casual players who didn’t mind much if they got out but are still getting people out when they could. Then there were the players who took it seriously.

People were going to extreme lengths to not be caught by other players and actually planning their weekends out just to avoid others either by staying home and never leaving or going super far out of town to not have a chance of running in to others.

This caused trouble for the players who wanted to just have some fun. “At first it’s fun because it is just friends shooting friends with water guns,” said Noah Thomas, junior.

Thomas explained that as long as people you knew were in the game, it continued to be fun and exciting.

“After the initial rush of getting each other out it gets boring because there are people you don’t know and can’t get close to and you just feel kinda stuck,” Thomas said.

These struggles are what really held the game back from being fun the whole time. It also wasn’t just one disgruntled student.

“I was a pretty laid back player so I didn’t get into it as much as everyone else,” said Austin Cooper, junior.

Even though Cooper didn’t try as hard, he still thought there were some factors that made him upset with how the game was played.

“It sucked some times because if you didn’t film the video perfectly you wouldn’t get the kill instantly,” Cooper said.

Filming was a hard part of the game because it was challenging to be casually filming without the target getting tipped off to the players presence. Videos would often be a little scattered because they were trying to be inconspicuous while also getting a shot of the elimination.

When students gave their opinions about it they mostly talked positively about the experience as a whole, but there was a lot of individual criticisms throughout.

Overall, the people that spoke of Assassins thought of it as fun at first, but quickly turned stale.