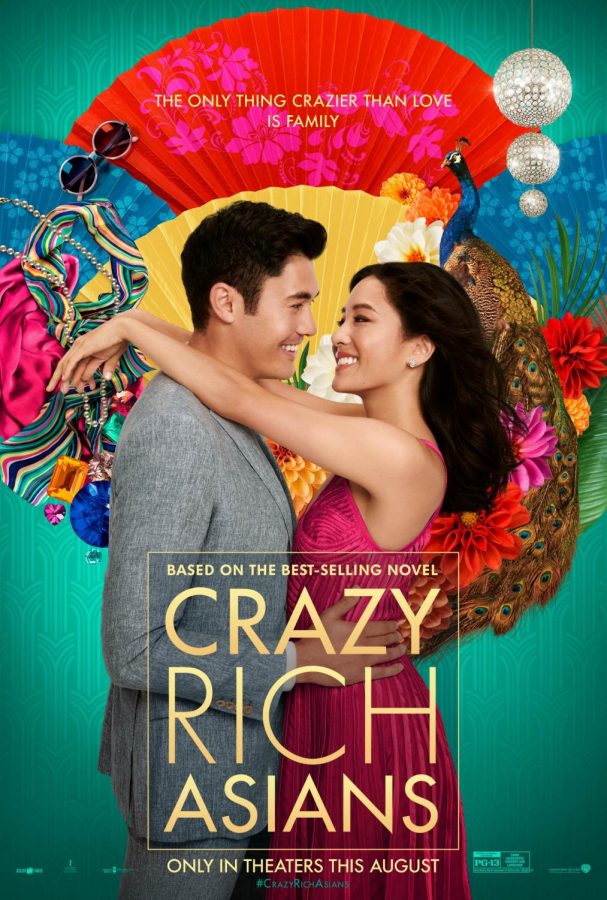 This romantic comedy arrived in theaters on Aug 15 to present a dynamic cinematic representation of the New York Times bestselling novel by Kevin Kwan. Filled with twists and turns, “Crazy Rich Asians” by Warner Bros Entertainment had a standout performance with the audience wanting more and more.

To start off, the movie follows Rachel Chu, played by Constance Wu, a young woman living a normal life in New York. On the other hand, her boyfriend, Nick Young, played by Henry Golding, is one of the most wanted bachelors in Singapore. There, his family lives an extravagant life of wealth and high status, but he spends his days as an everyday person with Rachel.

When Nick invites her to his best friend’s wedding, the “wedding of the year”, in Singapore, Rachel is excited to attend. However, she’s also nervous because Nick never told her about his family and wants to make a good first impression.

When Rachel sees the luxuries that Nick’s family has, she’s shocked. She always saw Nick as the guy who stole her Jamba Juice card and played basketball at a public court, never as part of a family who was “comfortable,” as Nick put it.

Rachel feels out of place with this contrasting lifestyle, especially with Nick’s mother, Eleanor, around. Eleanor puts family first and  isn’t accepting of the lower class so, of course, she dislikes Rachel. Still, she plans to win Nick’s mother over by standing up to his family and believing that love is more important.

Another essential part is how the characters are presented. Rachel Chu is an economics professor at NYU. She is close with her single mother, Kerry Chu, and lives a normal life with middle class status. Nick Young, however, is the son of one of the richest families in Asia and is the man that all women in Singapore have their eyes on.

Eleanor Young is Nick’s strict and professional mother who hopes that Nick gets the approval of his grandmother to become the heir to their successful business. The minor characters, Nick’s relatives and Rachel’s friends in Singapore, contribute to the story as well.

Nick’s relatives give an in-depth look into this upscale society that they enjoy and their personal problems that hide behind closed doors. Rachel’s friends encourage her to stand up for herself against the snobbish members of Nick’s family and add comedy into the mix. All of the characters, each with their own quirks, along with the descriptive story elements combine to create a unique love story.

Normally, the on-screen versions of books are known to be fairly dissimilar when both are inspected. However, there are not many major differences here. The minor characters’ background stories have been slightly altered when both are compared, but that does not deter from the storyline.

In the novel, it goes into more detail about Rachel’s discovery of her unknown father. Rather than take comfort in her mother’s arms when she arrives in Singapore, Rachel is furious and blames her for not giving her the truth. Later on, Rachel learns that her mother’s husband was abusive and fell in love in another man who became her father. She apologizes for acting rude towards her mother.

Adding on, the novel shows Nick’s reaction after hearing that Eleanor researched Rachel behind his back. He also wonders if they really are not meant to be. The movie takes this part away and focuses on Nick doing everything he can to win Rachel back.

Despite these changes, the overall theme and plot are not significantly reconstructed because the character roles and sequence of actions that take place relate to the original story by keeping the foundations of key parts.

As with all movies, a common theme appears to get the audience to fully understand the underlying motive as to what the movie is about. A theme that really makes a stand throughout this movie is that love overcomes social popularity and family control.

Rachel and Nick depend on their love for each other to act as a force against the society that attempts to drive them apart. Knowing that they have a connection is the impetus that keeps Rachel and Nick together, even though Nick’s society disapproves of mingling with people of a lower class.

Family control is an issue because of their views on Rachel and Nick. Nick’s family sees it as disgraceful because they want to keep their elite status in Asia, and bringing someone who has no impact in an industry disturbs them. Nonetheless, Nick and Rachel do not care about what his family thinks about them and they continue to fight for their relationship.

After examining the entirety of “Crazy Rich Asians”, it can be depicted as a roller coaster of events. Every scene draws you in with each plot and new situations that pop up out of nowhere. Overall, main ideas flow with the help of character developments and emotion-grabbers. The movie approaches the audience with a romantic insight filled with light-hearted comedy, upbeat music, and colorful settings. If you’re looking for a movie to catch your attention, go check out “Crazy Rich Asians” and experience the power of love.