Student of the Month: Does it need to change? 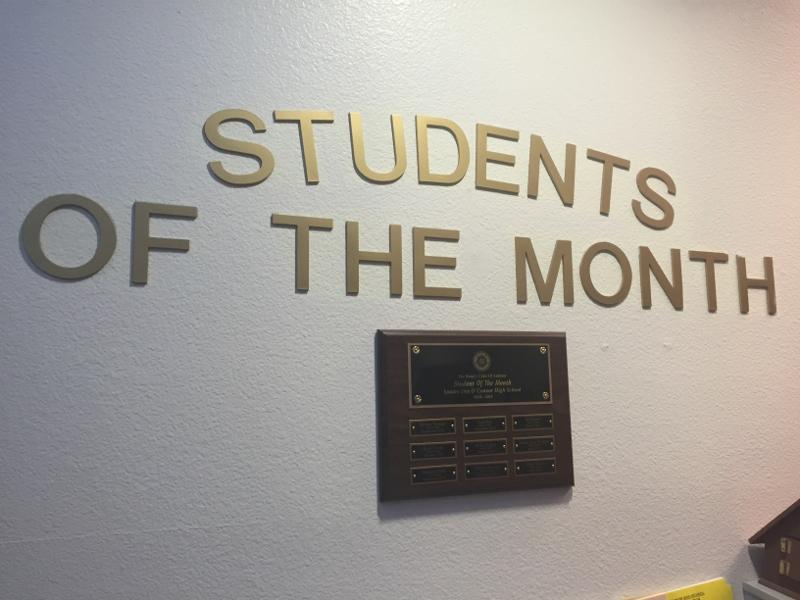 The Student of the Month plaque is displayed in the administration building.

The crowd has gathered and the excitement is settling in. Who will win the ever elusive Student of the Month award? In the blink of an eye forty students are handed awards in a rushed ceremony that must quickly get all the awards out rather than take the time to award each students’ excellence.

Student of the Month is a program which benefits the campus by encouraging excellence among all students however it suffers from its poor publicity and ceremonies packed with too many awards at once.

Student of the Month, run by Kathleen Giacini, counselor, is a system designed to award students who are excelling in class, are good citizens, who work their hardest every day and those who are deserving of recognition. It is run in October, November and four months in spring. An optional ceremony is held before school hours on a specified day during those six months.

Each month a certain amount of teachers from each department (CTE, English, Math, etc.) are to elect two students, a boy and a girl, and they can choose to include a script outlining the students’ accomplishments. Coaches can elect students and special cases may arise on occasion prompting a student to receive the award, such as a student having a high score on the National Merit Scholarship Qualifying Test.

The program is poorly publicized. Teachers who neglect to inform their students of their recognition leave them wondering why they were elected. I hadn’t heard of it until being elected once myself and the same has happened to some of my friends. The majority of students on campus don’t even know that the Student of the Month exists.

Every teacher on campus is included, except the ones who do not submit any students due to complications such as not meeting their deadline. This means about 15 to 20 teachers are involved in each of the six months, who each elect one to two students which translates into at least 30 to 40 awards at each ceremony.

The glaring issue with the current system is the sheer number of awards being handed out at the six ceremonies. Each teacher in the school is involved, most electing two students for each ceremony putting too much onto a system designed to reward excellence, turning it into a very rushed ceremony.

Student of the Month has a great purpose and Giacini’s efforts for the program are admirable. However the poor publicity of the program and the excessive amount of awards being handed out at once harm it greatly.

For Student of the Month to improve it needs to be spread out among more months of the year. While it may take more effort to increase the amount of months it would alleviate the issues posed by the excessive awarding in the six allotted months.

A stronger push on the advertising side of this program is also necessary to improve it. This would especially help students recognize that doing the right thing is always awarded. A change like this improves not only Student of the Month but the whole campus.

Student of the Month is very beneficial to the OHS campus albeit limited by its own shortcomings. If the program were to push the aforementioned aspects, then it could really push itself as a program that awards excellence by being even more excellent itself.