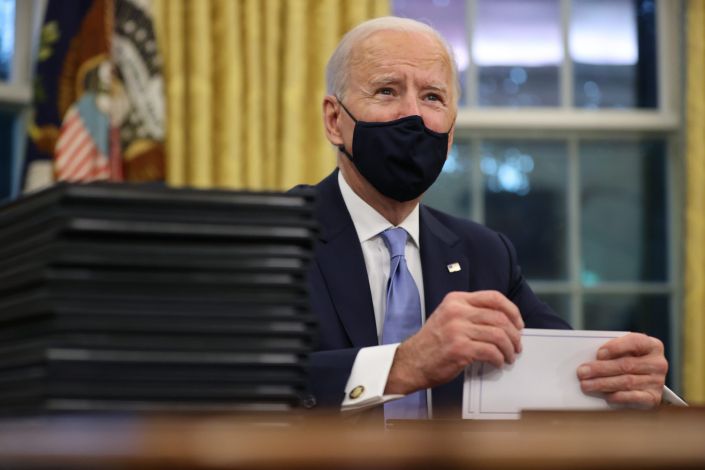 President Joe Biden, on his first day alone, signed more than a dozen executive actions, with some of them being to reverse decisions made by former President Donald Trump.

The most popular of these actions revolve around changes to the US response to COVID-19 and how the government will aid the financial strain of Americans. All while the few reversing actions done by former President Trump surrounds issues like climate change, immigration, and regulatory changes.

President Biden’s first executive order, the “100 Days Masking Challenge”, asks Americans to wear masks for 100 days, and requires masks and social distancing in federal buildings and on federal land. Along with that, he urges that state and local governments do the same. Biden also stopped the US withdrawal from the World Health Organization and plans to re-establish the US as an active leader.

The US will also be rejoining the Paris Climate Agreement while under Biden’s administration, which would be a reversal of a decision made by former President Trump. Looking further into environmental changes, Biden also canceled the Keystone XL pipeline and has agencies review and reverse more than 100 Trump actions on the environment. All of such actions were described as “harmful” by Biden’s climate adviser, Gina McCarthy.

Biden reversed Trump’s “Muslim” travel ban, which in 2017 restricted travel and immigration to the US. for passport holders from seven Muslim-majority countries. Biden will also end the national emergency, which was declared by the Trump administration, to halt the construction of the border wall and end the funding.

As for regulation, Biden has directed White House Chief of Staff, Ron Klain, to develop recommendations of how to modernize regulatory review, which undoes Trump’s regulatory approval process.

This has left Biden with already offering a small view of what direction President Biden wants to take the United States for his next four years in office.