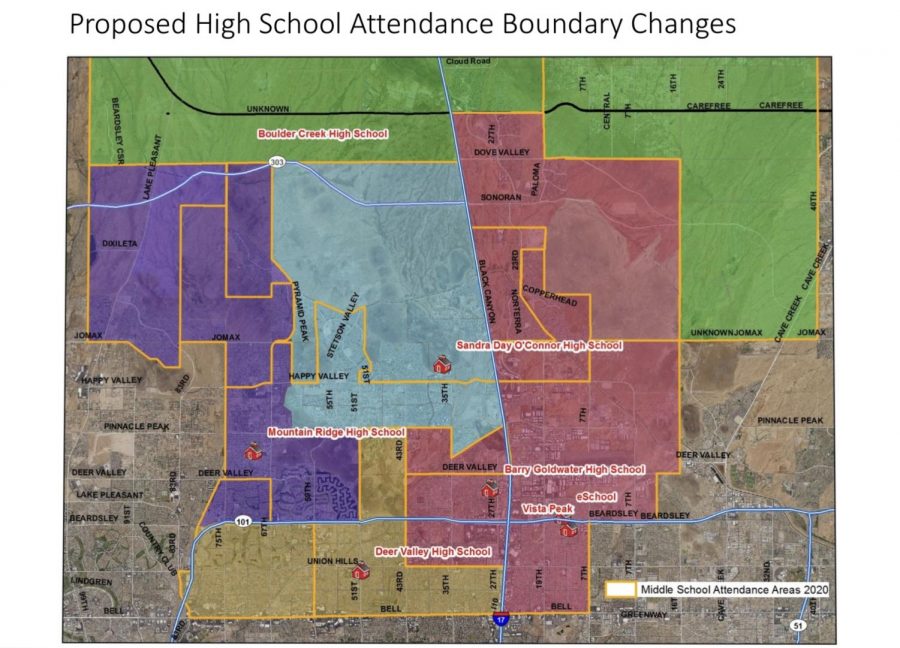 These new boundary changes will be implemented to balance out DVUSD school populations.

The Deer Valley Unified School District met at the beginning of the second semester to discuss the problems involved with student enrollment. Populations in schools in the district were not properly balanced, with more students filling some schools and leaving others with a low population. As a result, the governing board proposed a solution to this problem that could ultimately affect future generations of students in DVUSD.

On Jan 28, the governing board sought to balance their enrollment, particularly in five DVUSD schools: Boulder Creek, Barry Goldwater, Deer Valley, Mountain Ridge, and OHS. Along with the future production of a new elementary school for the district, Elementary 31 at Union Park, it was discovered that OHS was leading in enrollment. In order to provide boundaries for the new school as well as increase populations in the other schools, the new boundaries plan to alter the locations of where students would be coming from. Specifically for OHS, students from the West Wing location will be affected, but according to Dr. Lynn Miller, principal, the impact will not have a huge effect for OHS.

“So for us, it’s not going to hurt our enrollment. It would change the location of where the students are coming from, so instead of our students coming from West Wing possibly, they may come from somewhere else from the open enrollment list,” Miller said.

This year, OHS started with 2700 students, but now, the west side boundary will now be further implemented into Mountain Ridge territory. Even with this change, OHS will not lose its enormous population immediately.

“OHS is doing very well right now; we’re very blessed, and as I said, we have 370 plus students that are wanting to come here, so we typically get about 150 from West Wing. I do not want to lose anybody from West Wing because I love all our kids, but if it’s a decision that the Board made, that it was better for our district, to help other schools build…we might go 150 to 200 in with our open enrollment for our freshmen, so if we have to go further in that open enrollment list to 370, we could accommodate for those students that might not come,” Miller said.

Some problems for students at West Wing pertain to where exactly they would go for high school. In this case, for eighth graders this year, they are automatically grandfathered into OHS but will only receive bus transportation until 2022, once they are sophomores. For the upcoming years from eighth grade and below, if they have siblings at OHS, they are also put into the system to go to OHS with no bus transportation. Otherwise, the new boundaries make it so that all other West Wing students would have to go to Mountain Ridge, but OHS is still providing students with options to figure this situation out.

“Students at West Wing that are going to have to now go to Mountain Ridge, they have the first opportunity to submit open enrollments and still be grandfathered into OHS, so they still have that option,” said Justin McLain, assistant principal.

The transportation issue for West Wing students brought much confusion since some will receive bussing, depending on their situation. Dr. Miller mentioned that the district saw the eighth graders moving onto junior year having the means of transportation by car, and for the eighth grade and below for future years, it seems that bus transportation will also have to accommodate new boundaries with their routes. Regardless, the administration is confident that these issues will not take away from the integrity of the school with its influx of students and abundant resources on campus.

“I don’t think it’s going to impact our school very much. I think that our school is a model school. I think that O’Connor, being an A-rated school, having good academics, a large variety of clubs and activities, and a robust athletic program, I think the culture and the climate at OHS from the administration to the office staff to all staff in general to the teachers, is what makes our school so great,” McLain said.

Over the years, Dr. Miller has noticed considerable improvement and growth from OHS. When it comes to the future, even with all of these alterations from the boundary plan, he foresees the school’s population to be at 2600 to 2700. He believes that the boundary changes will soon level out for all of the DVUSD schools affected while still maintaining OHS’ status as a great school.

“What I know of my staff and all our students and our community, we’re on that trajectory and to stay the best that we can be for a long, long time,” Miller said.

Although the students at OHS, particularly the freshmen this year, will not be affected by the new boundaries, those who live at West Wing see this as an opportunity for the school to receive a variety of students throughout the district.

“We’ll just get different kids; things will move around, we won’t get as many kids from West Wing anymore, we’ll get some kids from different areas, so might be a fresh change,” said Matthew Marcoulides, freshman.

Overall, the boundary changes were created to sustain a well-balanced district for the schools and their students. Although there might be positive and negative points to this plan, the welfare of the district is always a top priority. Throughout his seven years of dedication at this school, Dr. Miller finds that the boundary changes will support the community that is cultivated by OHS despite the fact that some students may have to attend a different school.

“As long as I am here, and as far as I can control O’Connor, we are the best we’ve ever been, and we’re going to continue to get better,” Miller said.