Australian bushfires ravage across the country 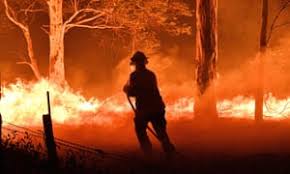 Australia has been known to inhabit dangerous or fairly terrifying animals that tend to spook those who are not from there, but what people see if they look a little closer is a cultural phenomenon. Everything from the people, to the location, makes for one of the world’s most beautiful and sought after sanctuaries. However, in the past months tragedy has been prominent in Australia, as its natural wonders and fantastical wildlife have been ripped away.

Devastation struck the country in September as a result of a serious drought, and since then, the infamous bushfires have continued to rage across the continent razing everything in their path. The amount of land scorched has now surmounted that of the 2018 California fires, and some are now fearing that the bushfires are a preview of a rough wildfire season ahead for California.

28 people and an estimated one billion animals have died across the 42 million acres the fires reached, and with every passing day, more is added to the totals. In an attempt to offer aid, firefighters from the United States and several other countries are flying to Australia where they were met with applause and commended as heroes. Although, being a first responder is not a requirement, anyone can make a donation to the Red Cross or contribute in some way to support the fire relief effort. Whether it be money or supplies, help is always welcome.