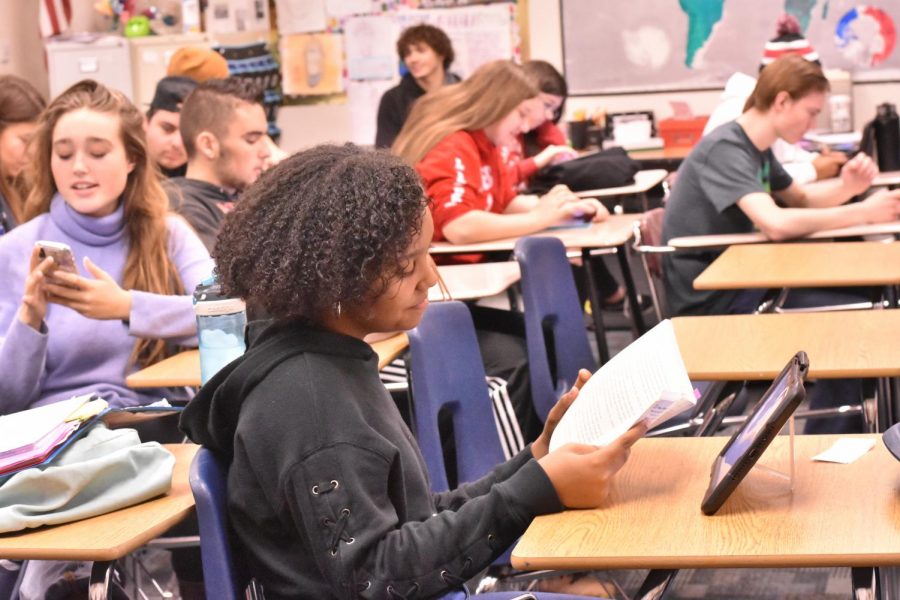 Throughout the years, OHS has been considered a B rated school in Arizona, but these conditions did not satisfy high expectations. To be an A school, ambition and success must combine together in order to earn the rating, and the leaders of OHS responded with such changes to incorporate all of the necessary requirements into the curriculum. This year, it was announced that the school received an A rating for the first time since AZMerit was implemented, and it is a clear example of the hard work that went into it.

The A rating is a reflection of the 2018-2019 school performance, where students showed much improvement and excellence, especially through their test scores. This can be attributed to Project Momentum, which is a movement introduced to schools all over the country to bring an increase in student achievement. With the help of Project Momentum, teachers have received guidance on curriculum.

“I think, with the implementation of Project Momentum that we started a couple of years ago, that has impacted the way teachers are giving instruction, and also deciding what the content of the instruction is,” said Kimberly Parker, English Language Arts Department Chair Head and ELA teacher.

Along with more assurance on the educational format, Project Momentum brought much needed organization with level teams. In these teams, teachers of the same subject meet to review Arizona standards for school education, and give out Common Formative Assessments, which are the same for the classes of certain subjects. They calculate the data and figure out whether or not students are doing well.

“And so, then they would look at that data that the kids did on the quiz or the assessment and decide, ‘Did the kids learn it? Did they not? And if not, why not and what can we do?’” said Brad Brazell, Assistant Principal. “So, that was a big reason why, is that we had a lot more focus on the teachers’ looking exactly at the standards, and how to teach those standards in the best way and in an engaging way.”

Teachers have found that as the standards within a classroom have reached a high point, students are more likely to improve as well.

“And I think by zeroing down on the standard and giving students an opportunity to reach mastery, it has definitely helped us to earn our A label,” Parker said.

Not only are the students’ achievements credited, but teachers’ efforts to change things up in their teaching styles benefited them in the long run.

“The other thing is, is the teachers have and continue to work really hard to make sure that each student’s successful, and so those things coming together last year, I think is the main reason, for getting that A rating,” said Cindy Knoll, Math Department Chair Head and math teacher.

Ever since the school received its last A rating in 2013, which was based on different standards from AZMerit, this recent success for the school boosted confidence with an award that teachers felt OHS deserved.

“I think it backs up what we’ve always felt about our school,” Parker said. “I’ve always believed that our school is an A school.”

Of course, the rating also comes down to the students, whose results determine the school’s future, and they did not disappoint. Specifically, students have shown real growth when it comes to tests.

“I can contribute the success to mostly the students in the fact that, I think they actually took the tests for the AZMerit seriously and did their best on them,” Knoll said.

Last year’s AZMerit testing added to students’ efforts, as well. The grade enhancement policy allowed grades to be moved up a letter grade on the ELA, Math, and AIMS Science tests. Proficient or Meets the Standard allowed students to move their grade up to a B, and those with Highly Proficient or Exceeds the Standard were able to move it up to an A. With these possible rewards, students were enticed.

“So, that [grade incentive] encouraged students to do well, and we had a large number of students that benefited from that,” Knoll said.

Even if the rating was not given to the school, teachers believe that it will not stop their students from reaching for the stars in their education.

“I teach all honors classes, so those students are very motivated to begin with, and so I just try to help them learn and grow as much as they can,” Knoll said. “So, in terms of the A rating, I don’t know if that affects them as much because they’re going to work hard no matter what.”

Now that the A rating is under its belt, OHS is already looking towards successful expansion. As the school becomes more well-known, the significance of the rating is emphasized as the goal to attract new students is more possible with it.

The future for teachers and students alike seems to shine a little brighter with a stronger title and rating. For years to come, improvement does not plan to stop as the school continues to grow in numbers and achievements.