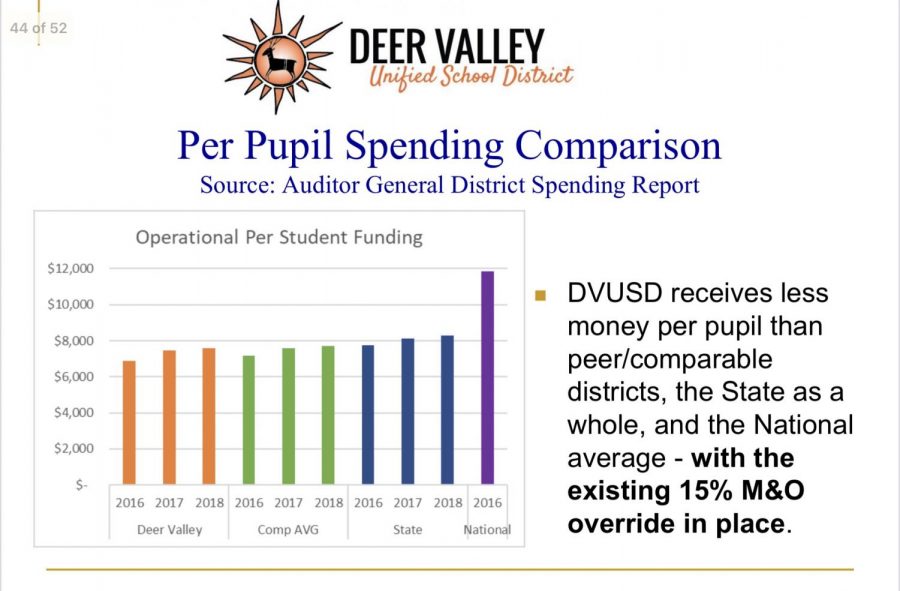 In the 2019-2020 school year, the Deer Valley Unified School District’s Governing Board has plans set in motion for the upcoming M&O (Maintenance and Operations) Override and Special Bond Elections. These mail-in elections are for further development of schools in this district through the approval of funding. Voting is a main focus of both elections as they will determine the possibility of funded benefits in individual schools.

On Oct 7, people had the last chance to register to vote for the mail-in only elections, and voting by early ballot was on Oct 9. Ballots that were ready for mailing were available on the first date of Oct 15 with the last date on Oct 25.

The State of Arizona allows a certain budget for funding of schools, but the override makes an exception. With the support of voters, an additional amount of funding would exceed the budget and continue to provide local benefits for school programs.

The phase down period of the 2015 override caused an issue for the governing board, and so on June 25 of this year, authorization of the 15% override was approved.

With the M&O Override put into place, it would mean substantial improvements for schools in the Deer Valley Unified District as funding is always a problem that needs to be solved. If the amount of votes needed is reached, more resources can be distributed, specifically to the various programs that schools have to offer.

Heather Carter, Arizona State Senator from District 15, adds that programs, such as fine arts and physical education, would receive the financial support they need to continue within school guidelines and increase the quality of such programs, as well. These resources would be staffed sufficiently so as not to raise concerns about a lack of support.

Also, this financial boost would pay for teachers and staff who are highly qualified for their job descriptions. In doing so, this would benefit the students as further improvements in the structure of education adds to their knowledge and understanding about specific courses that students take interest in.

If the M&O Override Election is a success, the impact it would make would be quite incredible. For homeowners, the override costs less than $19.23 a month, which is based on the average assessed home value for the people in the State of Arizona. Since the override is funded for a maximum of five years, it is necessary to continue voting for the issue at the end of every term.

Financial damage to the school is inevitable if approval for the override is rejected. During the phase down of the 2015 override, the Deer Valley Unified District would have to reduce the budget for funding by over $9 million, impacting school programs along with it, like electives and support services. So, voting is very important as it is the solution to repairing the loss caused by insufficient funding.

For the 2019 Special Bond Election, the focus is on the overall welfare of the students and the school. Just like with the override, funding has been cut over the years by the state, which has caused budget deficits for schools in the Deer Valley Unified School District. However, the governing board has proposed funding of $175,000,000 for the upcoming Special Bond Election.

With this huge financial gain, the district would have the ability to fund even more structural programs in schools. The Bond mainly focuses on aspects of welfare, such as safety, infrastructural planning, and the growth of technology. And according to Christine T. Henry, Co-Chair of Deer Valley Votes 4 Kids, these aspects would continue to support the students, as their academic excellence is a top priority. The approval of the Bond would come with many benefits as seen by some Deer Valley schools.

Voter-supported funding at Hillcrest Middle School allowed the expansion of classroom buildings and extended areas for STEM classes and a Student Health Center. Even the students at Barry Goldwater High School have successfully been able to open a restaurant called Avenue 27 at their school, where the culinary students show off their skills with a fine dining experience.

From these accomplishments, more growth can be seen for the future of several other schools within the district, as well. If the Bond goes through, OHS would see a massive upgrade to school features. Such upgrades, like media center renovations, infrastructural improvements in plumbing and energy conservation, and further developments in the use of technology would greatly help the teachers and students with curriculum while keeping a safe atmosphere at all times.

Taxes for the Bond amount to $13.28 a month, which is also based on the average assessed home value. To add to the benefits, the district plans for the funding to not increase from the projected tax rate, making it more efficient for taxpayers. So again, voting is essential when it comes to making a change to the conditions of the school, both in the development of educational and infrastructural purposes.

Election Day is Nov 5 and for more information about mailing ballots and full details of both elections, the website is https://www.dvusd.org/election.