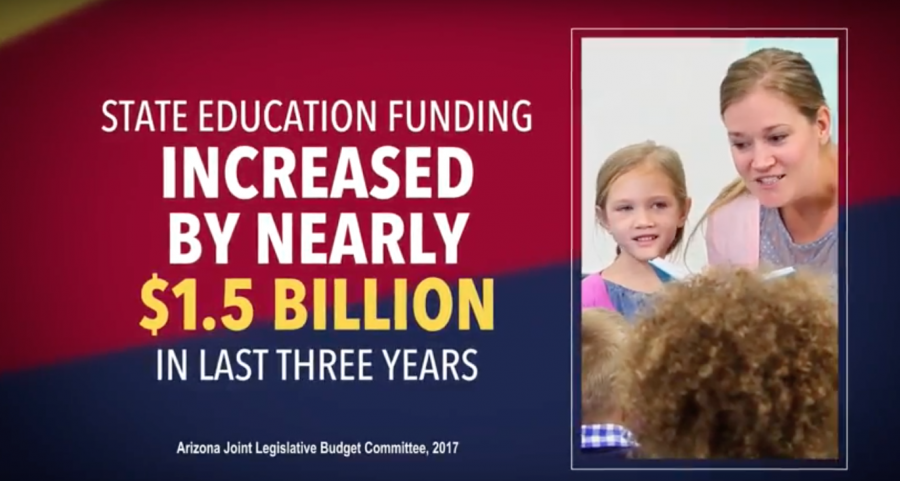 Recently, advertisements have been airing on the Phoenix airwaves, touting how Arizona schools are making rapid progress. However, teachers are not so enthralled with these bold claims when they themselves have not experienced the benefits.

Many teachers, and students who have a parent who is a teacher, do not believe the statistics and claims made by these advertisements, put out by a group named Arizona Education Progress. This group is funded by businesses and corporations supporting Governor Doug Ducey’s actions on education, according to the coalition’s spokesperson.

Jessica Lindenmeier, history teacher, explains the motivation behind the airing of these ads throughout the community.

“I think that they’re trying to persuade our population that we’re doing what we need to do in order to quell some of the problems that teachers have been facing,” Lindenmeir says.

Some of the accomplishments claimed include an increase in funding, totaling in the hundreds of thousands of dollars, as well as the highest improvement rates in math and reading since 2015.

“I’ve heard that apparently the median wage is $45,000 for a new teacher but I’m not seeing that… I don’t really see that anything is being done,” Davenport said.

Kaelen Wilber, junior, is exposed to the situation as his mom works as a principal at Mirage Elementary. Ultimately, based on what he is exposed to his mom does not see the increase in funding to schools.

“We were watching an ad saying schools are getting more funding now, but my mom was looking at it and being like ‘I’m not seeing that money’… it’s a lot about money and budget at their school, and they are always cut short,” Wilber said.

The highest level of reform that teachers have generally been exposed to is limited to the school specifically, rather than throughout the state. Kari Johnston, English teacher, believes this.

“I think here at O’Connor we’re making progress, with Eagle Hour and everything,  but I think that’s more of a secular thing… schools in general, not particularly,” Johnston said.

An historically poor area of Arizona’s education system is teacher pay. According to teacherdegree.org, a database collecting statistics on teacher salary across the nation, mean salary for teachers in Arizona is less than $43,000, more than $15,000 lower than the national average.

Danell Stephenson, English teacher, doesn’t believe that teaching is a profession where everybody can afford to stick with it.

“Teachers make their own progress because they’re doing it for the right reasons. But financially not every teacher can stay,” Stephenson said.

Although the situation is fairly dismal according to teachers’ comments about pay and lack of progress, there are some solutions they have offered to help the system improve and become better for present and future teachers.

“I think it would really help to retain teachers and part of that is pay, but also better working conditions just with supporting teachers,” Davenport said.

Along with the factor of pay, multiple teachers believe in other factors that could potentially make the workplace better for teachers.

“I think its a two-pronged system… pay is very important, but it’s also the fact that the world doesn’t see us as professionals, as people who really do take our job seriously,” Lindenmeier said.

Consistency in the content teachers are expected to teach and the standards teachers and students alike are held to play a big role on the system as well, according to Johnston.

“In terms of education, I feel like in the 4 years I have been here, something changes or how we teach and I have to learn something new… so more consistency throughout,” Johnston said.

Ultimately, the view of teachers as professionals who strive to improve and become better would help justify to the state much-needed reforms and create a significantly better environment and circumstance for them, according to Lindenmeir.

“We spend a lot of our own time and hours making ourselves better teachers, and if the world could see us and our state could see us as professionals and not like glorified babysitters, I think that would solve a lot of our problems,” Lindenmeier said.