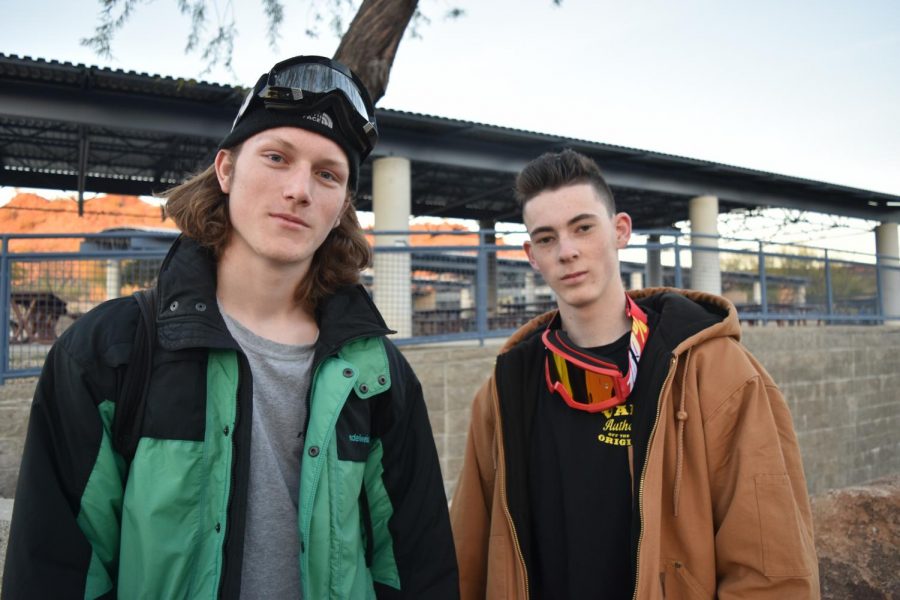 Gallery|8 Photos
Ethan Gilchrist
(Left to right) Drew plutowski, senior, and Finn Flaherty, junior, don their snow gear in from of the cafeteria.

Campus gets chilly for OC Olympics

Students arrived on campus as if they were athletes arriving to Seoul this Wednesday, each with their eyes set on getting the gold. Campus was covered with goggles, beanies, giant snow coats and other unique pieces of winter attire for the “OC Olympic” spirit day.

The spirit day’s theme was “Arrival or Ski Lodge” featuring cold attire and snow gear, but some difficulties were experienced with a high of 80º F. Students became “Olympians” by dressing up to build hype for the coming assembly. “OC Olympics” is bringing the Winter Olympics straight to Arizona.

“I just found a ski jacket in my closet so I thought hey why not,” said Caleb Gamble, freshman.

Gamble fit right in for spirit day as he geared up in a large black ski jacket that he had wore to a snowy Montana years ago. Overall he said the spirit week has “been fun,” but he added that his thoughts were different when comparing this spirit week to the last one.

“I think halloween was more fun just because there were more things to do and yeah just more people did it, but it’s not over yet there’s time,” Gamble said.

Not all students share this view. Anson Zhu, junior, dressed up everyday with friends so far and shared opposite feelings to Gamble preferring this week for it’s simplicity.

“Last one was definitely different and it’s fun,” Zhu said. “But it was definitely harder to dress up for so I like this one because I know that I can do every day.”

Zhu’s snow board jacket, beanie and goggles all came together from her common trips to go snowboarding. She also said that she has noticed more “people dressed up and way more than last time.” Zhu is “excited” to see the assembly.

Dailee Jackson, junior Stugo Representative and assembly committee member, started early planning for the sprit week in October after the end of the first one. She shared details on the assembly.

Stugo set up the spirit week to be, as Anson Zhu said, simple, but they couldn’t predict the heat.

“We tried to make it as easy to dress up for as possible. Pajama day: I think a lot of students dressed up, and then workout day a lot of kids [had] workout clothes so I think that was a good turnout,” Jackson said. “Then today for the winter gear of course we didn’t know it was going to be the hottest winter.”

Jackson said the theme is perfect because it’s experimental.

“I don’t think we’ve ever done this theme at O’Connor. Not a lot of other schools do it and the winter olympics only come once every 4 years so it’s unique and it’s the right timing,” Jackson said.

One student on campus wore snow gear for only the second time in his life for the spirit day.

“I went snowboarding on Saturday and I had the gear and I thought it’d be kind of cool to wear it today,” said Drew Plutowski senior. “I’ve only gone [snowboarding] once and it was my first time, but I learned pretty quickly.”

Plutowski has been on a surfboard, wakeboard, longboard and skateboard, leaving only the snowboard to try.

He agreed that the weather was a detriment to the snow gear theme especially with his jacket, beanie and goggles.

“With the snow gear [and] with the weather we have right now, this is pretty warm,” Plutowski said. “That’s why I’m keeping the jacket open because if I closed it I’d pretty much overheat.”

Plutowski refused to remove his snow gear even facing the weather because school spirit is important to him.

“Send it all the way. You know go all out no matter how hot it is. It’s spirit week you’ve got to dress up, you’ve got to participate and be a part,” Plutowski said.

He added that the weather has prevented some people from participating. He also said that even though pretending that it’s snowing at OHS is a nice change-up, he wouldn’t like it to be a reality.

“I like visiting the snow,” Plutowski said. “I wouldn’t prefer it here because you don’t have to shovel sunshine.”

The assembly will wrap up the spirit week which Plutwoski is excited to “have fun” at. Stugo’s ultimate goal with spirit week is to promote a connection between all students, and the more students participate the better this goal can be reached.

“Lowerclassmen need to step up their game and don’t worry about what other people think because it’s spirit week, Plutwoski said. “You’ve just got to dress up, send it all the way, go all the way and if you get a group that’s even better.”