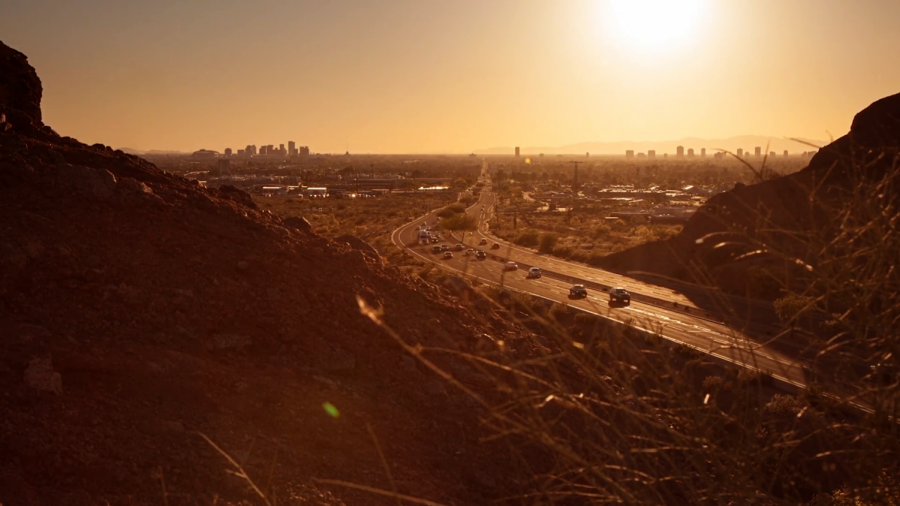 Photo courtesy of Video Blocks user Clippn. A screencap from the timelapse of an Arizona sunset taken above a highway.

For the past few years, it seems as if the winters are slowly becoming shorter and shorter. And in a never-ending summer city like Phoenix, it’s a prominent issue. One that must be talked about with a great deal of caution.

According to NASA and the Goddard Institute of Space Studies (GISS), the world is getting warmer. Based on their ongoing temperature analysis, one degree per year.  Whether the cause is a flux in natural climate, or the result of human activity, it is becoming a major problem in a dry heat state such as Arizona. AZCentral reported 130 people died of heat related causes in 2016, in Maricopa County alone.

Mackenzie Moore, junior, has found concerns beyond our backyard, as to what effect this seemingly small raise in temperature is doing to other residents of the planet.

“[There isn’t a benefit of rising temperatures] that I can see. There are a bunch of posts going around twitter of polar bears and they do not look good… I don’t see how the rising temperature can be helping anyone much,” Moore said.

AZ central’s Brandon Loomis reports that due to the all around shift in the earth’s temperature, Phoenix soon could be suffering and sweltering even longer than these past years. Climate researchers such as Daniel Swain, climate scientist, of the University of California, offer the data to this research.

“Phoenix’s all-time high of 122° will look more like the typical yearly high later this century, and they say the city could see a new record over 130° to rival Death Valley’s world mark,” Loomis said.

Phoenix will continue getting hotter, according to Loomis. However, even small things can be done to lessen the effects of this climate change. A small act becomes many that may soften the blow of the heat on the people of Phoenix.

Lauren Kisicki, junior, considers that we have done the damage to cause the changes, therefore we are responsible in trying to delay such damage.

“The earth has never been through what we’re putting it through with new technology. All the stuff we’re putting into the atmosphere and into the oceans. It’s never been through this before, so obviously if it’s making a really big changes, it’s because we’re making a really big changes. We all need to hold ourselves personally responsible, and take some initiative as individuals, in order to help the planet,” Kisicki said.

Sara Eick, biology teacher, believes that the damage is done, and we need to take it seriously.

“Science doesn’t care what you believe in. It is what it is. This is happening. We’re not trying to be touchy-feely kumbaya. It’s happening, things are changing, and [what we’re doing] isn’t helping.” Eick said.

Melissa Mara, AP Environmental teacher, weighs in on one of the best things we can do, both for ourselves and for the environment.