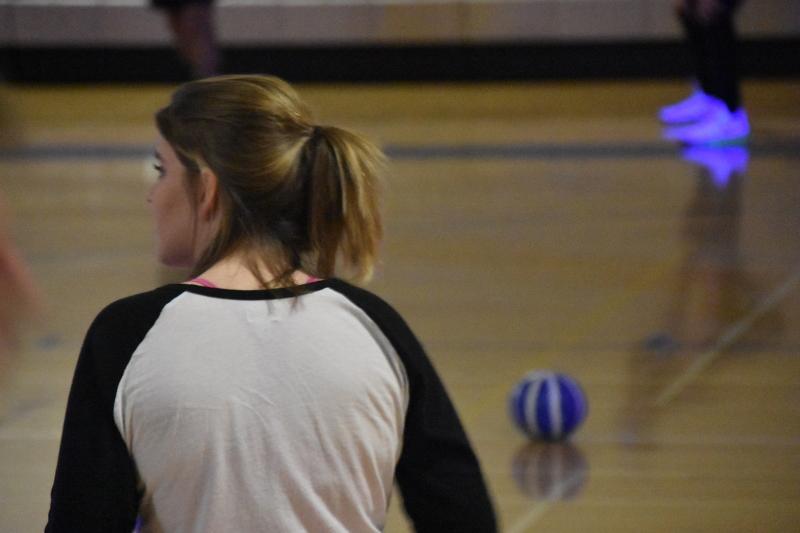 Students give it their all to ‘dodge, duck, dip, dive and dodge’ their way to victory at the annual dodgeball tournament held by OHS that took place on Jan 26.

Several teams took to the court, each one with an interesting name, like the Tiger Banshees and the Dill Pickles. Even more interesting were the Bachelors, a team of all boys playing in dresses.

Two teams would play at a time at each end of the court for a total of four teams playing all at once. winner of each team slowly working their way up to the ladder of victory.

This year’s dodgeball game was different. All of the lights were turned off and black lights shined down on the court, lighting up the students clothing as they played.

“Four years ago we did black light dodgeball and we wanted to bring it back,” said Baylor Gibbs, Stugo treasurer.

It wasn’t just black lights, Stugo also hired a DJ to play music for the duration of the game.

There were not enough teachers playing this year in order to have a teacher team, but there were some teachers and staff playing in the mix of it all, like Julie Pickle and Zachary Freund.

“We came out to support all of the teams,” said Sydney Savoy, sophomore, who was there to cheer on her friends.

Each team worked hard, but at the end of the night, there was only one winner. The Bone Squad was the champion for the night.