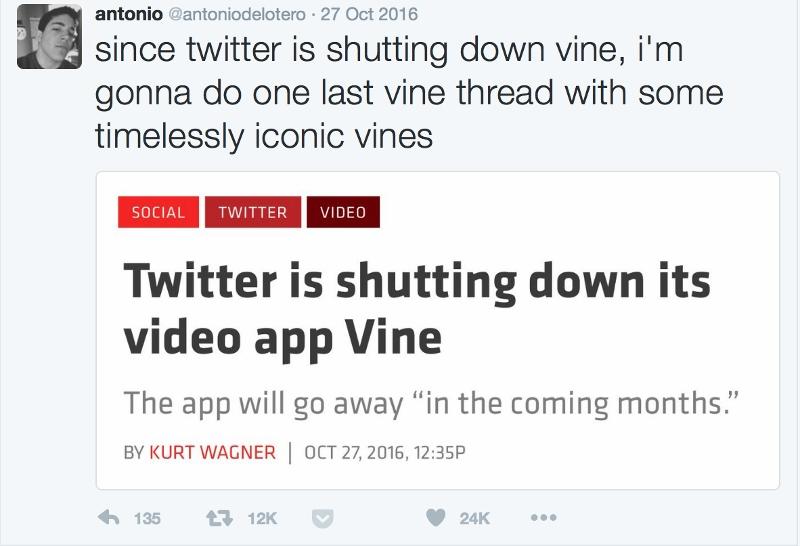 Reactions on Twitter to the news that Vine is shutting down

After a short three year run, Vine discontinued the app as a social media platform and replaced it with “Vine Camera” which still allows users to make six-second loop videos but cannot post or share them on the app itself.

For three years, the social media app Vine has been providing the internet with memorable videos for children and adults alike to laugh at. These short six-second videos, called “vines”, in turn, put a whole new meaning to “viral videos” and contributed to viral trends and youth culture.

Vine was founded in June 2012, which was then bought by Twitter later that October before officially launching in January 2013.

The app, according to The New York Times, was having trouble with their biggest stars moving their influences to more profitable areas, mainly YouTube, Instagram, and Facebook as it is easier to reach out and make more money there. Vine was struggling to profit and therefore had to cut down jobs.

Many protested the discontinuity as the videos provided a common bond between internet users as other apps Twitter, Instagram, and Facebook exploded with memes from vines themselves, trending the hashtags #savevine and #RIPvine.

In memory of Vine ending, vine compilations were posted on YouTube with people’s favorite vines and Twitter “threads” with “iconic” vines circled around the internet.

Although it is unfortunate the beloved app has been discontinued, it is understandable that Vine had to change its form under the circumstances the company had been through. Fortunately, these six-second looping masterpieces can still be achieved through the app’s recent update, Vine Camera.