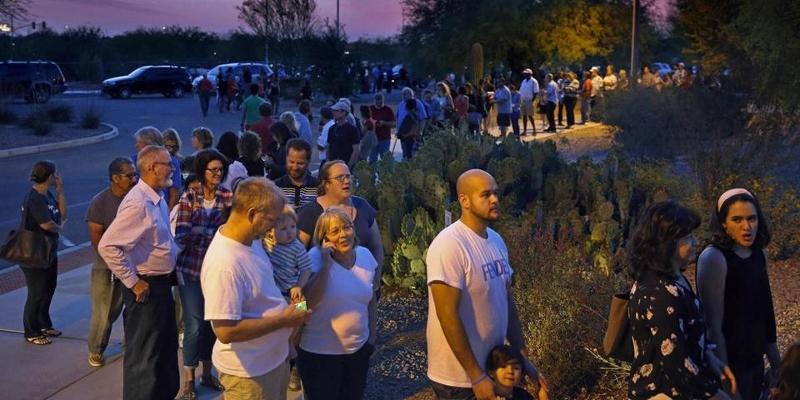 People waited in line in Chandler, Ariz. to vote in the state’s presidential primary on March 22.

Long lines, chaotic crowds, and people leaving in disappointment. All elements of Arizona’s idea of a proper primary voting system.

The Arizona Democratic and Republican presidential primaries were March 22 with Hillary Clinton and Donald Trump declared the winners.

This primary was riddled with controversy and voters are accusing the issues as an act of voter suppression.

Voters all over were forced to wait in line for lengthy amounts of time due to the amount of polling locations in Maricopa County decreasing from 200 to 60. Many Democrats were also turned away due to an error in the voter database that mistook them for independents.

OHS students have faced this controversy first-hand, such as Brandon Collamer, senior.

“On the day of the primary voting I went with my mom and dad to go vote at a church that’s nearby our house, it’s one of the primary stations and the line was really long and my parents were explaining how the number of polling stations got cut down by hundreds,” said Collamer.

Along with having to wait an extremely long amount of time, Collamer was also denied the right to vote altogether.

“I had registered as a democrat and I went to where they checked your information to make sure you’re registered and the lady said, ‘You’re not registered to vote, I’m sorry,’ and I said ‘What do you mean, I just registered to vote like a week and a half ago,’ and she said, ‘You’re not in our system, there’s nothing I can do, I can give you a provisional ballot,’” Collamer said. “‘No’ and showed her his voter ID card and said ‘I registered, I’d like to vote please,’ and she said, ‘No you’re not in our system there’s literally nothing I can do,’.”

Previously established rules have also caused controversy of suppressing voters, such as Arizona being a closed primary, which means voters must vote for the party they’re registered for, and independents are not allowed to vote.

“They should allow for same-day registration. I think that in Arizona you have to register with the party a good deal beforehand,” Collamer said. “Why can’t we get voters to come in the day of and just sign them up there. It’d be a lot easier and something that would get voter turnout a lot higher,”

With the current issues, Collamer said, the broken system is why enthusiasm in politics, especially in Arizona, is lacking.

“It kind of makes you think why do I even make the effort to go vote?” Collamer said, “For all the seniors that are able to vote, a lot of us don’t and that’s because you think your vote doesn’t matter but when you try and go they reject you so it only reinforces that.”