OHS is overjoyed with the override outcome 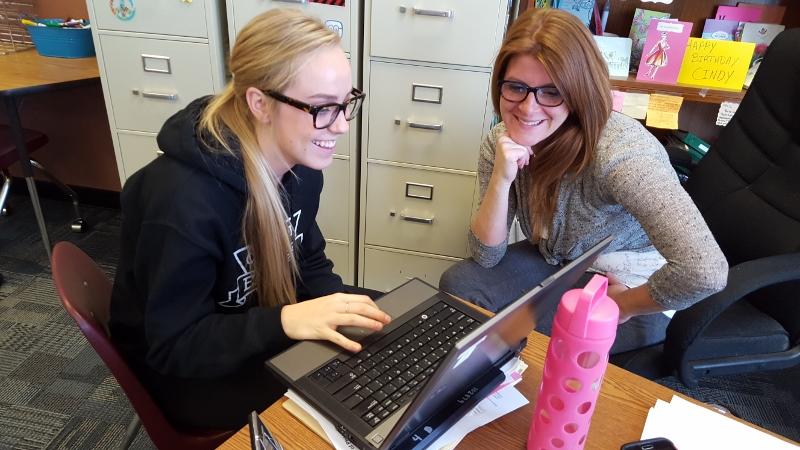 Cindy Garraway assists Destiny Siegrest,sophomore, with her end of the year speech in the dual enrollment communications class. If the override had not been passed this class and others like it would most likely have lost its funding.

Almost all of the OHS staff and faculty members are familiar with the maintenance and operations override that was voted upon in early November. When the results were first announced, it seemed that DVUSD was fated to lose its funding, however after counting the provisional votes, DVUSD was relieved to know the override did pass by a total of 383 votes.
According to the DVUSD website, the maintenance and operations override is voter authorization to exceed to amount of money delegated to an individual school district by the state, the extra money is funded through local taxpayers. The override posed a question to voters, asking if they wished to continue to fund the district at the current rate plus a slight increase.
The vote occurred on Nov. 3, stirring up conversation amongst teachers and students who feared the effects of the possible funding losses.
The day after the election it appeared the override was defeated, however after provisional ballots were counted, the measure passed.
“If it wouldn’t have passed, it would’ve been a 5.4 million dollar deficit this year and the next year it would’ve been another 5.4. It goes down a third each time. So it [the override] was definitely needed,” said Lynn Miller, OHS principal.
The 5.4 million dollars will be maintained with an increase of five percent thanks to the passing of the DVUSD override.
The threat of losing the much needed funding stirred up the emotions of OHS teachers.
“I was shocked,” said Cindy Garraway, OHS language arts teacher and member of the district for 14 years. “I knew we would be close but I did not think the initial result would come back with us being down because it’s very hard to come back when you are down.”
Despite the disbelief among teachers, Miller said he “talked to more people that believed we still had a chance than those that didn’t.”
The override was a much needed piece of legislation to reassure teachers that the community appreciates what they do for their children. The increase in money will be used to fund speciality programs and create an increase in wages for DVUSD teachers.