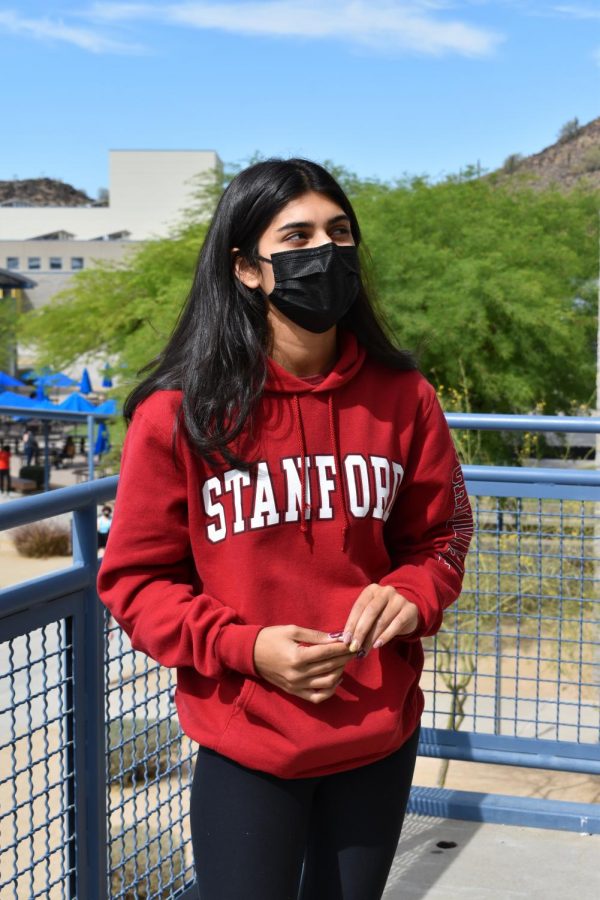 At the beginning of the year, one of OHS’s star students, Ria Saraswat, senior, was nominated for a Presidential Award. It is unclear what exactly prompted this nomination, but Saraswat’s educational achievements were definitely a factor.

On her second go-around for the ACT, Saraswat received an astonishing score of 35. The highest possible score is a 36.

“The first time I took the ACT I did well, I got a 34. So, that was surprising. And the second time, I wanted to increase my score, so I studied for it. Overall, I was hoping for a good score, but I was not really surprised the second time around,” Saraswat said.

For the first test, Saraswat did not study, but because she wanted to increase her score the second time, Saraswat put in a couple hours of studying.

“I feel like I studied a normal amount. I took a practice test a few weeks before the test,” Saraswat said.

The minimal studying that Saraswat employs is a tactic that stems from her personal experiences and performance in school.

“I usually do not do well on tests if I study. I do better if I do not study. For me, excessive studying stresses me out. I feel like when somebody puts too much pressure on themselves to do well, it will backfire on them,” Saraswat said. “You work yourself up so much that you end up doing worse. For me, the less you freak out about it,  the better you will do. That does not mean you do nothing in preparation, just do not stress out to an insane degree over it.”

As far as the nomination goes, Saraswat does not know why she got nominated, but suspects that it is because of her terrific ACT score. Nonetheless, she is very excited about it.

“It was cool to be recognized. I was proud of my score, and the nomination, even if I do not win, it is very exciting,” Saraswat said.

Knowing her test scores, it is no surprise that Saraswat has done an incredible job in school. As a senior, Saraswat is taking several AP classes that include: AP Chemistry, Ap Literature and Composition, AP Computer Science, and AP Government and politics/economics. She attributes much of her success in higher level classes to her former school, Basis.

“I feel like the stress level at Basis is a little high, but in general it gave me a really good foundation for highschool. That is how I have been able to take all of those higher level classes,” Saraswat said. “Being able to go to Basis made sure that I was not behind everybody in all of those classes. The only reason I was able to get through highschool was because of what I learned there.”

It is also because of Basis that Saraswat has had a crazy schedule all throughout high school. She took upper level classes that most seniors and junior take, her freshman and sophomore years. This includes AP Calculus AB and BC. As a result, Saraswat has run out of math classes to take.

“Last year I took AP stats. But, this year I do not have a math class because the district does not have anything left for me to take.  I am a little worried about college because I feel like I will go there and forget everything,” Saraswat said.

In her four years at OHS, Saraswat has enrolled in a number of different invigorating classes.

“My favorite classes at OHS have been my AP physics classes. I took AP Physics one and two freshman and sophomore year, and those, I would say, have been two of my absolute favorites,” Saraswat said.

In addition, Saraswat is a part of OHS’s coveted tennis team. She has played since her freshman year, and has been on the varsity team since her sophomore year.

“I really like the community of girls that we have. To be honest, everyone is super sweet and our coach is pretty awesome (Mr. Harmonson). I feel like the community is the best part about it,” Saraswat said. “All of the girls are really supportive of each other, and we kind of hype each other up and it is really fun. I really just love the sport.”

Saraswat is also involved in Model UN and was Arizona Future Business Leaders of America’s Vice President of Chapter Development.

“I am involved in FBLA at school. The real reason [I joined] was my friends at first, and then I found out that I really loved it. I really got to like it, and all of the people in it. I did well in the conferences with my group the first year. Since then, I’ve been in it,” Saraswat said. “I am also one of the Arizona State Officers for it. We help manage all of the state conferences and whatever events they have. I am finishing my term in the next couple of weeks. I represent the state, I guess.”

It is thanks to FBLA that Saraswat has been able to deduce both what career she wants to pursue and what college she will attend.

“It was always a debate between engineering and business and I think FBLA played a big part in making me interested in finance,” Saraswat said. “I have committed to college at the Wharton School at the University of Pennsylvania to study finance. They gave me the flexibility to take the classes I want and to study finance. So, when I got this opportunity, it was too good to pass up.”

As far as Model UN goes, Saraswat joined so she could learn about something new and have a place where she could converse a lot with other people.

“I am also the president of Model UN at our school. I joined because I like to talk a lot. I am a social person and I am active in a lot of things. So, it was another way for me to talk about world things and issues. Really, it is just that I like to talk,” Saraswat said.

Outside of school, Saraswat spends a lot of her free time engaging in the arts. She plays the guitar, the piano, and the viola. She also enjoys drawing.

“My family is very into the arts. We did a lot of musicals and plays when we were younger. It has kind of become a safe haven. When everything else is crazy and there’s a bajillion things to do, it helps me calm down. I would say that it comes naturally; It is not forced,” Saraswat said. “Art is another creative outlet where I can get my thoughts on paper. Sometimes you cannot put your thoughts and emotions into words, and music and art are ways to release those emotions.”

Saraswat is able to accomplish all of these incredible things and keep up with her busy schedule because she is inspired by what makes her happy and the desire to be better.

“There is nothing specific that motivates me. I think I am internally motivated. I just want myself to be better. I measure success by how happy you are. I do not think money makes people happy, so it does not mark success,” Saraswat said.

Family is a very important part of Saraswat’s life, and her family plays a big role in everything she does.

“My family makes me happy. I feel like my family is closer than most families. Overall, we spend a lot of time together and they have supported me through everything I have done,” Saraswat said. “My parents are my role models. I have learned how important education and work ethic is from my parents. I have learned a lot from them.”

One thing that Saraswat says she has learned from her parents is the incredible value of an education.

“Education is important to get a good job and have a good quality of life. Also, it makes you more knowledgeable about the world, it helps you become better at interacting with people, it makes you more conscious about your surroundings and I think that is really important,” Saraswat said. “On top of that, it also depends on what you want to do in life. The job I want to do requires a lot of education, so I have learned to value it a lot more.”