Vaccines now made accessible to teachers 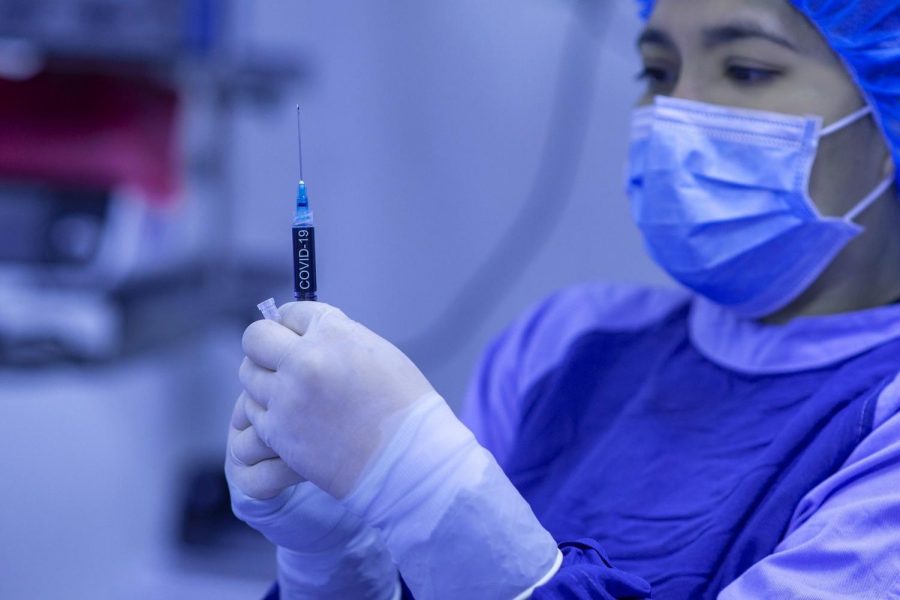 As we’re approaching one year of the COVID-19 pandemic, the new normal of quarantining, wearing masks, and social distancing is now a familiar practice. The next step beyond managing the spread was for scientists to develop a vaccine to combat the virus. And after a few months time, that has now come to fruition.

The first to receive the vaccine were the essential health workers, those working directly with patients who might be exposed to the virus. The next group to receive it were the older and high risk portion of the population, leaving the nation’s teachers and educators as next in line. Alan Baker, economics teacher, is one who has already received the vaccine and gives his opinion about coming back in person with it.

“From what I understand about the vaccine it’s 95 percent plus effective, meaning it’s 95 percent certain I’m not going to catch the virus now. Now this is after the second shot, but the unfortunate part is that we don’t know if we’re carriers then. So we’re still going to have to do the same things we have been doing with distancing and wearing masks and so on but I’ll tell you from a teacher’s standpoint and being in the classroom, I feel a whole lot safer this way,” Baker said.

While there are some teachers who are anxiously waiting for their turn to get the vaccine, others are more apprehensive. Some believe it should be their choice whether or not they decide to get it.

“I think it is a good thing for teachers who are very concerned especially with their health issues but I also think it could make a difference for those who are worried about catching COVID from the students. But in my opinion if a teacher is not concerned, or a teacher feels  like they can go on just as if a flu shot is introduced to them and they don’t get the flu shot, then it’s their choice whether they choose it or not. I think it should be totally left up into a teacher’s choices of whether they want to get it or not, and it’s up to them. But usually teachers who are most concerned about health issues or very concerned about themselves getting it, then I think it’s a great idea,” said Patricia DeVito, english teacher.

With teachers being in close proximities with at least a hundred students a day, it’s no wonder they are now being labeled essential workers. Between the risk of exposure, and inability to teach from home, teachers are at as much risk as those who work in the medical field.

“Teachers are definitely in the front lines. So they are essential workers, they don’t have a choice. They have to be [at school] and if they are exposed to students who either weren’t aware of it or weren’t aware of the time that they had it, they have potential for getting it. So I think they are frontline workers no matter what anyone would think because of how many students are in front of them each day, especially in high school,” DeVito said.

Among other schools, OHS was one of many that started the first three weeks of second semester online. Between then and when students returned back in person, some teachers had already received the first stage of the vaccine. What kind of impact this will have on the school’s environment, only time will tell.

With the vaccine having been produced so quickly, it leaves some wondering if all the kinks have been fully worked out. Because there has never been a need for a COVID vaccine before, the long term effects are completely unknown.

“There’s so many uncertainties with it and if they were sure that yes it is safe I would say okay. But they are giving the shots out and people are saying it’s okay and now we’ve had another case that I’ve heard of this past weekend of someone else who has passed away after getting the shot. So I don’t know if it’s a faulty shot or if it was just the person’s immune system. I have no idea but it leaves you questioning whether the shot is a good thing or not,” DeVito said.

Those who have received the vaccine this early in the stages of its development and distribution are essentially guinea pigs. The scientists and pharmacies working with it are collecting data as more and more sign up to get their shot.

“My wife and I and everybody else that I know who’s been vaccinated down at the stadium, we get a text daily asking how we’re feeling, any side effects, this and that. In part because they are still continuing the clinical trials, we’re like the live clinical trials and they need the data, they need to know what’s happening with this thing, if it’s really working. But that’s where my confidence is, if we follow science i think we’re going to be alright,” Baker said.

Ultimately it’s not the teachers who are going home with COVID-19 diagnoses. While teachers are the ones receiving the vaccine there’s only so much that will be able to do to halt the spread.

The biggest thing students can do is to be aware of what they can do to help keep the virus at bay. Although it has been one long year of keeping a distance from the people they care about and adjusting to the practice of wearing masks anytime they go out, keeping up these habits are the best solution as of now.

“I think the big thing is it’s going to come down to you guys and what you do with family members and other people you hang around with. Because all the numbers that I’ve seen, I shouldn’t say all of them but the majority of them, it comes down to being in large groups, not wearing face masks, not being distanced, and those kinds of things and you guys don’t feel the symptoms nearly like somebody my age,” Baker said. “And again we’re talking in generalities, you guys tend to be more immune to the symptoms and don’t know that you’re carrying it and all of a sudden 10 people are exposed and they got it and that’s where we get the huge spread. So it’s going to be more on you guys to mitigate this thing than it is for us.”