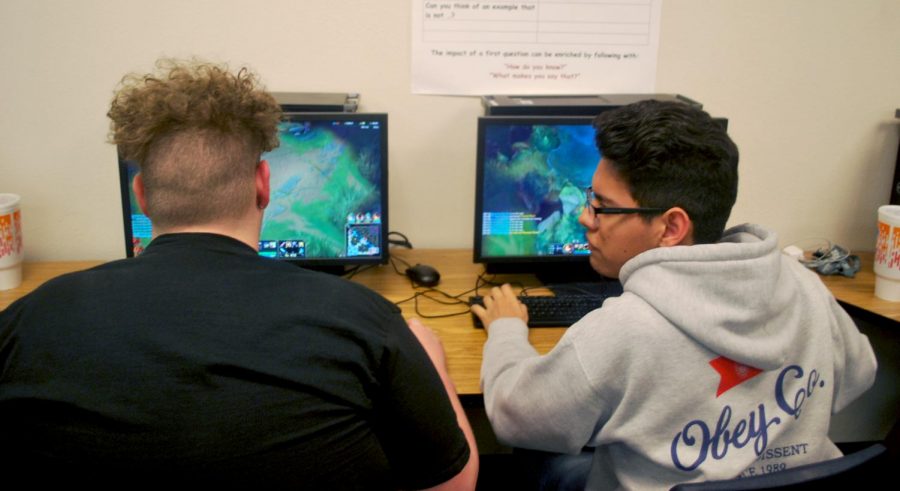 After over a year of waiting for approval from administration, the ESports club is finally allowed to play matches against other schools across the state. Currently, the only game they’re playing is League of Legends, with hopes of more games being included in the future. Their matches are every Tuesday at 4 p.m., and they always practice for an hour and a half beforehand, coming up with new strategies and figuring out their roles.

The team has played three matches so far, winning two and losing the other. They’ve played against Apollo High School, Dobson High School, and Carl Hayden High School, beating both Dobson and Carl Hayden 2-0, and losing to Apollo 0-2. The ESports club is run by Josh Hafer, algebra 3-4 teacher, and the League of Legends team is coached by both Hafer and Tom DeVito, the wrestling coach, who only comes in to help them during their matches.

“We talked to coach and another one of our friends who’s played for a long time and they told us how to counter a strat that’s been around for a long time. I don’t think we were ready week one, but we’re definitely ready now,” said Eric Barron, junior.

When first hearing about being approved for matches against other schools, the team was  excited to get a chance to play for OHS. Ethan Hemstreet, junior, had mixed feelings on the matter, however.

“I was kind of nervous, because everyone here has been playing way before I have, and I only started about a month before I joined the team, so I was still learning the basics of how to play League. But I was also excited because I’m able to play with my friends and play for the school which is pretty cool,” Hemstreet said.

So far, the club only has a varsity team, but the club also wants there to be a JV team if the club does expand. Evan Pauling, junior, adds more to this detail, and also talks about what might help the club grow.

“A future plan I’d want for the club is for it to expand, gain more players and eventually work our way towards a JV team for league play. I’d also want other games to be added for matches, such as Rainbow Six Siege, so that we can branch out more,” Pauling said.

With the approval of matches, this opens up many pathways for the team, in terms of scholarships and being able to play a sport for OHS. Since their loss against Apollo, they’ve been unbeatable, sweeping each team with relative ease. And because the team is so close to each other, they often practice outside of school, which contributes to their success in these matches.

“If something isn’t working, we’ll just keep playing and practicing outside of school until we figure something out. What I’d like to see for the club is more computers and a JV team, so that we can practice against the JV team before matches,” Barron said.