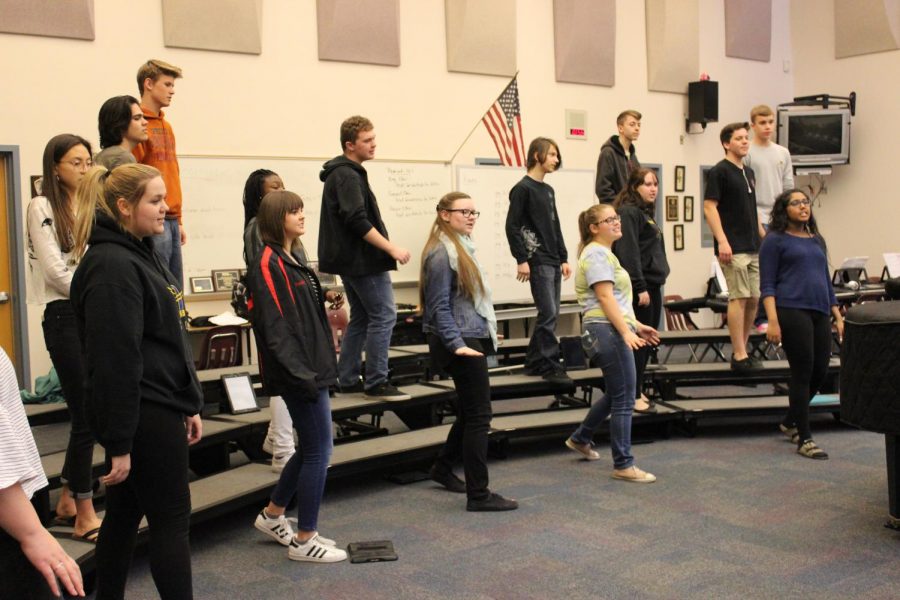 Honor choir practices on March 7 in class, singing “Shut De Do” ahead of the festival

Choir is starting second semester on a high note, as they will be taking a trip to San Francisco on March 17. The trip will be to attend a CODA Concert Festival, where they will have the opportunity to sing in Grace Cathedral, one of the most premiere theatres in the United States.

The choir students attending the event, about half from concert choir and half from honor choir, will have the opportunity to work with two notable clinicians: Dr. Jerry Blackson from the University of Michigan and composer Z. Randall Stroope.

Stroope has composed the arrangement that will be performed at the Cathedral, entitled “Into the Fire,” by choir along with several other choir students from around the country. Stroope will also be there to direct the choirs as they sing. OHS will be able to perform themselves, as well as in mass numbers with the other choirs.

“It’s great to be able to work directly with the composer,” said Cindy Durazo, choir director.

Two years ago choir students were able to travel to New York and perform in Carnegie Hall. Last year, however, was more of a competitive year for students.

“Last year was about competing for ranking,” Durazo said.“This year we can perform in a theatre with music and have the musical experience and we can sing with other students across the country with same interests as our students.”

The choir will be the first to perform the arrangement composed by Stroope, and will be recorded at the event for future use of choirs across the country.

“It’s exciting to be the first choir to sing and perform that song,” said Autumn Webb, junior and member of Advanced Performance Choir (honor choir).

The opportunity to perform helps the overall growth of the choir, giving them one more thing to put in their personal repertoire.

“[Honor choir] is a pretty young choir this year,” Webb said. “There’s only a few seniors and the juniors want to see the choir grow so we can practice songs with more ease and be more successful.”

Students participating in the field trip will have fun as well, as the choir will tour the sites of San Francisco including a guided tour, Alcatraz, the Aquarium of the Bay, and other fun attractions.
For those who wish to hear choir sing these arrangements and cannot watch in San Francisco, choir will also perform the combined numbers in their May 11 concert for family and friends and all those who wish to attend.