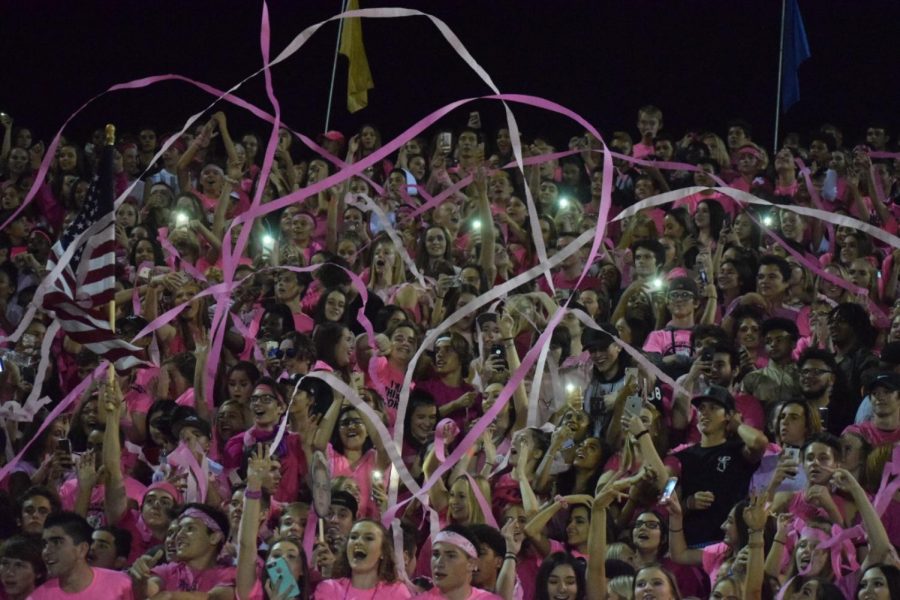 Students wore pink to show their support for the winning team.

The Ridge game, the most anticipated game of the year, was on Friday, October 27th. The tradition of Ridge being a pink out continued this year as the student section lit up with bright pink shirts and banners made by Stugo.

Baylor Gibbs, senior and Stugo president, was in the nest and hyping up the crowd.

“I feel like we had a lot of energy going into it,” Gibbs said.

The Ridge game is also the last game of the football season, so students rushed for their last chance to show major school spirit.

“It was the senior class’ last football game so I think we were more energetic,” Gibbs said, “We even had a tailgate before [the game].”

Upperclassmen weren’t the only ones in the student section. Many underclassmen came and enjoyed their first home Ridge game.

“People were chanting and screaming and it was a really good atmosphere,” said Aimee Rego, sophomore.

The football team felt the positive effects having the exciting game at home brought to the night.

Ethan Moller, junior, is the quarterback of the varsity team this year and brought in lots of points for the team at the rivalry game.

“When it’s away you feel kind of alone. If you do something good no one’s really there to see it,” Moller said. “When it’s a home game you feel like everybody’s got your back and are there supporting you.”

This constant energy and excitement from our student section helped fuel the football team throughout the intense game.

“The team felt more together and we played a lot better as a team and the fans were a lot louder and more supportive,” Moller said.