FROM LEFT TO RIGHT Brandon Smith, Katherine Hubbard, Ashley Kempton, Jake Callaway, and Nathan Crowell gather with other students in a human knot.

Camp One creates a family among students 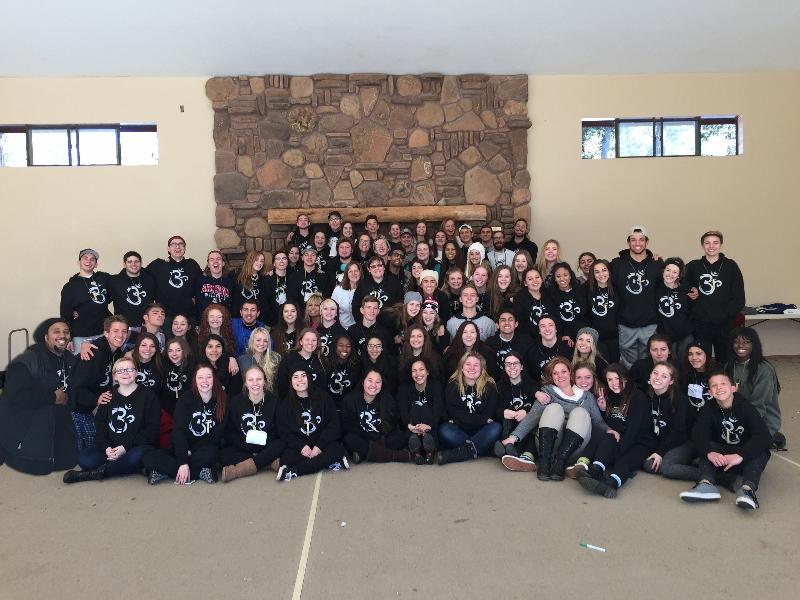 Gallery|20 Photos
Jennifer Galbreath
Every attendee of Camp One gathers in this group shot.

A trip to the woods for three days with strangers quickly turns into an eye opening experience with loving people you’ll learn to call family at Camp One.

Camp One took place Jan. 21-24 at Whispering Pines Camp in Prescott. Camp One is a program, run by Jennifer Galbreath, language arts teacher, and Calvin Terrell, which educates students on social issues in this world regarding racism, gender bias, prejudice, discrimination and more.

In reality, Camp One does so much more for the students who attend it.

Camp One isn’t quite as simple as that though. It is so many things: wonderful, intense, powerful, changing and amazing. It’s hard to describe Camp One in one word. These are a few of the words delegates attached to it.

“It was incredible,” said Brandon Smith, senior. “It’s really hard to put into words. It was relieving, it was eye opening, it made me feel things I didn’t know I could feel.”

Camp One is a spiritual successor to Empowertown, a junior high camp which ran for four years at Stetson Hills. Camp One will enter its third year at OHS next trip. Galbreath’s plan is to create a school dedicated to the ideals that make up Camp One.

There are around 100 attendees at Camp One. This includes 60-70 delegates who are high school students, 10-15 counselors who are college students typically Camp Graduates or sometimes recommendations by students, 10-15 advisors/staff members who are all adults, and the two Camp directors.

The experience is based on skits and activities which are done from the second the drive to Whispering Pines ends.

“(We’re) on the bus and there’s this African-American guy and he was going off about a Muslim girl because he thought she had a bomb but she was just sitting there,” said Chris Aguilar, junior. “He pulls a gun out on her and he’s like ‘you Muslims get outta here’ and he starts cussing at her and the lights go off and you just hear a fake gunshot. He killed her.”

Its design may focus on the larger issues in the world but the experience is also about more than that. It’s also about being able to open up in a safe environment.

“Some people have been through a lot in their life and they don’t talk about it,” said Reece Andonov, senior. “You go to this camp and you’re able to let go and just tell these people everything that you’ve been through and nobody judges you. They just accept you.”

Of course, Camp One is not all tears and strong emotions. It’s a lot of laughing and having fun as well. Whether that was music, energizers which involve acting crazy to wake up, dancing or just hanging out.

“We’d go down to the lobby and everybody would just hang out. We would go on the drums, somebody’d be on the piano, singing, somebody would be playing pool, air hockey, or ping pong, other people would be snowball fighting. It was just a lot of fun and (there was) sledding,” Aguilar said.

Everyone will take something different away from Camp One based on who they are. Regardless every person at Camp One walks away with a different perspective on life.

“Your perspectives change you experience a lot of different emotions and you get to hear what a lot of other people are going through,” said Patrick McMorrow, sophomore. “I’ve come to realize that everyone has their own issues that they’re dealing with and that not everything is about me.”

Some delegates came to terms with mistakes they’ve made or notice the ones others make.

“I feel like I’ve been blinded and now that I’m back I have all these things that I’ve never really noticed before,” said Ashley Kempton, freshmen. “When you see these racial slurs like if someone calls someone the n word you don’t really know the hurtful meaning behind it but when you go to Camp One you know what those meanings are. Every time I hear someone say a racial slur I like flinch because that word is just terrifying.”

Each delegate has their own take on what to think going into Camp One. Everyone agrees it’s not an easy thing to prepare yourself for.

“It’s scary going in, definitely I’m not going to lie about that, but it’s an incredible experience that will create a lot of bonds,” Andonov said. “You’ll have that safe place, that safe group of people and that family bond with everybody there.”

It’s also hard to tell what you’re going to get from Camp One.

“People can tell you stories but you’re not going to get the full effect until you go there and you feel it from deep down in your heart,” Aguilar said. “People come back and say I’m just the same person, but it’s not to change you it’s to see what is going on. That’s what Calvin preaches he says I’m not here to change you, I’m here to open your eyes and make you realize what’s out in the world.”

That unique effect Camp One has on students varies depending on who you are.

“If we took them to the woods for three days and they changed, that’s a cult and I don’t run a cult,” Galbreath said. “Someone who would call it life-changing might be someone who was maybe living in a bubble and didn’t know a lot about the world around them. Some people go to Camp and they learn and go oh I never thought of it that way. Some people do that but also take it a step further and say I don’t want to be that person.”

The return from Camp is a difficult one. The delegates who choose to stand up for the things they’ve been exposed to may meet negativity. This of course frustrates the people at Camp. Galbreath attributes this to ignorance.

“In class someone might make fun of another kid and I might call them out on it,”  Smith said. “Then some other kid will be like oh you just went to camp that’s why you’re being like this or when I tell people I love them they’re like you weirdo you just went to Camp One.”

The Camp One experience is like no other. This group of kids didn’t know each other, but they left Camp as brothers and sisters. They became a family as they learned of social injustice, spoke from the heart and loved one another.

“This girl I know she has a hard family,” Aguilar said. “She said to get away for a while was great, but then to talk about her family while she was there, to face reality, to face other people, to tell her stories and share what she’s going through. Then we all became a family with her. At the end of it she started crying. She couldn’t get on the bus because she knew. We were her real family.”