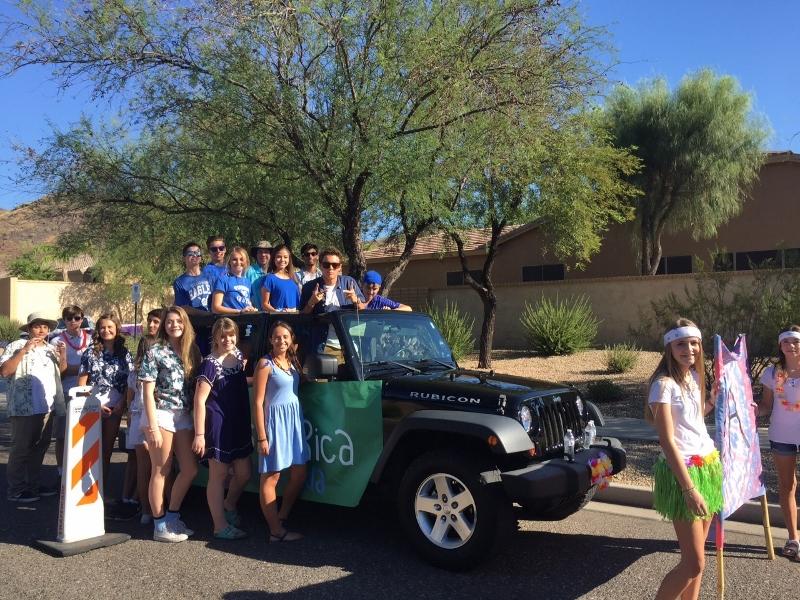 The FMPA club sits waiting on their float for the Homecoming Parade to begin September 25.

For the longest time students interested in medical professions have had very limited options at OHS, with few clubs or classes in the field. For years these students have been losing hope that their needs will be catered too, but this year that’s about to change.

FMPA, or Future Medical Professionals of America, is a new club for students with medical interests that also encourages students to live a healthy lifestyle.

Owais Salahudeen, junior, has hopes of being a medical professional in the future. He says it feels great to give back to the community and save lives.

“I want to become a surgeon,” says Salahudeen. “being a doctor is a very good way of giving back to a community, it feels nice to help people and it’s a fun job. It feels cool to say ‘oh you know, I help improve people’s lives'”.

Salahudeen says he got the idea for the club when he was sitting with his friends at lunch in sophomore year, when they realized OHS doesn’t have a medical club, and finally, he got the club approved this year.

Salahudeen says FMPA strives to show the sides of the medical field you don’t hear about often, and also promotes healthy living.

“The purpose of this club is to expose kids to the medical field, cause what they see as the medical field isn’t how it really is, like doctors don’t really work at the hospital the entire time they have their own practices and stuff,” says Salahudeen “Also promoting healthy living, because if you want to be a medical professional you should be living like a healthy person.”

Colton Flowers, senior, is an officer of FMPA who says it provides much needed connection to the medical field.

“I just like the fact that it connects me with medical professionals and gives me a more in depth understanding of each field and maybe the possibilities that I have of going into the medical field,” says Flowers.

Salahudeen elaborates more by emphasizing the extra knowledge of this club that you won’t get anywhere else.

“One of our biggest things that we offer is that we’re gonna have guest speakers who come in once a month and they’re gonna be from all different types of fields,” says Salahudeen “They could be physicians, ICU nurses, surgeons, health administrators just so everybody knows that the medical field isn’t just doctors there’s so much more to it there’s a business side, there’s an engineering side to it, like when you have to build M.R.I scans.”

Not interested in a medical profession and still want to be involved? Don’t worry, because Salahudeen says having knowledge in the medical field is a great head-start for any future career you might have.

“A big thing is that health in America is the largest economy so people who want to be businessmen, or lawyers or engineers they all will maybe have to do stuff with the medical field,” says Salahudeen “To run a health building you’re gonna have to have business for that, lawyers deal with malpractice and other doctor cases, and engineers because they’re almost the future of medicine because they have all the robot surgeons, the da Vinci system (robotic surgery), that’s a really big thing engineers are doing now,”

Flowers also adds by saying FMPA will prepare students for the future where they’ll need knowledge about medical practice.

“We learn a lot about the human body, and how the medical field works,” says Flowers. “it’s inevitable that you’re going to somehow be involved with the medicine industry whether it’s through medicine or going to see your doctor, or dealing with healthcare insurance.”

With unique ideas and big plans for the future, FMPA is a club that every student can find interest in, all you have to do is check it out and give your full attention.

“What you put into it is what you’re gonna get out of it, if you come into a meeting and just listen to what the guest speakers have to say, and the cool activities we have to do, we’re planning on showing people how to eat healthy, and meditation exercises, (and) how to live a healthy life which is a really big thing, so if you could just go in there and show the effort you’re going to get a lot out of the club.”