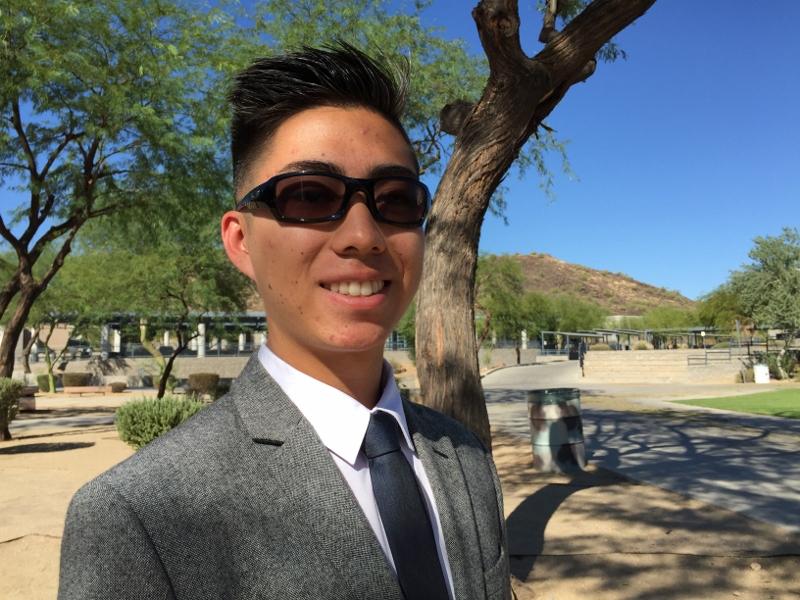 Buttoning up, tying your tie, lacing your shoes tight and keeping your shirt tucked in. This might sound like an occasional wedding or dance, but for Kainoa Spencer, it’s just another trip to school.

Kainoa Spencer, junior, dresses formally almost every day of school because he chooses to, not because he has to.

Q1: Tell me about yourself, who are you?

A1: I’m a very kind and outgoing man, and I can be very friendly at times but I can also be very timid and rash if I need to be but that’s only under certain circumstances. I suppose I can be very temperamental but that’s a really rare occasion for myself and overall just getting to know me would be easy as long as you just open up and just express yourselves

Q2: What activities/clubs at OHS are you a part of?

A2: I’m not really a part of any clubs but I suppose AFJROTC would be because we do do outside activities but it’s more along the lines of community service.

Q3: Almost everyday you’re dressed nice; why do you do this?

A3: I don’t know it kind of just snapped to me because my mother owned a boutique, and then my brother eventually followed along and started dressing up as well and so I followed in my mother and my brother’s footsteps and I kind of took into it so yeah it’s an inheritance.

Q4: Is dressing formal every day at all difficult for you?

Q5: Would you encourage more people to start dressing a little nicer maybe?

Spencer’s clearly dedicated to formality, and if you see him walking down the hall dressed formally, remember it’s all his doing.