Trolls World Tour; cute and fun, but not much else 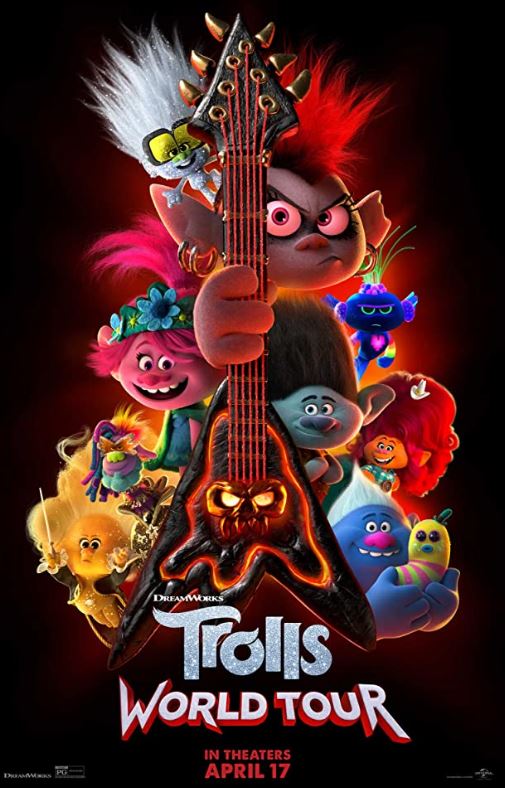 Three trolls stand at each other’s sides, huddled together discussing their big plan to save the troll kingdoms. In the middle is Poppy, voiced by Anna Kendrick, Queen of her kingdom of pop-music trolls. To her left is Biggie, voiced by James Corden, a large blue troll that holds his pet worm. To her right is the unrealized love of Poppy’s life: Branch, voiced by Justin Timberlake.

These three vastly different trolls stand in the center of unknown Country Troll territory. Tasked with uniting all different types of musical trolls, these three decide to cheer up the bunch of country-music trolls that surround them by singing an array of pop songs met with choreographed dance moves and colorful costume changes. Their attempt to form a friendship with the uptight, sad, and sassy Country trolls fails when they are thrown into the county jail by mayor of the Country Trolls, Delta Dawn, who claims that their performance was a “crime against music.”

This crazy, but incredible scene is just one minute of the hour and a half 2020 DreamWorks movie, “Trolls World Tour”, a sequel to the successful 2016 movie, “Trolls”. In the sequel, Poppy learns that there is an entire world of trolls that sing different music, outside of her kingdom. When she gets word that Barb, voiced by Rachel Bloom, Queen of the Hard Rock Trolls, plans to destroy all other genres of music, Poppy sets out to help the other trolls to stop her.

Poppy’s journey is fully animated and her friends are voiced by a multitude of acclaimed actors and musical artists, some of which include Kelly Clarkson, Kenan Thompson, and Ron Fuches.

Underneath the enormous piles of glitter, kid-related humor, songs, and bright colors, “Trolls World Tour” is filled with valuable lessons for both the adults and children watching. Throughout her journey to save all of the troll kingdoms, Poppy is introduced to numerous genres of music, all of which she learns to love. After being confronted with a lot of push-back and tribulations, Poppy learns that life is not always super fun. Nevertheless, she pushes forward and doesn’t let life get her down. If you are able to get past the constant glitter explosions and song outbreaks, you can learn a lot from this movie.

Although filled with important lessons, the concepts featured in the movie may be too difficult for children to grasp. In the movie, Poppy learns that the history she was taught was a lie, and is forced to confront the upsetting truth. This is a great moment for children to learn about forgiveness, overcoming the past, and making things right. Sadly, this moment is immediately glossed over with a song and dance routine. With so much going on all at once, it is easy for the message to be lost, while wonderful, catchy songs, goofy jokes, colorful characters, and random pop-ups, distract from the more important messages.

The one message that is able to poke through the distractions is the idea of accepting differences and uniting together. While this message is unclear throughout the majority of the movie, and like the various other learning moments, gets lost in the glitter, it does seem to make its way to the forefront of the movie near the end. This helps tie everything together and give the movie a decent ending. Unfortunately, this is the only message that kids can clearly take away from the movie. As it is a message taught in numerous other kids’ movies, this doesn’t help set “Trolls World Tour” apart from any other movie. Despite the shiny animation, the storyline does not stand out.

While it is clear that an attempt to make this movie more than cute for kids was made, the attempt was futile. Overall, there is nothing horribly wrong with the movie. It is a fun, cute, glitter-filled spectacle, complete with catchy songs and nonsensical jokes, but doesn’t accomplish much else beyond the surface.