Theatre bops to the top with high school musical 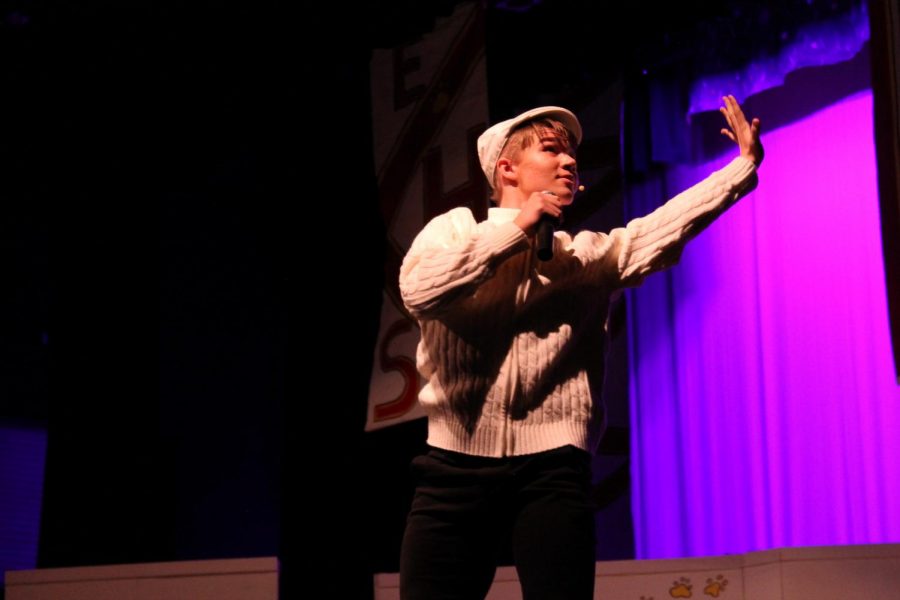 The character, Ryan, sings to the audience.

There are several movies that have been iconic for this generation and High School Musical is one of the biggest. Most of the students on campus grew up singing along to Troy and Gabriella, and that enthusiasm has not lessened, in the slightest.

With the Disney Channel Original movie being a vital part of their own childhood, the theatre program set out to bring the musical production of such a beloved story to the students of OHS. Jonathon Bacon, junior, plays the infamous Troy Bolton and is excited for the cast’s original take on such a classic show.

For this generation, “High School Musical” is a childhood staple and the OHS theatre shows a promising interpretation of it. Elise Sheppard, junior, plays Taylor and likes the behind-the-scenes differences of this show.

“This show is a show that is near to my heart; I grew up watching High School Musical, so having the chance to be in it is really fun, and it’s a bigger cast than previous shows have been so its fun working with new people and making a new group of friends,” Sheppard said.

One of the reasons why the show was so important to such a large audience was its relatable appeal, something that reigns true with Bacon. His take on Bolton is a very personal one since Bacon embodies him on a daily basis, participating in both the arts and sports.

“Troy means the absolute world to me cause its been my dream role since age 2,“ said Bacon. “I play basketball and I’m the VP of the choir program and for the longest time, I didn’t do drama or theatre because I didn’t feel like that was the status quo for an athlete to do, but finally I decided to step out of the box, now I’m an athlete, actor, singer and dancer.”

In the past, the theatre program has put on productions that have been Broadway classics, but they decided to switch to a more modern approach this year. Harrison Staley, junior, plays Zeke Baylor and is looking forward to bringing this show to life.

“Usually in the past we’ve done a lot more shows known to the adult demographic, but this year doing High School Musical, we really wanted to do it because it is one of the last generations to really know High School Musical and really enjoy doing it, and enjoy showing it to other people,” Staley said.

Every show takes a great deal of hard work to succeed, especially High School Musical. With more scenes than previous productions comes the need for more materials to support the story, which is something that the student body can help with.

“We do have tech here so you guys can come in and help paint the backdrop and build the set; stage production does a lot of that, but we still need extra help to pull that off and it is great for community service,” Staley said.

High School Musical is a very well-known movie with a multitude of iconic songs that almost every student on campus knows by heart. This does not make the cast’s jobs necessarily easy. There comes the stress to do right by the story and its characters that are very near and dear to a great deal of people.

“There’s a lot of pressure, me as Zeke Baylor, ‘Creme Brulee Boy,’ I needed to watch that scene over and over just to get his essence; this sounds so advanced but it’s true. He’s such a torn character because he’s so in depth, but he’s one of those characters you didn’t notice until he popped up out of nowhere. He’s become a fan favorite, so trying to portray him, it comes with a bit of pressure but it’s good for me,”  Staley said.

On the other side, however, the cast is extremely excited to see how the audience will respond to the show and their interpretation of these beloved characters, along with a couple secrets they have hidden until curtain call.

“We got a teacher as Coach Bolton; it’s a surprise, and it’s really funny that he comes in and he’s just doing it and learning this with us. I’m really excited to see the reactions of everyone when we come on stage, and do ‘Get Your Head in the Game.’ I can’t wait to see that,” Staley said.

High School Musical is a show that needs every underlying component to come together and so everyone is contributing in their own way, to make the show the best it can possibly be, especially Bacon.

“I just try to come to rehearsal everyday with a smile on my face and a good attitude,” Bacon said. ”At home I’m always running through the dance numbers [and] I have my sister run my lines with me. I came to day 2 of reheasal 100% memorized, so my lines are already down packed. I just try to lift everyone up when I see them down.”