Practically perfect in every way? A look at the new Mary Poppins movie 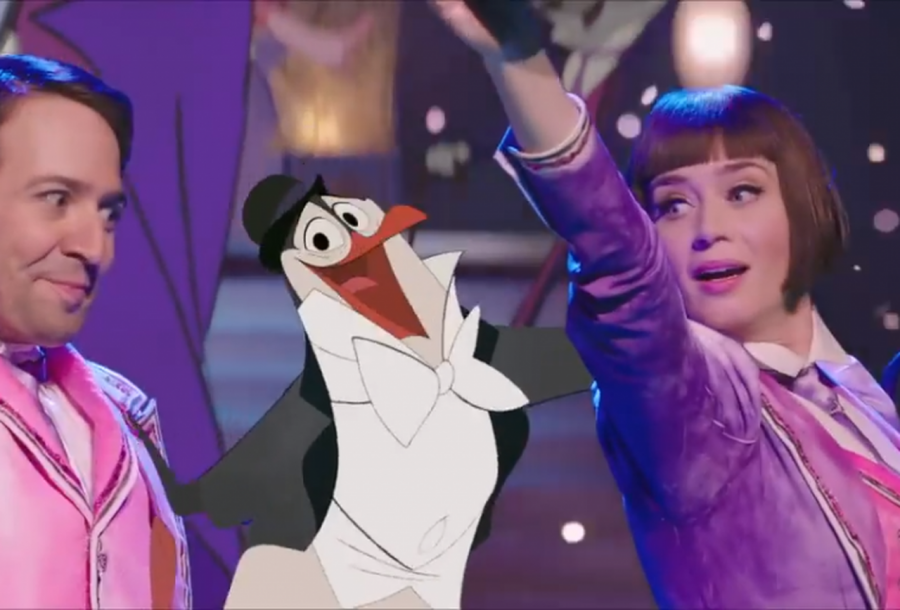 An image from the song "A Cover is Not the Book" from Disney's "Mary Poppins Returns."

55 years ago, Julie Andrews and Dick Van Dyke made movie history with the movie “Mary Poppins”, directed by Robert Stevenson and produced by Walt Disney. This instant classic featured heartfelt tunes that have gotten stuck in many heads over the decades, like “A Spoonful of Sugar helps the Medicine go Down,” “Supercalifragilisticexpialidocious” and “Let’s Go Fly a Kite.” On Dec 19, 2018, the long awaited sequel, “Mary Poppins Returns” hit the theaters, quickly becoming a box office success, gaining approval from audiences and critics alike.

“Mary Poppins Returns” centers around the children of Michael Banks, one of the two children from the original movie, in the mid 1930s. Their mother, Michael’s wife, has passed in the recent year, and the Banks children are yet again in need of the magical nanny, Mary Poppins. The Banks family is about to lose their house, and with the help of Mary Poppins, they learn how to be a functional family again and the children rediscover the magic of imagination.

“Mary Poppins Returns” has a star-studded cast, including the likes of Emily Blunt as the fantastical leading lady, along with Broadway star Lin Manuel-Miranda as the quirky lamp lighter. The children are played by Pixie Davies, Nathanael Saleh, and Joel Dawson as Annabel, John, and Georgie Banks, respectively. Emily Mortimer and Ben Whishaw play the beloved Jane and Michael Banks, both grown up at this point. Other notable cast members include Colin Firth, Julie Walters, Angela Lansbury, Meryl Streep, and Dick Van Dyke.

The score and music for this film was written by Marc Shaiman, and lyrics by Shaiman and Scott Whitman. The movie is full of brand new songs that harken back to similar themes from the original movie. “A Cover is Not the Book” is a playful number taking place in an animated setting, much like “Supercalifragilisticexpialidocious,” and “Trip a Little Light Fantastic” takes the place of “Step in Time” as the eccentric dance number in the movie, full of acrobatics, lamp posts, and even BMX bike tricks. The soft ballad is “The Place where Lost Things Go,” where Mary speaks to the children about the loss of their mother. The movie is filled with various musical numbers to help bring this colorful, magical movie to life.

A major plot point in this movie is the loss of Annabel, John, and Georgie’s mother. It is referenced many times by Michael that she was the one who kept everything together, and since her untimely passing, everything has gone wrong for the family, including losing the family house to the bank. A unique thing about this movie is its look at how this tragedy has affected the family, as well as their attempts to deal with life without the mother. The audience sees Michael trying, and failing, to handle everything on his own, while his three young children act years older in order to help out the family. The original movie never went into anything deeper than the struggles of two young children, so to see the effects on both Michael and the children adds complexity to the story and allows the movie to take on a more important meaning of holding onto childhood wonder.

This movie gets most of its popularity based on people’s love for the original movie, and the directors and writers were definitely banking on that nostalgia to gain attention. The entire movie feels eerily familiar in plot, style, and even song, undeniably taking many cues from its predecessor. The plot is very structured and predictable, and the links to the original movie are undeniable. The styling of each song seems to take on a role of some other song from the original movie, like the ‘clean-up song’ and the ‘animated dance song.’ The very obvious connections makes this movie feel like a bit of a rip off, like it’s the same Mary Poppins movie repackaged and wrapped up with a new, shiny, colorful bow.

Although “Mary Poppins Returns” is full of charisma, color, and marvelous fun, it still doesn’t compare to the original 1964 film. It tries to replicate the adventures and quirks of the Julie Andrews movie, but doesn’t quite make the same impact. It is undeniable that Emily Blunt was stupendous as Poppins, and Manuel-Miranda was a joy to watch on screen, but their incredible performances doesn’t save the movie from feeling like a reproduction of a brilliant film.

Despite the obvious copying from the original movie, and the fact that it might not ever be as impactful as the Disney classic, “Mary Poppins Returns” is still an amazing movie filled with fun characters and songs that will have even the toughest of critics tapping their toes. The movie might not be ‘practically perfect in every way,’ but it is definitely still an entertaining spectacle sure to make you smile.