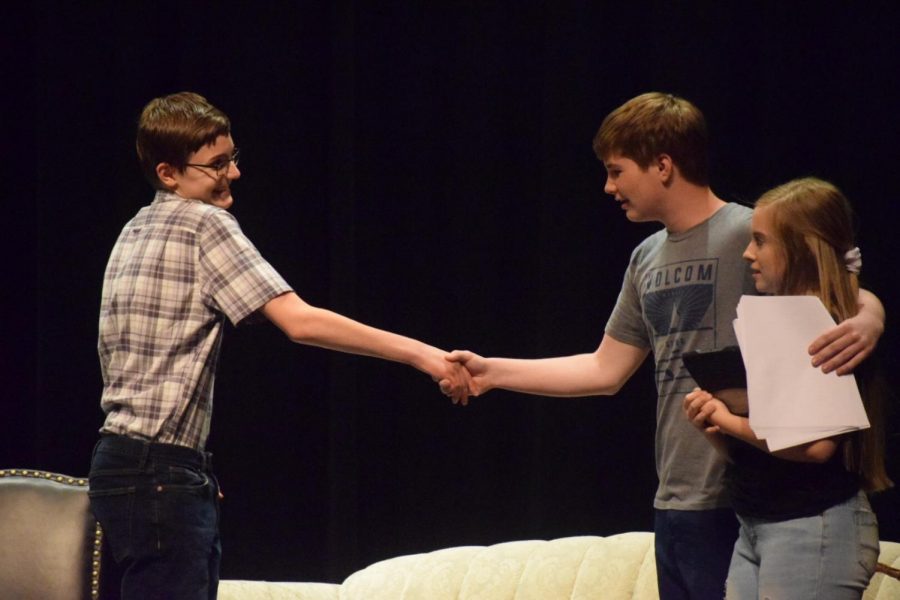 The cast of "Pudding" performs at the playwright competition. “Pudding” was written by Maddie Sperry and Natalie Matyskiel, juniors, and won first place.

The theater department put on their annual playwright competition on Thursday March 22 in the main auditorium.

Here students in advanced theater wrote original plays and had intermediate students perform in them. Three plays were shown and competed for 1st, 2nd, and 3rd place.

Starting as a project assigned at the beginning of the semester, Advanced theater students started with the idea for a story.

“We were together one day and were trying to just brainstorm and then kind of out of nowhere I was thinking wouldn’t it be cool to have a story set in Berlin at the time when the Berlin Wall was being built because you hear about people being seperated from the East and the West and all the tensions within that,” Shawe said.

Time management in writing the script was a huge tool the playwrights had to incorporate for success.

“For us it wasn’t that stressful because I think we did pretty well time-managing it so as soon as we came up with the story we came up with plot structure and from there we would just right half a page to a page per day up until it was actually due,” Birkenfeld said.

Amy Hutton, junior, performed in “Iron Hearts” as Adalade, and described the process as a mix of fun and some stress.

“It was a mix of both, we all got along very well together so it was really fun being able to put all of our input into it,” Hutton said “It was stressful because we all want it to go really well for the playwrights.”

As a whole, Hutton said it was a fun experience of socializing with new and different faces.

“It was really fun to meet a lot of new people, I didn’t have that many friends before in theatre, so getting this opportunity to meet the playwrights and the people in it was really cool and fun experience to learn how to deal with different people,” Hutton said.

Shawe says writing a whole play was ground she had never broken until the competition, and felt rewarded by the opportunity.

“I haven’t really written an entire story before, I might have ideas but I never have had to go through with it  so having this as an assignment and actually doing it was just very fun and rewarding,” Shawe said.

“I was very proud of us because we all tried our best and all did what we thought was good for this play,” Hutton said.