Review: The Cloverfield Paradox finds itself lost in the void of mediocrity 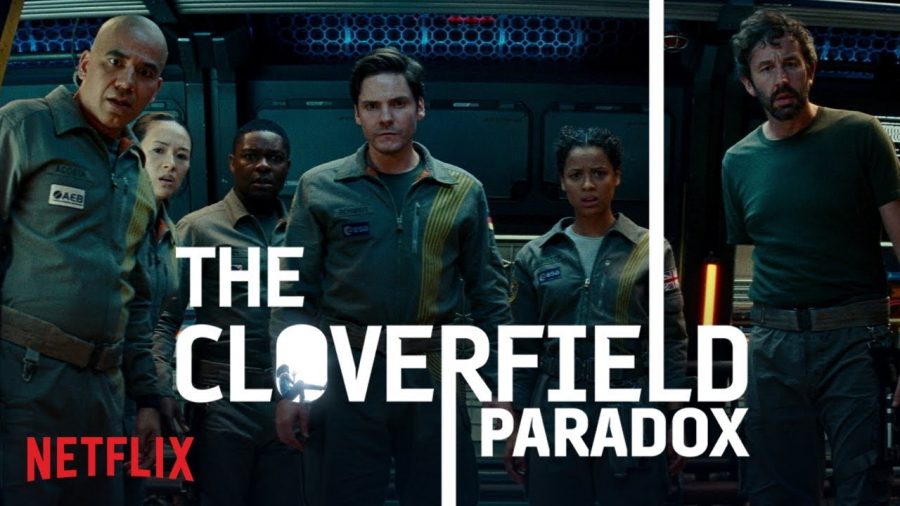 The original Cloverfield was a fun and innovative monster movie with a groundbreaking marketing campaign, and 10 Cloverfield Lane was an amazing and tightly crafted psychological thriller with a shocking sci-fi twist at the end. The Cloverfield Paradox should’ve been amazing, but the only paradox we’re left with is how two great and innovative films were followed with such a forgettable one.

Originally titled “The God Particle”, “The Cloverfield Paradox” follows the story of a group of scientists aboard the Cloverfield spaceship, testing the Shepard particle accelerator, which could provide unlimited renewable energy to a crisis stricken Earth. The protagonist Hamilton, played by Gugu Mbatha-Raw, struggles with grieving over her deceased children, and eventually mishaps with the particle accelerator sending the mission spiraling downward.

This malfunction has ramifications that affect the crew, the people back on Earth, and even other dimensions which collide with this one. The potential for a great science fiction story is there with the very idea of this movie, but the movie merely scratches it’s razor-thin surface.

There is plenty of intrigue set up in the first half of this movie, and for a while you’re kept wondering “what’s going on?”. Crew members will make discoveries that blow your mind and get you thinking for a while, but sadly the second half of the film has no payoff for any of this intrigue.

Strange, physics-defying events will happen and characters will die, but by the end of the film there are no twists or reveals that cause any of these to make the slightest amount of sense. The movie basically expects you to just buy into everything because it’s a sci-fi film involving the collapsing of dimensions.

This type of ambiguity can definitely work if executed right, however when a character’s arm is painlessly removed from a hole in the wall and the severed arm emerges out of nowhere and proceeds to write out instructions for the characters to follow, then that’s not ambiguity. That’s called having a cool idea for a weird scene and not having an explanation for how it will fit into the plot of the film planned.

The whole film has no real flow or development, it just feels like a bunch of strange and different ideas for space horror cobbled together, with a cliched villain twist thrown into the final 20 minutes. The tie-ins to the first Cloverfield felt completely forced into what was supposed to be a contained sci-fi thriller.

These tie-ins involve cutting back to Earth to Hamilton’s husband, played by Roger Davies, where he too is experiencing the ramifications of the accelerator’s faults. Showing everything Hamilton’s husband is doing not only broke the feeling of isolation and separation we’re supposed to feel with her, but it just feels like a different film altogether. It’s left painfully obvious that this film was not originally a Cloverfield story, but instead twisted into that in post-production.

The film is not without its merits, the most of which is it’s fantastic and diverse cast of both new and established actors who all give 100%. Mbatha-Raw does a great job of humanizing the story, and it is refreshing to see a sci-fi film carried by a woman of color. She deserves a huge career in Hollywood and will hopefully get many great opportunities to shine after this.

The film’s release as a whole was groundbreaking for the world of cinema, because how often do you hear about a preview for a film airing nationally for the first time and it being available for everybody to watch the day of on Netflix? This was a bold strategy and paid off in the sense that everybody was talking about it and many people watched it right after the Superbowl. Just imagine how groundbreaking it would’ve been if the first film released in this style was fantastic and had everybody talking about it in a good way.

“The Cloverfield Paradox” is not a horrible ordeal, nor is it the groundbreaking film it should’ve been, instead it’s simply a forgettable sci-fi flick that probably would be better suited for a straight-to-dvd release. The cast and some of its ideas in the first half shine as its bright spots, however it’s lack of flow and logic leave it feeling like a jumbled together cocktail of a film, and not a tasty one at that.

The Netflix style of release sets a strong precedent for the future of film distribution which we will likely see again, it’s just a shame it couldn’t have been used for a film that was more creative and memorable.