“The 15:17 to Paris” doesn’t quite reach its intended destination 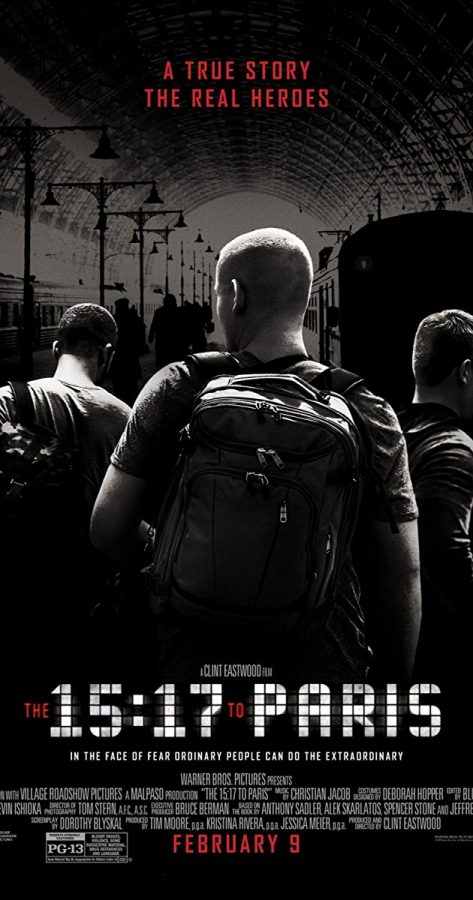 Official movie poster for Clint Eastwood's "The 15:17 to Paris".

We’ve always loved ourselves a dashing, captivating story of an American hero- an average underdog beaten and underestimated until a crowning moment of fate. With the overwhelming foreign sentiments after the 9/11 attacks, an American hero in the face of acts of terrorism is not an estranged sight.

The 15:17 to Paris is Clint Eastwood’s latest cinematic project, released in theatres Feb 9. The film is based on the autobiography of the same title and follows the events of the 2015 Thalys train attack in which a Moroccan gunman on a train from Amsterdam to Paris is subdued by three Americans and four others of whom are British and French, but the film mainly surrounds the actions of the Americans- two of them soldiers.

Though the story itself was interesting and definitely one of heroism, the film itself felt a bit empty.

A couple things stood out in this film and one of them was notably the cast. The heroes played themselves- literally.

The three Americans who were there that day, Anthony Sadler, Alek Skarlatos and Spencer Stone, and a Frenchman, Mark Moogalian, portrayed themselves on screen rather than professional actors. Though taking this route seems like a great idea, considering the fact that these three were, in itself, definitely not actors and that they had to reenact that traumatic event, in which one of them gets shot in the neck by the way, is a total hit and miss.

Another note to mention is the story-telling of the film. In actuality, the showdown between the gunman and the brave civilians who stood up against him probably only took a minimum of less than half an hour and yet the movie dragged on to be a short but longer-than-it-needs-to-be 94 minutes. In that time, Eastwood decidedly portrays Sadler, Skarlato and Spencer’s childhoods as flashbacks, as the three grew up together, before the dramatic climax of the movie.

Though this was a smart tactic on Eastwood’s part, it felt dragged and more like a moot point Eastwood was trying to make to make the build-up more climactic.

In addition to that, the real-life event was nearly three years ago and this film being released at this time just seemed like scratching at a scab.

There was nothing much around the edges to perfectly sandwich the train attack itself into a cohesive cinematic medium. The 15:17 to Paris itself has a very interesting story to tell but this film itself seemed as if Eastwood was trying too hard to make a documentary-based drama off of this short but traumatic clash between the gunman and the train passengers, and it just didn’t quite hit its main target.