The Death Cure cures finale for the Maze Runner films 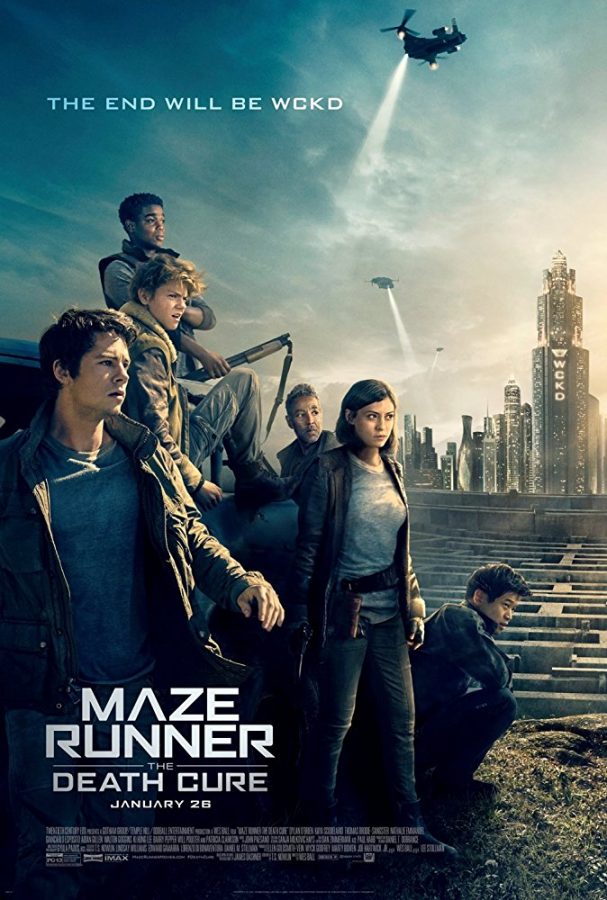 The looming presence of dystopian young adult novels are constant and have been present since the movie adaptation of The Hunger Games back in 2012. The Death Cure, though not entirely disappointing, sets the notion that not much is different from similar series.

Maze Runner: The Death Cure opened in cinemas Jan 26 as the last installment of the Maze Runner movie franchise. This adaptation of the third book in this beloved series from author James Dashner follows the suspense and action of Thomas, played by Dylan O’Brien, and his rag-tag group of friends, who call themselves “Gladers”, as they travel cross-country to rescue one of their own while narrowly avoiding zombies.

The movie starts out with a Mad Max-like scene, with a car chase, ambushes, and sabotaging a train carrying precious cargo, i.e. “immune” teenagers. This directly follows up the way the previous movie, The Scorch Trials, ended, with Thomas vowing to rescue Minho, played by Ki Hong Lee, after being taken by W.C.K.D., or WICKED in the books, an organization that focused on finding a cure to the deadly virus by “harvesting” teenagers of the enzymes in their blood that make them immune.

In the film, the whole premise of The Death Cure was rescuing Minho and running from W.C.K.D. to avoid human experiments and just the morality of keeping teenagers barely-alive for the sole purpose of “the greater good”. Meanwhile, the book is more or less similar to the plot of the cinematic adaptation of The Scorch Trials and touches upon the restoration of the Gladers’ memories, which the movies did not touch upon at all.

The movie also adds extra concepts, like the complete exploding of the walled-in city that housed W.C.K.D. ’s headquarters by a bunch of revolutionists and revealing that the only actual cure can come from Thomas’ blood near the end. In addition to the general plot of the book and the movie completely straying far from each other, a major point to mention is how the cinematic medium decided to deal with one of the most dynamic, emotional scenes in the book: Newt’s death.

Newt, portrayed by Thomas Brodie-Sangster, is, besides from Minho, Thomas’ closest friend. Newt is more so the group’s level-headed member and provided Thomas with rational thinking as Thomas was more of the “jump in head first” kind of guy.

Both mediums followed the same promise of Newt being infected with the virus, unlike what they all thought, but differentiated in the execution- no pun intended.

Everyone already knew about Newt’s predicament from the beginning in the book and proceeded with caution in order to keep him alive as long as possible but it was Newt’s own decision to run off with the other infected beings, “Cranks”, to prevent the disease from spreading.

The film played this out by not revealing Newt’s infection until later in the film after a short outburst concerning sneaking into the W.C.K.D. headquarters. In addition to that, instead of taking safety precautions, the film followed Newt as he still went with the others to infiltrate the base.

His death, of course, was inevitable. The film still kept his memorable line, “Please, Tommy. Please,” but instead of a more efficient and quick emotion-inducing bullet to the head, his death scene dragged on to include a short kill-or-be-killed fight and ended with an accidental knife to the chest as Thomas tried to keep Newt as sane as he still could be for as long as possible, just in enough time to get the serum for the “cure” from Brenda, played by Rosa Salazar.

Though still dramatic and emotional cinematically, the essence of the scene in general was lost to the slow sequence of Thomas’ reluctance to take Newt out of his misery.

The ending, though perfect for the movie and the film franchise itself, was completely different. It was more close-ended than the book’s open-ended one, with the immunes and some others on a seemingly secluded island far away from where they originally were, the “safe haven” as they called it, where they start to rebuild society from scratch.

Without the background context of the books, the movies in itself were beautifully produced and the plotlines were interesting. The soundtrack fit well to add suspense and sentiment for those watching and the ending was enough for a perfect close to the series, but for those who had expectations from the young adult sci-fi novels, it was up to par at best and missed the whole plot indefinitely.

There is a lot more to say about this film and the lack of similarities there are between itself and its origins are disconcerting but all in all, The Death Cure was thoroughly enjoyable. With action sequences and anarchist-like devious planning by a bunch of stubborn teenagers portrayed by a well-picked cast, it certainly was a substantial film that fit the young adult, dystopian trope very well.