Review: Call Me by Your Name is a masterpiece that reveals the joy and sorrow of first love 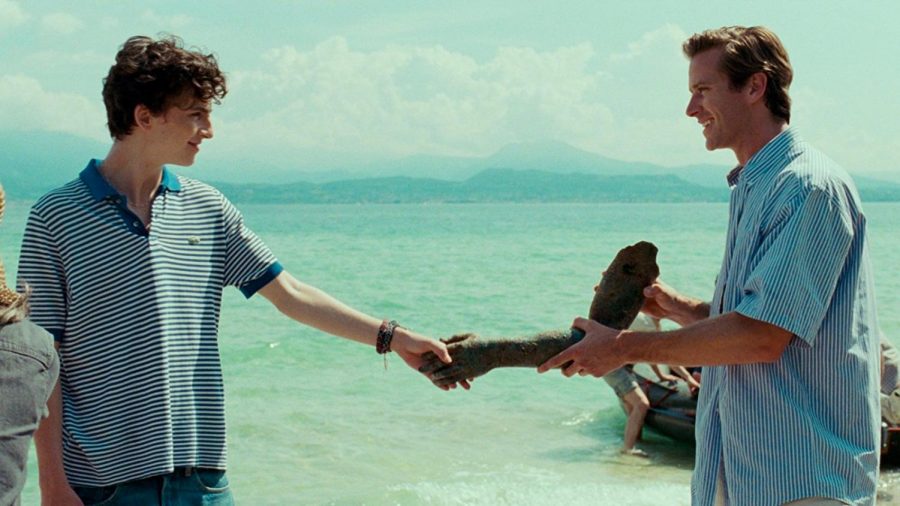 Elio and Oliver's "Truce" scene from "Call Me by Your Name"

DISCLAIMER: Call Me by Your Name is rated R. You must be 17 years or older, or accompanied by a guardian in order to view it. The Talon does NOT encourage underage students to see the movie illegally or without a guardian.

“Call me by your name and I’ll call you by mine.” These are the words uttered as a token of the love Elio and Oliver share together during the magical summer of 1983 where they both discovered the nature of love, changing them forever. What results is a near perfect film that I’m going to remember for many years to come.

“Call Me by Your Name” is based off the book by André Aciman and is the story of a young teenage boy Elio, played by Timothée Chalamet, who spends the summer of 1983 in Northern Italy with his family. His father, a professor played by Michael Stuhlbarg, has a research assistant Oliver, played by Armie Hammer, stay at their summer house with them.

Elio and Oliver start off being indifferent towards each other and Elio in particular shows signs of being annoyed by Oliver mostly because of their opposite personalities. Elio is quiet, mostly does local activities like swimming by himself, and concentrates on reading and playing music. Oliver, however, socializes with Elio’s family well and adapts to Italian customs quickly. Once they both meet, they bond, fall in love, and form a secret relationship from there.

The film is a coming of age tale of first love, but through the lens of people who would’ve been ostracized by society had this gotten out. The film doesn’t focus on conflict of society and what would happen if they found out, but instead focuses on simply Elio, Oliver, and their experience of falling in love for the first time.

“Call Me by Your Name” plain and simply put is one of the best love stories to grace the big screen in a very long time. Director Luca Guadagnino takes the simple situation and characters and masterfully conveys the emotions one experiences in their very first love, both positive and negative.

Elio’s love and desire for Oliver develops throughout the first half of the movie, and it is portrayed realistically on both acting and technical fronts. Chalamet brings out every possible emotion Elio experiences, with very little dialogue to back him up. His looks, his walks, and his long stares at Oliver from a distance will take anybody back to the first time they realized they were in love. This performance is so nuanced, passionate, and emotional that it might just be the greatest performance I’ve seen all year, and Chalamet most definitely has a promising future in Hollywood after this.

Hammer does a remarkable job at portraying Oliver as a social and lovable figure for Elio to fall for, with a few scenes of him speaking to Elio where his love is subtly brought out as well. Oliver is not just a static character that is used to develop Elio, hidden aspects of his character are revealed through his actions and the way he interacts with Elio, such as him giving himself a joyous look when he’s finally alone after talking to him.

The technical aspects of the film also work masterfully to portray Elio’s love for Oliver, where the camera will get at unique angles, or use natural objects as framing to make this love truly come to life. One instance is the dance party scene where Elio sits and observes Oliver dancing from a distance.

A steady, simple shot of Elio smoking and gazing at Oliver is followed with vibrant, mobile shots of Oliver dancing slowly, until Elio joins in with the camera focusing on both of them. These different shots serves to juxtapose Elio’s life at the moment, and the life he could have with Oliver. The low angle of Oliver dancing portrays him as a higher goal Elio should strive for, and the flashing colors of the party engulf him and help to make him seem like a lively, lovable figure whom you want to be with.

Once the walls are broken down and Elio and Oliver finally build their relationship, you are completely invested and rooting for them to be happy together. There’s a lull in the middle where they barely speak to each other and it’s even unsatisfying to watch, however this is how you’re supposed to feel. Elio himself at this period feels desperate, lonely, and longing to be with Oliver, so the viewer needs to be immersed in that mindset as well.

Elio is the center of this story, and we get to glimpse at how he acts in reaction to discovering love. Elio’s love and desire for Oliver catches him off guard, and gets him to act in a manner unlike him, where sometimes he’ll get worried if Oliver doesn’t respond to him, or he’ll throw up at the thought of Oliver being with someone else. This might be viewed as obsessive, however it’s realistic to experience this when you’re only 17 and fall in love for the very first time, and the film addresses these weirdly relatable angles to first love beautifully.

“Call Me by Your Name” is a love story without much conflict between characters, rising action, or clichés, instead it is simply a portrait of a magical summer Elio and Oliver had together. Nowhere is there a scene where they find each other cheating, and nowhere do they scream at each other for different paths they’re taking, as traditional love story tropes are ignored for the sake of painting this portrait. Instead, it focuses on the little moments they share together that may seem minute, but are actually the world to both of them, and ultimately culminate to portray the magical experience they had together.

By the end of the film, I’m not going to spoil if it’s a happy ending for the two, however it is certainly one of the most emotional endings to a film you will see all year. It’s a very simple idea to end the movie on, and Chalamet continues to show that he has the best performance all year. The end credits are a close up of Elio’s face for a couple minutes, and never have I seen a young actor like Chalamet portray that much emotion with just facial expressions. Definitely sit through this whole end credits sequence if you want to get the maximum experience.

“Call Me by Your Name” is not a film with new layers on the human condition nor does it have a unique deep political message, however it is a story of a young teen coming of age and discovering the joyous as well as sorrowful aspects of first love. It masterfully tackles every angle of what one experiences in this period in their lives with remarkable performances and essential and meaningful production design and cinematography to bring it to life.

The film is groundbreaking for gay people throughout the world to revel in and experience, and for millions of people, young and old, to embrace. Anybody who can recall the first time they realized a person meant the world to them, and anyone who is still trying to find that someone can live in this beautifully done portrait of a film.