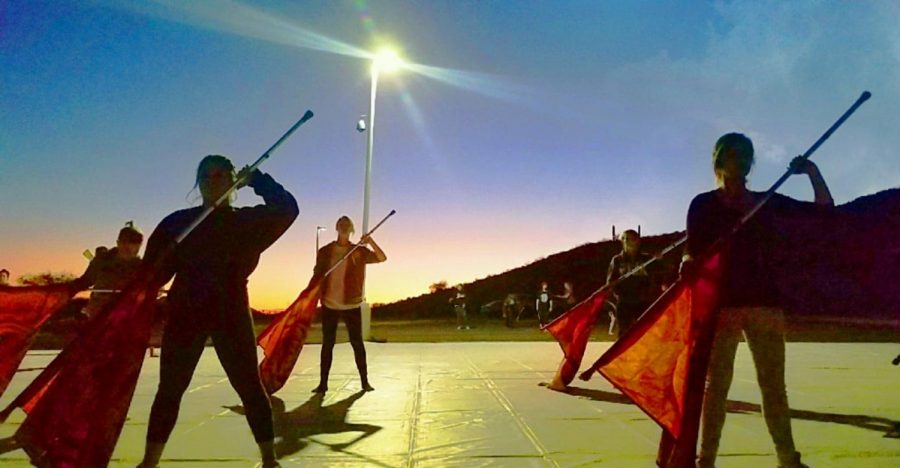 As the sun sets, winter guard keeps practicing for their new show, "You Are Never Alone".

As marching band season comes to a close, band and color guard members are beginning to prepare for the winter guard season. A winterguard show is a production thats created purely from elements relating to colorguard.

An exciting part of the winterguard season is the fact that the performance aspect is still retained, but there are also differences compared to the regular marching band season.

“Guard is what you see when we do our marching band shows; it’s the flags, it’s the rifles, it’s the sabres, it’s the dancing, winterguard is just all that and it’s also all indoors,” said Sean McCormick, sophomore.

Band members, regular guard members, and students outside of marching band all try out for the two winter guard teams. Aiden Bretoi, sophomore, is a member of the low woodwinds section in marching band, but also participates in winterguard during the winter and spring.

“Winterguard is different in the sense of where marching band is very stiff and has very rigid motions, where in winterguard you have to be very fluid with your body and in your work,” Bretoi said.

There are also new opportunities becoming available to winterguard this season.

“We are doing a new thing where we’re allowing 8th graders within our school district to try out and I think that’s gonna be really cool,” said Kris Flanagan, senior.

People come to winterguard from many different backgrounds, which shows that as long as you are interested, winterguard should be something you consider trying out for.

“I’ve had a background in gymnastics and stuff so it’s always been something I’ve done, and it gives you a new perspective,” McCormick said.

Winterguard is a vehicle that helps students finds their passion and channel it through performance. As this is Flanagan’s last season, he said he is excited and sad at the same time.

“When I perform I’m able to give all of myself that I can’t usually do in school or at home… I use all of my emotion and I put it into my performance,” Flanagan said.