What a Movie Mark: The Disaster Artist is a triumph 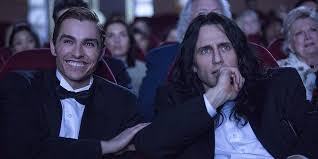 Photo Courtesy of A24

DISCLAIMER: Disaster Artist is rated R. You must be 17 years or older, or accompanied by a guardian in order to view it. The Talon does NOT encourage underage students to see this movie illegally or without a guardian.

It’s been 14 years since the epic tragedy of Johnny, Lisa and Mark hit theaters in the form of “The Room”, and now audiences finally get to see how this monumental piece of film was put together. With “The Disaster Artist”, everyone may finally learn the origins of the legendary quotes “Hi doggy”, “Oh hai Mark” and “You’re tearing me apart, Lisa!”

“The Disaster Artist” is directed by James Franco who also stars as Tommy Wiseau, director and star of “The Room”, a film notorious for how terrible it is. The movie portrays the true story of how this awful film got made at the hand of Wiseau and his friend, Greg Sestero, played by Dave Franco. The film goes in depth on Wiseau’s mysterious and eccentric personality which ultimately leads to the failure of the movie as a whole.

These traits and the quality of “The Room” have made Wiseau iconic on the internet, so the movie could’ve taken the obvious route of just making a silly comedy that continues jokes about him, however it takes a much smarter, more mature approach. The movie instead finds a perfect balance of humanizing Wiseau while also simply having fun with his strange personality.

Because of this smart approach, “The Disaster Artist” is one of the year’s best films. The movie most definitely is hilarious with its portrayal of Wiseau and the real antics he caused during the making of “The Room”, and explanations to iconic moments such as “Oh hai Mark”, and Lisa’s mother’s breast cancer are all there. However, despite not knowing his age, nationality, or where he got all his money, the movie portrays Wiseau as a human.

Wiseau is eccentric, ignorant and a little arrogant, but at his heart, he is a dreamer. Wiseau is not afraid to reach for the stars, and he has no fear in doing so, even if it means doing things that aren’t deemed logical or sane by society. Wiseau puts himself and his dream of being an actor out there for everyone to see.

This allows him to bond with the more sensible Greg Sestero at the beginning, as he is a more constrained person who opens up with his acting abilities after seeing how much Wiseau puts into his acting. The two have a poignant friendship, and despite severe ups and downs they have, they both want each other to succeed and make it big.

Seeing the movie being made and explanations for certain awful scenes was magical, and will please any member of the cult following “The Room” has garnered, however you don’t have to know everything about the original movie to enjoy these scenes. Franco and the writers do a great job of including people who don’t know much about “The Room” in on the jokes as well, by properly developing Wiseau throughout the movie and building up every iconic line to be just as funny to newcomers.

Franco gives his all to portray Wiseau and captures every mannerism and action of his perfectly. Franco isn’t just doing a funny impression of Wiseau, he actually clearly knew the person he was portraying and encapsulated every emotion a man like this would experience.

The rest of the cast is likable and funny enough, but Franco’s performance is clearly the one the film rests on to stay standing. The movie, while being hilarious, has plenty to say about people who dream big in Hollywood or life in general. Society as a whole made fun of Wiseau for dreaming too big and being too eccentric and ambitious, however the film doesn’t portray those as negative traits.

Everybody has a dream in their life, and Wiseau happens to be the most relentless in achieving that dream, and Franco as both an actor and director focused on this aspect of his character to make this a very real and relatable story, as crazy of a story it is.

“The Room” was undeniably a disaster from the result of a man who simply reached too far, however by the end of the story did everyone involved with it really turn out all that bad? This is a key question by the end of the movie, where it doesn’t take a sad approach of Wiseau being humiliated for his horrible movie, but instead takes a more optimistic route of: Maybe he did make it somewhere after all. Even if he didn’t hit the stars he was reaching for, he still might have touched the sky, which is a touching sentiment to dreaming big that will hit home for anybody in his position.

“The Disaster Artist” is a hilarious and touching love letter to people with dreams, and shows the silver linings that exist for the dreamers who maybe don’t have everything work out for them 100% how they envisioned. Anybody who wants to make it big in Hollywood, or anybody who simply has big dreams in life in general can laugh and be inspired by the struggles that emerged while making “The Room”.

If you are someone who wants to laugh while also take new inspiration on how to dream while still staying true to yourself, then you should book a ticket for “The Disaster Artist” right now, because this is a film that you’ll remember long after seeing it. And when you do, be sure to stay after the credits.