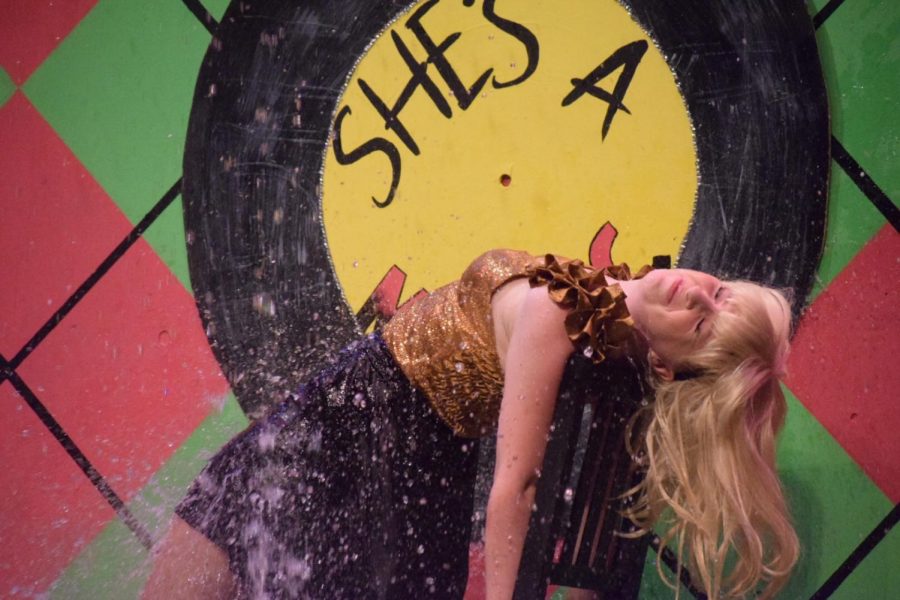 Serenity Mitchell, senior, strikes a pose as water is dumped on her during the performance.

The theater department’s production, “The Wedding Singer”, has brought audiences to their feet, and for good reason.

Their opening night was Wednesday, November 1, with shows also occurring on Thursday and Friday, and a double showing on Saturday. The musical tells the story of Robbie Hart, played by senior Bryce Craig, the lead singer of a wedding band who pursues his true love Julia, played by Addison Bowman, junior.

Other characters included the flamboyant tambourine player George, played by One Griffin, senior, Sammy’s ex-girlfriend Holly played by Serenity Mitchell, senior, Jim the drummer played by Kenny Jones, senior, and an entire ensemble that accented the unique performances of the main actors.

The high quality of actors and actresses cast in the play immersed audiences into the premise and journey of the plot. The level of talent displayed from the theater department impressed audiences with their energetic, intense performances. Craig’s portrayal as Robbie and Bowman’s performance as Julia complemented each other as they led the stage with a passion.

Set design featured many different familiar scenes taken straight out of the 80’s, such as a retro colorful grid pattern displayed throughout the show, hidden references to songs of the time, and backdrops of locations prevalent during that period. The exceptional design complemented the play’s stellar acting and dancing, and made it a visually and aesthetically pleasing show.

A wide variety of costumes were developed to pair with the sets. These ranged from wedding dresses and tuxedos to track suits and sparkly dresses. They helped set the mood of each individual song while still wedging their way into the overlapping 80’s theme.

An assortment of lessons and themes are told through the lyrics of the play’s numbers and scenes. Love, greed, adversity, and perseverance are all portrayed through the timeline of Robbie Hart’s adventure, making it a musical that doesn’t fail to encourage important character traits and inspire audiences.

The script of the play was based on the 1980’s hit movie, but there were also jokes and lines sprinkled throughout that made the viewers laugh. It was overall a very well written set of dialogue.

The most memorable moment of the musical that garnered the most applause and cheers was the scene where Holly had a large stream of water dumped on her in the last song of Act 1, entitled “Saturday Night in The City”. It was a stunt that had never been pulled off by theater before and that shocked audiences during both the opening night showing and the preview showings.

Overall, “The Wedding Singer” was an excellent play that would be recommended for anybody to go see to get a nice break from the daily grind of the school day and homework. Once again, theater has rehearsed vigorously and created a production that is worthy of a great deal of praise.