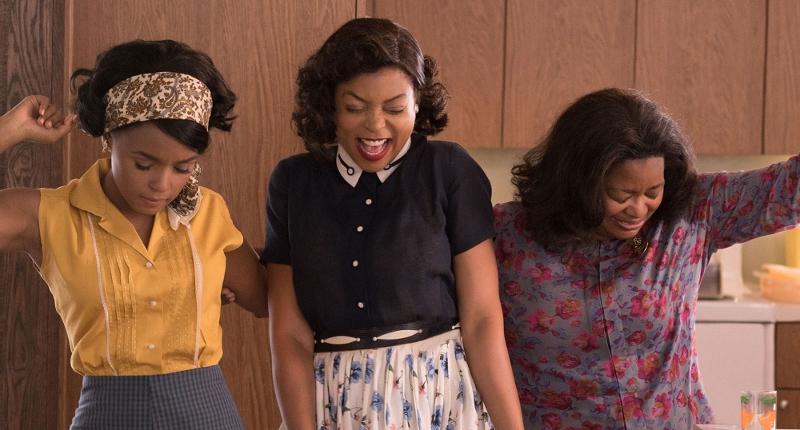 Mary, Katherine, and Dorothy grow closer as friends throughout the film as they overcome the oppression they face.

Hidden Figures, which came out December 25th, features Octavia Spencer, Taraiji P. Henson and Janelle Monáe in the revolutionary film highlighting the minds behind the first man to orbit the earth.

This drama is based on the true story of the African-American women who overcame the oppression constantly thrown at them to became valuable assets to the NASA teams.

The film tells the story of Katherine G. Johnson and her intelligent co-workers Dorothy Vaughan and Mary Jackson as they helped NASA in the space race that captivated the nation. These overlooked geniuses did some of the most important calculations in launching astronaut John Glenn into orbit around the earth.

The movie brought light to these women who faced discrimination constantly in the workplace, from being mistaken for maids to having to work so much harder than their white co-workers to finally getting recognition for their outstanding work.

The calculations the main character Katherine made in the film were much more advanced and were made faster than the men she worked with, but she was still forced to put someone else’s name on her work. Later on after being forced to drink from a separate coffee cup from her white co-workers, she snaps from the stress and embarrassment. However, after her monumental outburst, her co-workers begin to lighten up and see her side of things. Her courage in speaking up for herself lasted throughout the movie and made sure she was recognized for her vital contributions as she overcame every obstacle thrown at her.

Katherine isn’t the only strong role in the film, her two loyal friends Dorothy Vaughan and Mary Jackson also show how hard they had to work to be seen for what they could do and not their skin tone.

Dorothy runs the team of African american women working as their supervisor but is not granted the title or pay of the supervisor. Throughout the movie she learns of the computer being built to replace her team, instead of looking for new work and accepting the replacement, she works hard and learns FORTRAN and teaches her co-workers, securing their jobs as they are vital assets to NASA again.

Mary Jackson is a bright young women not afraid to speak up for what she believes. She is introduced in the opening not being afraid to speak up to a white male cop that stops by the women while they fix their car on the way to work. The way she fearlessly accepts the cop’s request for a police escort to NASA paves the way for her character as she grows throughout the movie. With a husband at her home obsessed with social justice, she herself faces injustice just as the other women did, however instead of silently accepting it, like some of her coworkers, she stands up for herself and doesn’t give up. Her goal in the film is to be a certified engineer, however the only classes being taught were at an all-white college. She gets granted permission to attend the night classes, this came to a surprise for everyone including herself, but she succeeds in these classes as the only women and only non-white person in her classes.

The powerful characters brought to life on the screen form a bond with the audience shocking the viewers with the women’s strength in the toughest conditions.

Hidden Figures brought much needed recognition to these unseen heroes in a way that brought laughter and tears to many. The movie brings a perfect blend of history and excitement to the screen and is worth the watch as you leave the movie inspired and astounded.