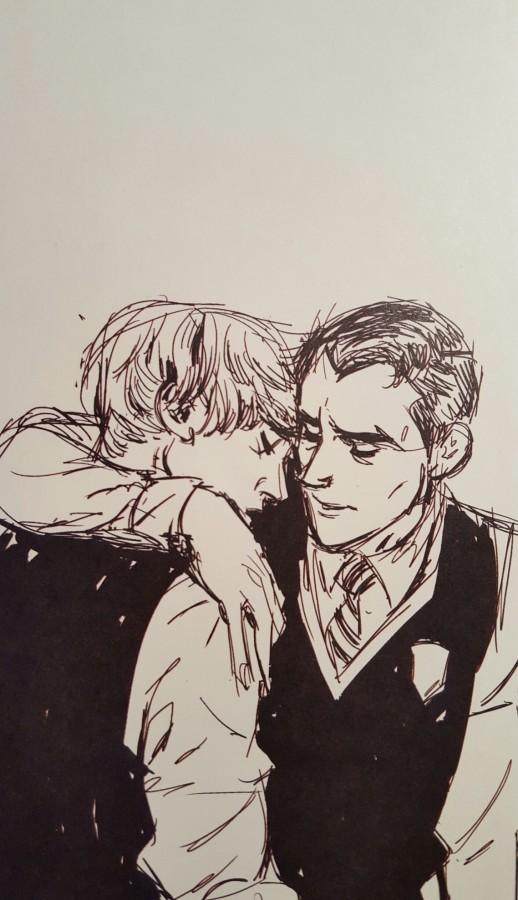 Characters Baz Grimm-Pitch and Simon Snow in fanart by Leela Wagner. It can be found in the collector’s editon of Fangirl by Rainbow Rowell.

In 2013, Rainbow Rowell released her novel titled Fangirl which tells the story of a girl named Cather who writes Simon Snow fanfiction, which she titles Carry On, Simon.
Simon Snow is a fictional- fictional character, meaning Rowell wrote a fictional series of books, The Simon Snow series, into a fictional book, Fangirl. It’s like what John Green did with An Imperial Affliction in The Fault in Our Stars.
When I had the pleasure of reading Fangirl all I could think about when I finished was how much I wanted to read the entire story of Simon Snow. So imagine my joy when I discovered that Carry On was just that. Simon Snow’s story.
On Oct. 6, Rowell released her newest book titled Carry On which follows a young magician, Simon Snow, as he struggles with the world of Magicks as well as the normal struggles of a teenager.

Personally I feel that Carry On deserves its own genre of literature because of the numerous topics it touches on. Normally Carry On would be classified as a fantasy novel, but I believe it should be called a mysterious coming of age young adult fantasy novel with a touch of romance.
When we meet Simon and his gang of magicians they are in their 8th and final year of school at Watford School of Magicks. We know Simon is the Chosen One, the most powerful magician ever seen, and according to his roommate and arch nemesis,Tyrannus Basilton Grimm- Pitch, he’s also the worst magician.
Not only does Simon struggle with daily adolescent drama like dating and school, but he also deals with having the weight of the world on his shoulders and the impending downfall of his society.
Raised as a Normal, or non-magick, Simon is unaware of his magical gifts until the age of 11 when the Mage,the head of the Magick society, discovers him and brings him to Watford.
Carry On follows Simon, his best friend, Penelope Bunce, his ex- girlfriend, Agatha Wellbelove and Tyrannus Basilton Grimm- Pitch also known as Baz, as they fight to save the Magickal world from the Insidious Humdrum, that for some unknown reason has taken the face of Simon Snow himself.
Carry On is a wonderful book that keeps you guessing and wondering with each turn of the page. It has the irresistible girly romance everyone wants that is down played with witty humor and fantastical plot points.
If you have ever read one of Rainbow Rowell’s other novels such as Eleanor and Park or Fangirl and fell in love with it, I highly recommend this book for you.