Take a bite out of The Vampire Diaries 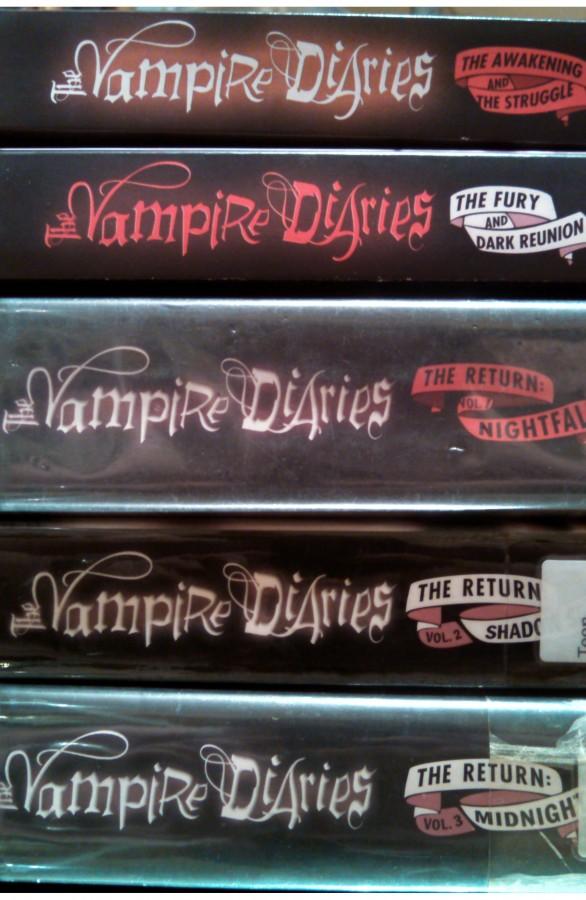 The first seven books are a combination of two series. The first is made up of four book and the second series,The Return, is made of three books.

The epic love triangle between Elena Gilbert and vampire brothers, Stefan and Damon Salvatore, is sweeping the nation in both the forms of books and a television drama.
In 2005 the world was swept into the vampire craze with edition of Twilight to bookstore shelves. Even though Twilight was not the first vampire romance novel to be released, it was what kick-started the vampire craze.
In 1991, L.J. Smith published the first book in The Vampire Diaries series, “The Awakening.”
In 2009, Kevin Williamson and Julie Plec released the supernatural drama television series The Vampire Diaries on the CW Network. The show is currently in its sixth season with some 2.68 million viewers on average.
Both the book and television series follow the main character Elena Gilbert, as she deals with the ups and downs of being a high school teenager in and out of love. Elena’s life is struck by tragedy when her parents die in a car accident.
From this point, the books and the shows begin to show differences.
Characters’ Names and Backgrounds

After Elena’s parents die in the book, her and her little sister, Margaret, move in with their aunt Judith.

On the show, Elena and her younger brother, Jeremy, move in with their aunt, Jenna, who is not much older than them.

On the show, Elena has two best friends, Bonnie Bennett and Caroline Forbes as well as Matt Donovan who remains Elena’s ex and childhood friend.

In both, the Salvatore brothers, Stefan and Damon, are dashing vampires, turned by Elena’s doppelganger, Katherine.

In the books however, newly created German vampire, Katherine Von Schwartschild, turns the Salvatore brothers into vampires during the renaissance period in Italy, making the brothers roughly 500 years old at the time of the books plot.

On the show Katherine Pierce or Katerina Petrova is a roughly 400 years old Bulgarian vampire, when she turns the brothers during the Civil War, making the brothers at least 150 years old on the show.

On the show a major group of vampires are known as the Originals, which includes a vampire named Klaus who was created during the time when vikings came to America.

In the books Klaus is a minor character who was created before the creation of the pyramids of Egypt.
Characters’ Appearances
Elena, as well as her doppelganger Katherine are described as having very light gold hair and deep blue eyes, with extremely fair pale skin in the book. On the show Elena and Katherine, are portrayed by Nina Dobrev who has chocolate brown hair and eyes as well as a rich tan.
Bonnie is described as having fire red hair and emerald green eyes whereas her show counterpart is portrayed by Kat Graham who is in fact African American. In the book, Bonnie is a Celtic witch, and in the show she is an infamous Bennett witch.
Caroline is described as having lush auburn hair and a golden tan. Candice Accola, her TV counterpart, has blonde hair and pale skin.
Damon is described as having straight black hair and obsidian eyes. On the show he is portrayed by Ian Somerhalder who has fair blue eyes.
Stefan is describe to have wavy dark hair and emerald green eyes and Paul Wesley captures this look relatively well.
Storyline
In the obvious sense the show doesn’t have the same plot line as the books, for a simple reason, some characters are missing or have been replaced.
A main difference is the point at which Elena turns into a vampire. In the books, Elena goes off a bridge during a storm created by her doppelganger Katherine. After she drowns, the blood given to her by Damon through blood exchange turns her into a vampire. Her transformation occurs at the end of book one.
On the show, Elena dies when Matt steers his car off of the bridge to avoid hitting the orginal, Rebekah Mikaelson, whom I have yet to encounter in the books. Prior to Elena dying, she experiences a brain injury which Meredith Fell cures with a vile of Damon’s blood, and this blood is what causes Elena’s vampirism. This occurs during the season three finale.
Another extremely major difference is Elena’s love interest. From season one to season four episode six Elena is in love with Stefan and then she falls for Damon.
In the books she is in love with Stefan all throughout, only feeling brotherly love toward Damon, who is in love with Elena.
Overall opinion
Even though there are many differences between the show and books, I enjoy both equally. As I continue to finish the books, I choose not to associate the two in order to keep an unbiased opinion.