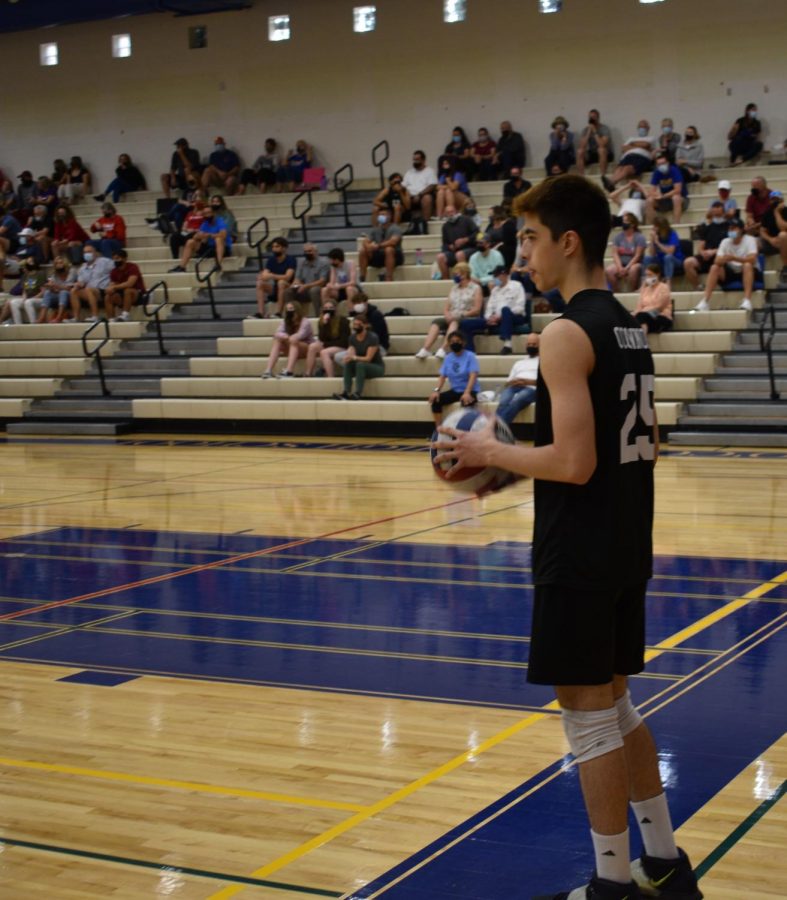 Sevastian Malcom, junior, preparing to serve against his opponent, LHS.

As the 2020-2021 boys’ volleyball season begins, there is a lot of buzz regarding their success and hopes for the season. After being tragically shut down last season due to COVID-19, OHS boys’ volleyball is even more eager to get back out onto the court and dominate their opponents.

With the sudden cancelation of their season last year, many athletes were very disappointed in the outcome, but some took initiative and tried to take advantage of the time off and train so that for next season, they are able to perform to the best of their abilities. So far, the OHS boys volleyball season seems to be going apparently well as they are (stats). Both the OHS varsity and junior varsity are both off to a spectacular start this season.

“ [The season] is going fairly well. As a team we have probably the best put together group of athletes we have ever had,” said Jake Ortale, junior.

As far as skill and performance wise, OHS boys’ volleyball does not seem to be lacking any talent or drive as the previous loss of their season has really changed the viewpoints of some athletes and made them strive to be greater.

“Even though we have a season this year, losing it has shown me that you can never take any time for granted and that you can always be there for your teammates on and off the court,” Ortale said.

Ortale took the loss of his season pretty badly, but never failed to continue his passion in volleyball. When playing a team sport, your team is much like a family, and losing a season means he also lost his “family”, which is a loss for anybody. Ortale views OHS volleyball as a bonding experience between his teammates, coaches, and him.

“The community compared to other schools is just so uplifting. I find myself always happy and enjoying every minute, plus the coaches and teammates, which are my family,” Ortale said.

Besides the family element, OHS boys’ volleyball also lost an opportunity to improve and work on their skill set but by the looks of it, not much improvement is needed.

“I’m excited to start getting to work with our squad this year. This group of guys is something special. Our program hasn’t had this much talent ever and I’m excited to see how far we go and what we become,” said Sam Zaporowski, senior.

OHS boys volleyball is always looking to improve and make it to their ultimate goal, the championship.

“Every practice there’s always a goal: To become the hardest working team in the state,” Zaporowski said. “I think this year, we have one the the biggest opportunities ever to win state. The expectation is to play on the championship court.”

Zaporowski, being a senior and committed to playing men’s volleyball at North Greenville University (NGU), his drive for success is heightened and he is determined to make it to the championship and prove that the time off did no harm to his team, talent, or charisma.

“I think we have a really good team and a bunch of dedicated guys, and if we do well in the practice gym, we can be standing there at the end,” said Troy Dueling, boys’ volleyball coach.

Dueling is the head boys’ varsity coach at OHS, and has huge hopes and aspirations for the upcoming season. With losing his season last year, he thinks that his team  will be contenders for state.

“Last year we had a really good start to the season. We were 12-1 and had just won a huge tournament and then obviously COVID hit,” Dueling said. “I think that we are all more grateful for the season this year.”

“I think there is probably a great sense of gratitude from everybody. Everybody just seems to be back in the gym and competing again. I think that everybody on the team last year knew we had something special going on and to have it taken away, everybody has the same level of urgency,” Dueling said.

Team charisma is ideal for a successful team and Dueling believes that his team has excellent chemistry and works together well to create good bonds between the teammates, which results in great communication within the team.

“We all appreciate the game a little more after losing our season,” said Tate Miller, junior.

With losing a season comes the grief of losing an opportunity to grow and develop with your team. Although the time off did not seem to seriously affect OHS boys’ volleyball, it is still hard to lose a chance to play with your team and see how far you can go. You only play a sport for so long until you either have to give it up or lose the passion, so losing an opportunity to do something you love is a major disappointment.

“I’ll miss the positive culture that our team has created and our competitive atmosphere to get better,” Miller said.

Hi my name is Kaitlyn Smitten and I am a sophomore. This is my first year on The Talon. I joined The Talon because I have a passion for writing and would...