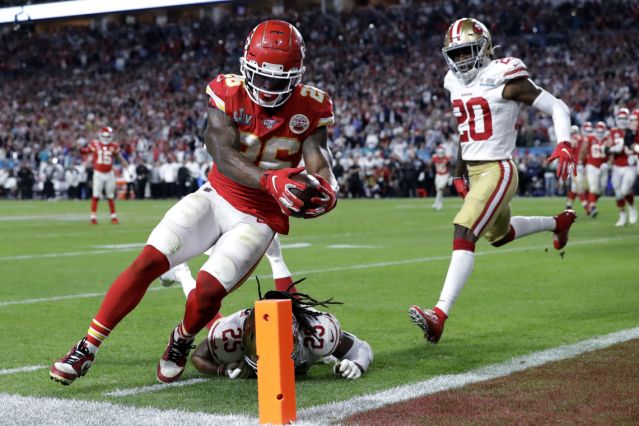 Patrick Mahomes played some of the worst football of his career during the first three and a half quarters of the Super Bowl. He threw two interceptions and looked nothing like the magical quarterback we saw throughout the postseason. He was pressured by the menacing 49ers’ pass rush and never looked comfortable in the pocket. Then he flipped a switch, leading the Kansas City Chiefs to their first Super Bowl in 50 years, beating the San Francisco 49ers by a score of 31-20.

Facing third and 15 with seven minutes left and a daunting 10-point deficit, Mahomes made the play of the game with a 44-yard bomb to Tyreek Hill. The 49ers’ defense, which had shut down the Chiefs for much of the game, would never recover from that play. Later that drive, Mahomes would throw a touchdown to Travis Kelce, then lead his team on another touchdown drive that ended in a touchdown pass to Damien Williams and the Chiefs taking a 24-20 lead.

The 49ers seemed to be in control the entire game, striking first with a field goal on their first drive. Though the Chiefs would respond with a touchdown run by Mahomes, followed by another field goal, the 49ers would tie the game at 10 following Jimmy Garoppolo’s touchdown to fullback Kyle Juszczyk. On the next drive, the 49ers forced a Kansas City punt, giving them a chance to score before halftime. Inexplicably, Coach Kyle Shanahan elected to run the ball, seemingly throwing away any chance of scoring. He dialed up a deep pass to star tight end George Kittle that gained 42 yards, but it was overturned due to offensive pass interference, leading to the end of the half. Shanahan’s poor clock management at the end of the first half would prove to hurt his team down the stretch.

Coming out of halftime, the 49ers looked dominant. They scored a field goal out of the gates, then forced an interception by Mahomes, which turned into a touchdown run by breakout star Raheem Mostert. On the next Chiefs’ drive, Mahomes made one of the worst decisions of his career, throwing a terrible interception to Tavarious Moore. This gave the 49ers the ball with a 20-10 lead and only 12 minutes left to play. The ensuing collapse was one that Shanahan would like to forget.

After gaining one first down, Shanahan wisely elected to run the ball to Mostert, resulting in a one yard gain. Seemingly rattled, Shanahan decided to pass on second down with his untested quarterback, leading to an incompletion and eventual punt. It was then that Mahomes and Company embarked on another double digit comeback. After Mahomes’ first touchdown pass, Shanahan once again went away from the run, resulting in comparisons to his days as the Atlanta Falcons’ offensive coordinator, where he threw away a 28-3 lead against the New England Patriots in Super Bowl LI. On first down, Mostert ran for five yards, but once again, Shanahan turned away from his strong running game, opting for two passes that resulted in incompletions that stopped the clock, giving Mahomes more time to work his magic.

After the ensuing punt, Mahomes calmly led his team down the field, and facing third and goal, he checked down to Williams in the flat, who dived to the pylon for a touchdown. In a matter of minutes, the 49ers’ lead had evaporated. Garoppolo would attempt to bring the 49ers back, but he threw three straight incompletions, resulting in a turnover on downs. Williams would put the final nail in the coffin as he got loose for a 38-yard touchdown, sealing the game.

Despite his mediocre performance to start the game, Mahomes won the Super Bowl MVP as he finished with 268 yards, two touchdowns, and two interceptions. Most importantly, he came up clutch in the last quarter as he was able to shrug off the difficulties he faced earlier in the game. At just 24 years old, Mahomes seems poised to become the face of the NFL, and bring the Chiefs back to the game’s biggest stage as Kansas City looks to establish their own dynasty.