The ups and downs of “Judas and the Black Messiah” 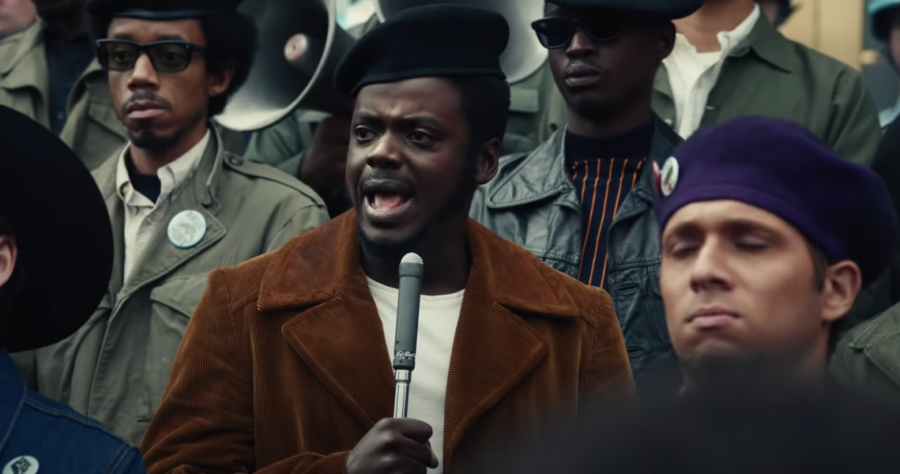 In “Judas and the Black Messiah,” William O’Neal, played by LaKeith Stanfield, infiltrates the Illinois chapter of the Black Panther party in order to gather intelligence on Chairman Fred Hampton, played by Daniel Kaluuya. Kaluuya gives an electrifying performance that raises the hairs on the back of your neck. As Fred Hampton, the murdered chairman of the Illinois Black Panther Party, Kaluuya is riveting as he prowls the stage, inspiring his audiences. His speeches burn with intensity and conviction. When FBI informant William O’Neal (LaKeith Stanfield), the Judas in the title, tells his handler Roy Mitchell (Jesse Plemons) that Hampton “could sell salt to a slug,” it’s not hyperbole; Kaluuya makes you believe he’ll succeed in his mission to unite a “rainbow coalition” of people of all races against a common enemy. It’s stellar work that will be talked about for some time, and it buys a lot of goodwill for a film that has some serious script problems.

Fred Hampton’s preternatural ability to bring potential enemies and rivals together made him dangerous to an America all too happy with the racist status quo. So he became yet another entry in the “Black Messiah” christening sweepstakes the FBI kept awarding after their prior candidates for the title were assassinated. Hampton would be assassinated as well, on December 4, 1969, exactly 20 months after the last “Black Messiah,” Dr. Martin Luther King Jr., was killed. O’Neal played a large role in facilitating this tragedy, providing Hampton’s apartment layout and even doing a bit of the FBI’s dirty work a few hours before. Since he was a trusted confidant whose ultimate goal was betrayal, the biblical allusion in the title is an appropriate one.

Though he’s not as fleshed out as Jesus is in the Good Book, Judas remains perhaps the most important supporting character in the Gospels. Here, however, Judas is technically the lead, which wouldn’t be a problem if the script by director Shaka King and Will Berson had made him as compelling as Hampton. Instead, much of the role languishes in one-note scenes between him and the FBI agent who’s holding jail time over his head. In the recreation that opens the film, O’Neal appears in the PBS documentary, “Eyes On the Prize 2”, saying he trusted Mitchell and even saw him as a figure to emulate. Little of that comes through in the scenes between Plemons and Stanfield, though there are moments where it appears the film may deepen this fraught relationship. A scene where Mitchell invites O’Neal to his home and offers him the good scotch is rife with potential for examining how an act of implied white civility could engender trust; instead the scene ends with some clunky dialogue about money.

We also spend too much time within the FBI. Despite the excellent cinematography by Sean Bobbitt and the editing by Kristan Sprague, these sequences are not as interesting as anything featuring the Black Panthers and their goals. As “MLK/FBI” showed, J. Edgar Hoover took an active role in trying to squash any type of black attempt to force the country to provide equality and reckon with its racial and economic sins. Here, Hoover is played by Martin Sheen under so much makeup he looks like a melted candle, and he gets the film’s worst scene, stopping the momentum cold with dialogue that references the Korean War, protecting one’s family and the possibilities of Mitchell’s eight-month-old daughter dating a black man. Plemons looks as flabbergasted as the audience feels.

Had “Judas and the Black Messiah” focused primarily on O’Neal earning Hampton’s trust, it would have worked better. There are millions of other movies that have done this better, but this film really soars when we’re with the Black Panthers. And it’s not just Kaluuya’s excellent work, it’s also Dominique Fishback as his girlfriend, Deborah Johnson. Their flirty back-and-forth results in a believable romance, made all the more bittersweet by our knowledge of how it will end. Fishback is so good, especially in her heartbreaking final scene, that you wish she had more screen time.

King also excels at depicting harrowing scenes of violence. A subplot involving a character described as “a square” ultimately breaking down and resorting to a vengeful shoot-out with the cops is notable both for how unflinching it is and for a scene where the man’s mother laments that this will be his legacy. These and other brutal scenes foreshadow the Panthers’ final confrontation with a law enforcement department that was clearly breaking the law.

Stanfield gives his all in an underwritten part that keeps his role at arm’s length. It’s an uphill battle that I found commendable even if it lacked a deeper dive into his motivations. How does he feel about being an informant? Is he just in it for the money? More than once, he does something that muddies the waters of intent, but we never get a bead on how affected he may be, nor is the connection between O’Neal and Hampton deep enough for us to feel the full emotional weight of the FBI’s figurative thirty pieces of silver. Yet this is a film that requires more contemplation than a Sundance Film Festival review’s deadline will allow. I want to sit with it some more, see it again, and consider a few things. I feel like I owe it that. For now, however, it’s a marginal recommendation with some reservations.