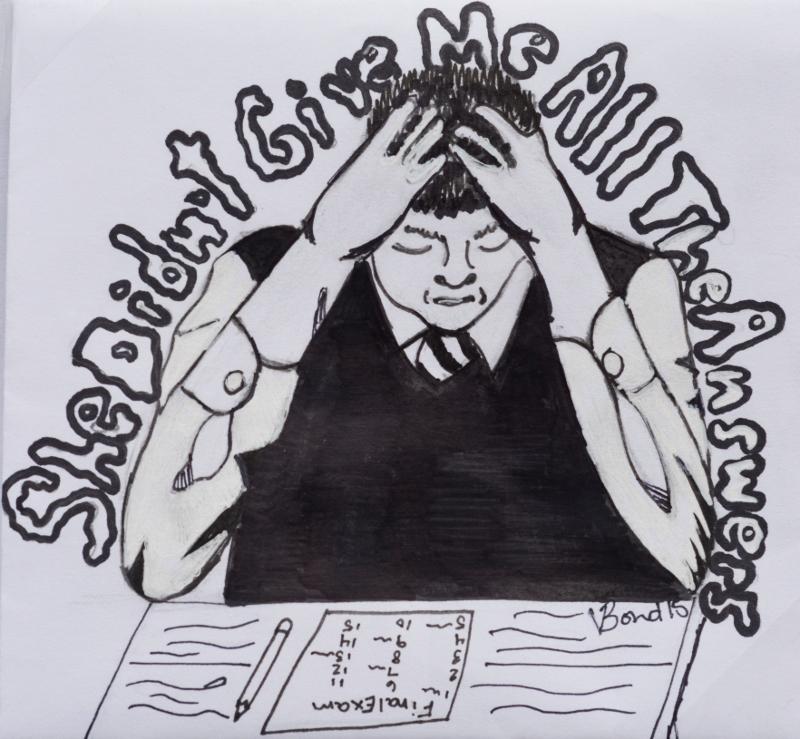 Students often stress themselves out during finals, but instead shift the blame to the teachers that instructed them all semester long, as shown in this cartoon,

Hands dug into the scalp, discarded papers crumpled around the drained computer and a student crippled by anxiety haunt the stuffy room. No, this is not a CEO trying to plan a massive business decision, but just a typical high school senior the day before their third SAT.

College preparation hits like an underestimated tsunami, in that students are warned it is coming, but rarely do they understand the gravity of the situation.

While OHS is boasted as a school that prepares students for college, actual prep for college is lacking. In order for students to feel more comfortable throughout their senior year, an overhaul is called for.

A school sponsored club or organization for students to receive guidance in managing senior responsibilities is vital.

A schoolwide SAT and ACT study group could easily fit into this organization. The school has had professional’s help in the past, however, this was not advertised well and caused a financial burden on several students. A club could remedy this, allowing both students and teachers to streamline their resources into one vessel.

While standardized tests are necessary for college admission, students must first know what direction they should take their lives, both professionally and academically.

A system similar to the one used in Society of Female Scholars would be extremely beneficial; teachers that are willing to donate their time could be assigned a few seniors for the year, meeting every week and aiding their students in their searches for scholarships, careers, and colleges.

This could be considered a “senior mentor” program, which is just as necessary- if not more so- than mentors for lower classmen, seeing as seniors are also entering into a critical stage in their lives.

A program of this type could also incorporate other benefits, such as compiling a massive list of resources that would help students be admitted to, pay for, and look for opportunities in certain colleges.

Should something like this come to fruition, one mistake that cannot be made is a lack of commitment. Hours dedicated to it could be some of the most productive spent on school grounds, but students and staff must understand that this would provide direct, applicable advice that most future graduates could only dream of.

Regardless, there will be critics of this idea that will harp on the fact that OHS does not have the resources needed to pull off a club of this type. While it is commonly known that public schools are lacking in funds, college prep must take precedence in an educational system that aims for one goal above all else: move students into a level at which they are ready for secondary education.

Sacrifices have to be made, especially for a program that is long overdue.
All this is said with one certainty, that being the fact that there would be minimal, if any, student opposition to a club that would give them newfound confidence in their decisions.