Students get tested on civics 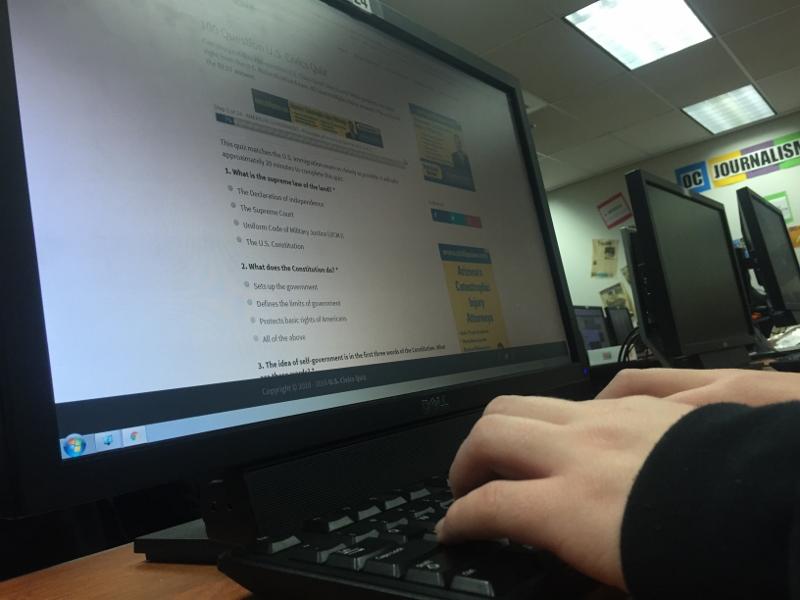 The Civics Test debuted to students in the classes of 2017 and below January 5, testing students on their knowledge on the United States Government and history. This test is a result of the American Civics Act passed by the state legislature.

Scoring a 60 percent or higher is required to graduate, and if passed it is no longer required to take throughout high school.

“The Civics Test is (an) 100-question test that is drawn directly from the U.S Naturalization and Immigration Test, if you’re going to be a naturalized citizen they’ll take ten random questions from it, the Civics Test is all 100 questions.” said Wooton.

Wooton said the content of the test is essential with information every American citizen should know.

“Every person in America should know (these) very basic (things) from what our rights are in the Bill of Rights to who wrote The Constitution, what things are protected, what system of government we have, who is the president of the United States all very basic.” said Wooton.

Cedric Noreen, sophomore, said there was necessary content to know, but also a fair share of unnecessary questions.

“I feel like some of it should be known like you should know which country’s above America and which one’s below.” said Noreen “I think (you didn’t need to know) the stuff about our governor and all the different people that you needed to know. We’re not allowed to vote yet nor are we allowed to participate in any sort of campaign to vote yet so why should it be necessary?”

The Civics Test did not appear to be a challenge with a majority of students passing much to the pleasure of Wooton.

“The vast majority of students who took the test passed, you only had to have a 60 percent, which to me is pretty low,” said Wooton.

“I didn’t think I was going to get an 81 percent, I thought I would be a few percentiles above 60 so I was prepared for it but I didn’t feel prepared for it,”

In the end whether part of the civics test is unnecessary or not, students are passing.

“Most students did very well, and the ones that didn’t (were) within a few points usually,” said Wooton