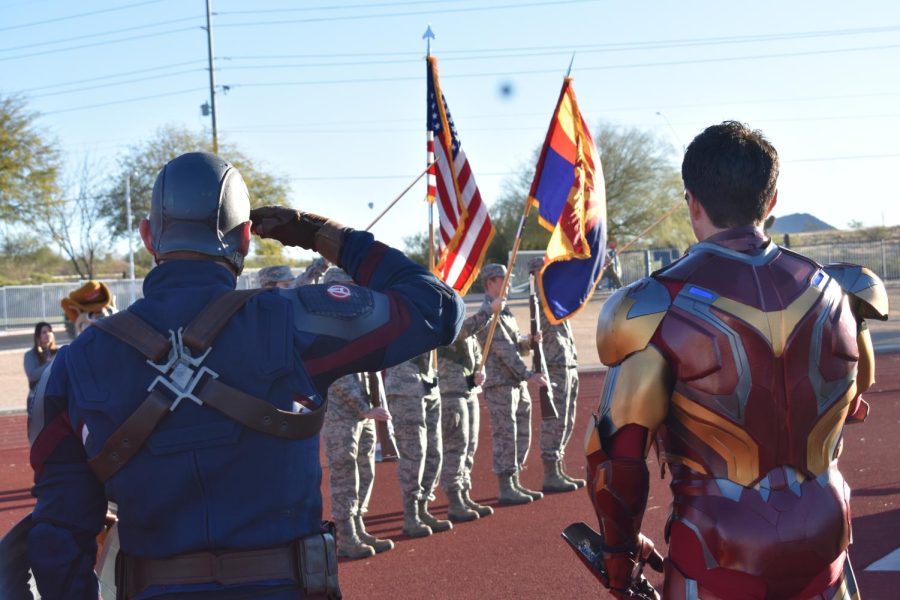 Captain America and Ironman stand for the national anthem before the 10K rcae begins.

For years, the OHS community has come together at the end of February to raise awareness for mental health and suicide prevention. Last year’s event was canceled due to COVID-19, but Ryan’s Rally for Mental Health Superheros returned this year with several activities that brought much needed attention to the cause.

Ryan’s Rally was held at OHS to bring the community and the people who knew him together and to remove the stigma around talking about one’s mental health challenges. With the stress and anxiety that school can bring, mental health is important to talk about at the high school level. Suicide and mental health can be hard topics to talk about, and the goal of Ryan’s Rally is to make it easier.

“Several years ago my brother, Ryan, died by suicide,” Christin Pike, CEO of Mental Health Superheros and alumini of OHS. “One of the things that happened after my brother died was that many of his friends and students would go up to my parents and say ‘I was worried about him; I didn’t know what to do’ and that was really hard for my parents to hear.”

A suicide in the community can have an immense impact, not only on the person’s family but everyone they knew as well.

Knowing that the community was deeply affected, Ryan’s family decided to start an event to raise awareness for mental health.

“Our family felt very strongly that from the tragedy of Ryan passing, we wanted to give back to the community and we wanted to have an event where we could bring people together and strengthen each other,” Pike said.

Mental health is a huge issue amongst adolescents; Ryan’s Rally is one way that members of the community are trying to make resources more readily available.

“I know from personal experience that our youth are holding responsibility for themselves and for their friends’ mental health challenges without getting additional support that is available,” Pike said. “There are a variety of things that you can do to protect your mental health that aren’t just [going] to a therapist or [talking] to [an] adult. I know our youth are trying to handle it on their own and aren’t aware of the resources that are available to them.”

As mental health can be a challenge for people of all ages, the event is a safe space to talk about those challenges with people who are willing to lend an ear.

“I think mental health goes across all ages; there are kids with mental health issues, to adults and everything in between,” said Dana Edwards, Ryan’s father. “Having a good time with family or with a group of friends makes it a little more comfortable to talk about. We want to make it a safe environment where people feel comfortable, and they’ll be able to talk to one another.”

Ryan’s Rally included running races and a variety of other activities that get your body moving.

“For my parents in particular, physical effort—like running, bike riding, those kinds of things—was an important piece of the puzzle because we believe that when you move your body, you move your mind,” Pike said. “Having the physical health aspect, certainly ties in to the mental health aspect.”

This year, the event was held on Feb. 19, with physical activities throughout the morning, from yoga to a lollipop race for kids, the event had something for everyone.

“There is something for everybody,” Pike said. “There is a one-mile fun run, so if you’re not a runner and not interested in doing [the 5k] we have the one-mile. We also have other events including yoga, with a mindfulness [aspect] so we can talk about mental health as we move our bodies.”

With three different races occurring simultaneously and the races being separated by gender, there were a total of 18 first, second, and third place finishers. The winner of this year’s 5k race was Tyler Bedgood, a 6th grader at Stetson Hills School.

“I was excited, but I was tired [after the race],” Bedgood said.

Not only did the event receive support from people in the community, but also people from far distances, coming to support each other. Rich Hadley, of Florence, Colorado, traveled for the weekend specifically for Ryan’s Rally.

“We had [the race] on our minds when we came down,” Hadley said.

As a coach, Hadley understands the importance of mental health as it can impact many people in everyone’s community.

Hadley, at 65 years old, was content with finishing the 10k race in about 48 minutes.

“It was five loops, which is four loops too long for me, but it was good,” Hadley said. “[The race] was nice, it’s got some pretty good hills in it.”

Due to the scale of the event, many volunteers were required to help set up, traffic control, and work water stations.

“It’s been really fun,” said Mackenzie Tanner, senior. “I really wanted to do it to show that I can support people and help people out when they need it.”

Even volunteers were able to come out of the event knowing its importance.

“I have family members that suffer from depression [and] anxiety, so I know what it’s like,” Tanner said. “I always try and help out wherever I can. It’s really important to my family; that’s why I thought it was a great event to [volunteer at].”

The proceeds of the rally benefit a host of different organizations.

“The benefits from [the event] go to the Andy Hull’s Sunshine Foundation, which is another organization that is specifically talking about suicide prevention in Arizona,” Pike said. “We also benefit the Sandra Day O’Connor marching band—that’s a big part of our family tradition, we really like giving back to the school. We’re hoping, if we get a lot of participation this year, [to] fund some mental health first aid trainings.”

Last year’s event was unable to take place due to COVID-19. This year, students from a variety of clubs came to volunteer and attend the event.

“I have to admit I was very concerned; about a week ago we only had 50 people signed up,” Edwards said. “We had at the end about 135 people total, which is great. It’s a little bit down from the year before, but I think we more than made up [for it] with participation from volunteers from the school. ROTC, the band, [and] different clubs came so we’re really pleased.”

Ryan’s Rally takes place at the end of February annually as a way to remember him and to celebrate his life.

“For [my family], it was very much a ‘we want to remember him at this time.’ My brother’s birthday is February 24th, so we do it in that last week of February, around his birthday, as a time to remember him, but also bring the community together and turn our tragedy into something that is a positive experience,” Pike said.

Meaningful conversations are in abundance at Ryan’s Rally as people support each other.

“It seems like every year we have conversations with people. The first year we did it at O’Connor, there was a woman who came and signed up and was running in memory of her son who had past away, not from suicide, he had just passed away,” Edwards said. “She was dealing with some grief and [the event] was such a great opportunity for us to support her.”

From support to physical activity, Ryan’s Rally is a community event that benefits everyone.