Approaching the expiration date of the planet 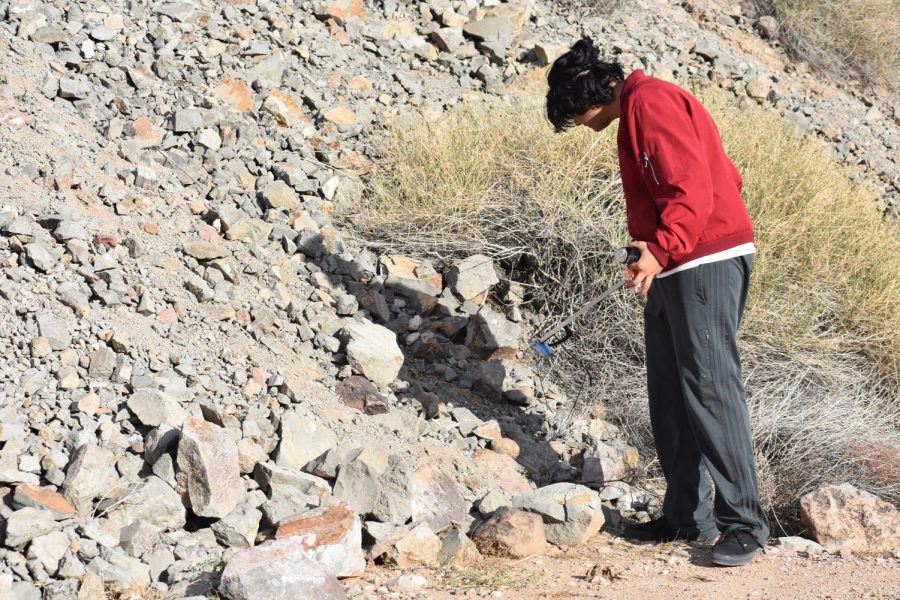 Ashish Kaushik, junior, picks up trash to clean up the environment around OHS's campus.

Climate change has been an issue that generations of humankind have witnessed, yet many have, and continue to ignore it. Now, the younger generation has been given the daunting task of stopping what some people call, the expiration date of the planet.

Luckily, some students at OHS have been working to do their own part to fight climate change and protect the environment. From starting clubs to working with their families to stop climate change, here is how students are doing their part.

“I was interested in algae technology… It helps medicine and helps the environment,” said Michaela Pajuyo, senior.

Pajuyo started a club at OHS called Go Green, in order to spread her interest in environmental sciences to others.

“Well I started the club [Go Green] because I was interested in environmental science for college so I would research things like bioengineering so I wanted to make a club around it,” Pajuyo said. “Right now I’m trying to make it more STEM like so they [the club members] actually have to engineer things for it.”

The club focuses on how each member can work to clean the environment, spread information about environmental issues, and combat climate change.

“Currently, we’re working on how to make sustainable clothing for everyone and we’ve also been thinking about working out how to make our own paper,” said Hana Peco, junior.

While sustainability is something that is important and necessary to stop damaging our environment, it can be quite expensive for most people. Electric cars, solar panels, and even eco-friendly bedding, are put at higher prices compared to the common, yet eco-damaging products, causing most people to continue their consumption of non-sustainable products.

“I feel like we’re doing better with wind and solar power and we’re trying to have electric cars now but the problem with sustainability is that it can be expensive so people have a hard time switching over to that,” Pajuyo said.

Buying sustainable products might be difficult for some but developing sustainable habits could be easier and even helpful. Researching those simple ways to practice sustainability and consciously incorporating them into your daily routine can help reduce the amount of waste produced from your household.

“Mainly stop using as much plastic as they [students] do, because that’s a main factor,” Peco said.

One student and her family have incorporated multiple habits into their routine that have helped them stay conscious about their impact on the environment. They have done research on how being wasteful  can directly cause harmful effects.

“Wasting food and water, a lot of it goes to trash and gets stuck in the soil and that releases fumes and then it decomposes and releases fossil fuels which isn’t good,” said Anisha Tanikella, junior. “We try really hard to conserve water; instead of using the dishwasher we hand-dry the dishes.”

The topic of fixing the climate has been hanging over politicians as well, making it one of the main subjects that has been debated for years now. Voters, scientists, and climate activists have continuously pushed government leaders to take stricter action.

“I had been to one or two anti-climate change protests which was talking to our senators about pursuing more aggressive policies against climate change in our upper government,” said Ashish Kaushik, junior. “We have to make change anyways so we just have to accelerate it.”

Scientists have repeatedly warned government leaders about the seriousness of the climate crisis with the presentation of concrete evidence, but nevertheless the topic became a disputed one amongst global leaders. Consistent arguments about what course of action to take, and if governments should take any action at all, has only further stopped any real effective work from being done.

“Science says that we don’t have that much time to fix the planet so that’s what worried me,” Peco said.

“We have way more information now. Back then they were explaining how global warming would affect the world and how record heights [of heat] would be achieved and now that we are seeing that, we can safely assume that the scientists know what they are talking about,” Kaushik said.

The majority of people in the U.S. know that places like California and Arizona are getting hotter and hotter every year, but instead of taking action to stop this drastic increase in temperature, many have merely accepted that heat and droughts will continue to happen regularly.

“In Arizona, we can see climate change majorly affecting us with [the heat] reaching record heights every year; it’s to the point where it’s very obvious that the signs are there, we’re just choosing to ignore them,” Kaushik said. “California has been through multiple droughts and it is a direct result of global warming.”

Staying neutral and silent on what is happening to our planet and not doing a single thing to keep it from being slowly destroyed, could potentially damage Earth in an irreversible manner.

“At the rate that we’re going, the Earth could become inhospitable in the future… there’s more evidence for that than there has ever been,” Tanikella said.

While statistics and patterns showing hotter temperatures have been demonstrated through a multitude of studies, not seeing direct effects in their own personal life makes people question and deny how drastic the effects of climate change are on the common person. But no matter how much people ignore the issue, the entire globe will be affected.

“The pollution is getting pretty bad which is going to make it more difficult to breathe for people who already have some difficulty breathing,” Peco said. “Same thing with sight because the pollution makes everything dusty and you won’t be able to see.”

Many members of Generation Z have taken it upon themselves to be the change and solution against the climate crisis. More morale for the environmentalist cause has spread amongst teenagers that some are even willing to pay slightly more for sustainable alternatives of everyday necessities.

“We’re dumped with it and it just got progressively worse so if we don’t put a stop to it no one will because no one’s going to care enough,” Peco said.

But Generation Z will not be able to fix the climate alone. Collecting evidence and presenting evidence to lawmakers may not be possible for everyone but adapting sustainable habits is.

“We’re not really going to get anywhere if people don’t try,” Pajuyo said.

Research has also proven that properly educating kids on the climate crisis can help decrease emissions and also improve climate literacy extensively amongst the upcoming generations. But until better climate education is instilled into curriculums, people should start taking it upon themselves to learn and spread information about global warming and climate change.

“Educate yourselves…There’s tons of information out there and tons of ways that you can help so do a quick google search,” Kaushik said. “The articles are everywhere.”