Cheer and pom get peppy with success 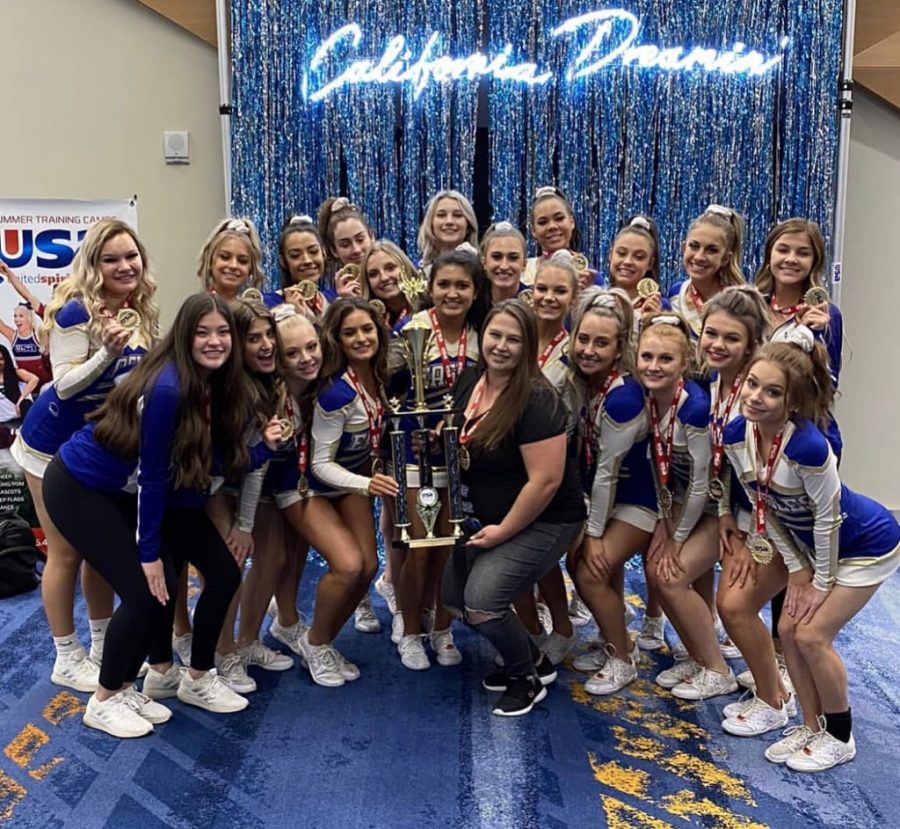 The cheer and pom teams of OHS are always a source of high school spirit. From exciting routines filled with difficult moves to shouting at the top of their lungs, they never fail to bring much needed energy into students’ stressful school lives. They are even able to bring that pep into their own competitions, and as another year goes by, the cheer and pom teams gain more success for their school and themselves.

Their nationals took place in Anaheim, CA, where both teams competed in their own divisions to win the gold. From Feb 14, 15 and 16, cheer and pom went through ups and downs, with cheer winning second place and pom being unable to reach the finals. Regardless of the results, the teams feel like winners in their own special way, overcoming the difficulties that come with competition.

“Going into it, we had a lot of changes…We were really shocked that we made it to day two, and let alone, got second place,” said Madysen Halawith, junior.

In the cheer portion of nationals, the OHS team earned the highest raw score, before deductions, out of all three teams that made it to day two, but some mistakes landed them into second place. Still, cheer saw this as something to reflect on for the future.

“I think that if everyone commits from the start, and we all work together, I feel, as a team, when we’re bonding, I feel that really does affect how we perform at the end of the day,” Halawith said.

While cheer did not win first place overall as they lost by .35 of a point, they did see much improvement compared to the year before, and that itself, can be considered its own reward when it comes to competing.

“Last year, we went from last place to this year, getting second place, so I was just really proud of the way the team worked together,” said Riley Reisinger, senior.

This achievement brought confidence to the team, finally convincing the girls that their own abilities can compete with the best of the best.

“I think that we didn’t really realize how good we actually were, since we weren’t the best last year, so I think that this is going to push the girls for next year to push for first, because we didn’t realize really that [second place] was even in the question, [or] that that was possible,” Reisinger said.

With a little more pep in their step, cheer looks to a bright future as they hope to better their competitive attitudes and aim for their goals.

“Next year, it would be nice to win nationals because we got second this year, so I definitely think we’re capable, and it’d be cool to win my senior year,” Halawith said.

Pom, on the other hand, despite their disappointing results in their division, looks at nationals in a more positive light. The girls can still find pride in themselves, which highlights their growth as a connected team.

“I think that we did really good this year. We’ve had a lot of different obstacles that we’ve had to face, so I think, as a team, we really pulled together,” said Aubrey Jackson, junior.

Room for improvement is a never ending goal for competitive teams, and pom is no exception. With another year of experience under their belts, the girls plan to develop their team with as much support as possible, especially for the juniors, like Jackson, who want to be a great influence for the team once they become seniors.

“So my goal, as a senior, is to really lift up the other girls, especially the underclassmen and the people brand new on the team, and just make them feel welcome and loved and help them achieve what they’re striving for, and to me, personally, to improve on my skills,” Jackson said.

Cheer and pom made memories to remember for a long time at nationals, and this is only the beginning as new generations walk into OHS, wishing for a spot of their own on the teams. For the girls who desire to continue on or are graduating this year, they don’t hesitate to leave some important advice that is essential for all teams.

“I just hope that, as the years go on, the team gets closer, and that everybody is able to keep improving and realize what we’re actually capable of,” Reisinger said.