Ceramics teacher sculpts the legacy of a fallen hero 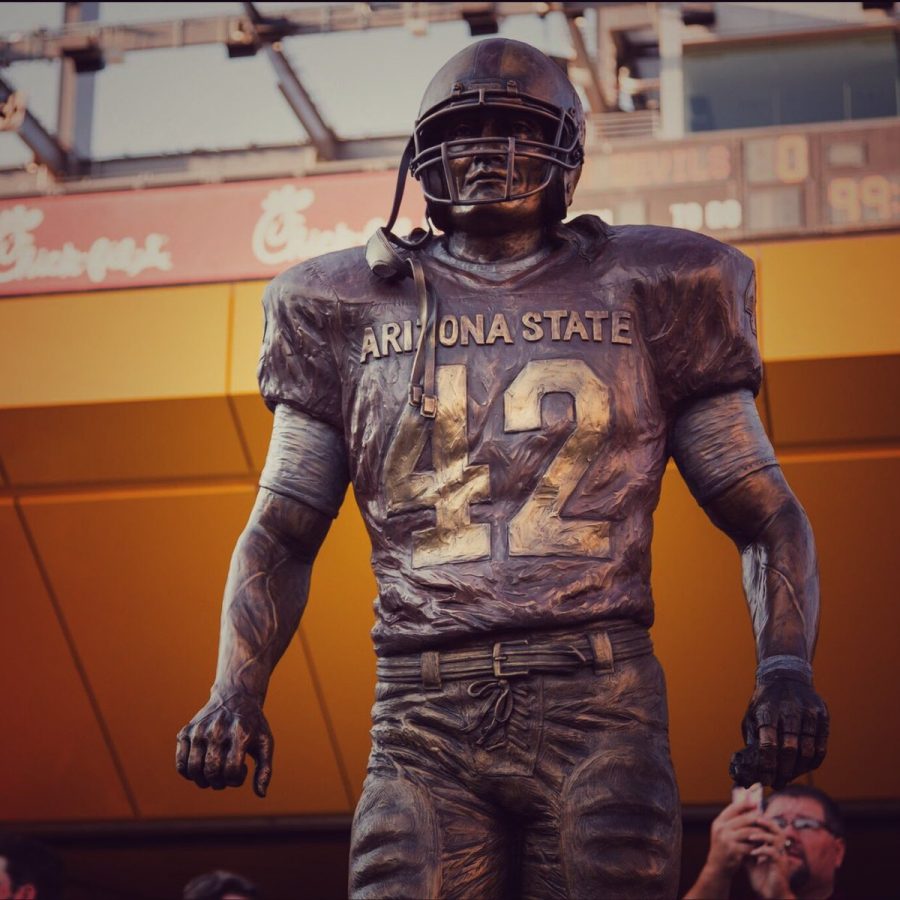 Artists across campus strive to tell stories through their work, and leave an impact on a subject that will make it remembered for as long as possible. This year, it just so happens that one OHS artist’s work will be seen by thousands, watch over ASU Sun Devils and leave the legacy of an athletic hero for generations to come.

ASU’s Sun Devil stadium has received a new addition to tower over its football team, that taking the form of a statue of Pat Tillman sculpted by OHS’ own ceramics teacher Jeff Davenport.

Pat Tillman played as linebacker for the Sun Devils where he carried the team to an undefeated season as well as a spot in the Rose Bowl. He was then drafted to the Arizona Cardinals where he played safety and started ten of 16 games his rookie year. Eight months after the September 11th attacks, he turned down a contract to enlist in the U.S army.

Tillman and his brother Kevin took part in the initial invasion of Iraq, and he was then redeployed to Afghanistan, where at the time he was reportedly killed from an ambush. However after his burial, the Department of Defense and Congress launched investigations, declaring his death the result of friendly fire.

Davenport said she received this opportunity from a previous client she had sculpted for and was thrilled to take it.

“I have a client, and I had done a sculpture for his family, the Zebulon Pearce Memorial in Mesa Arizona,” Davenport said. “I did that project and it’s now in the city of Mesa and so my client was asked by ASU if he would have an artist create a Pat Tillman sculpture and he came to ask me if I’d be willing to do it and it was a phenomenal project to work on so I said absolutely.”

Davenport started with a 16 inch maquette which took about two months to make, which was then enlarged to a 1.1 life-size sculpture. Davenport says she wanted this sculpture to be particularly important due to the subject matter.

“I wanted this to be a really special sculpture, I wanted to do my very best, not that I don’t do my very best on all of them, but each time you do a new piece you learn from it and so I was hoping that this project would be a phenomenal project, I wanted it to be better than anything I had ever done,” Davenport said.

The long process of crafting this sculpture has provided Davenport herself with new insights about who Tillman was, and what he represented as a person, and student.

The public response and appeal of this new statue has spread across social media, where articles about it have received likes stretching into the thousands. Davenport says she was amazed to find out how much this spread and even made her name bigger.

“I think my students were like ‘Mrs. Davenport you have 9,000 likes, you’re famous’,” Davenport said. “I thought wow that’s pretty amazing, and I have people contacting me that want to purchase the small maquette so it has kind of put my name out there, it’s just been a great project.”

Davenport simply hopes with this sculpture that the legacy of Tillman will live on and future generations will remember his story and what he lived and died for.

“I hope that having the sculpture there will be a reminder about him, even students today if you ask them who Pat Tillman is they don’t know,” Davenport said. “Even if people don’t know who  he is or they forget, there’s that little plaque on the front that’s kind of a reminder of who he is and what he stood for.”