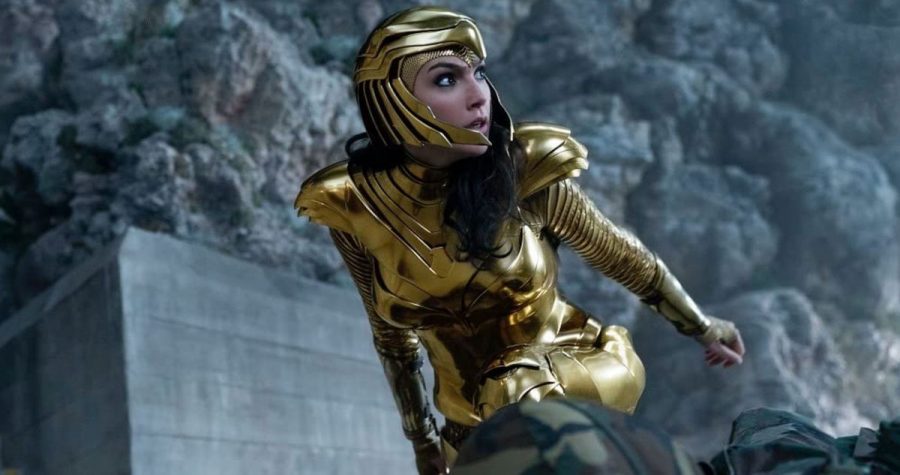 Another year, means another terrible movie by DC Entertainment and Warner Brothers. “Wonder Woman 1984”, directed by Patty Jenkins, launched on Christmas day both in theaters and on the HBO Max streaming service for subscribers. Not to many’s surprise, DC has once again failed with another installment in their “connected universe”.

The movie follows Wonder Woman, played by Gal Gadot, as she and her back-from-the-dead boyfriend, Steve Trevor, played by Chris Pine, attempt to stop oil barren, turned god-like entity Max Lord, played by Pedro Pascal, as he attempts to overtake the world and cause nuclear warfare. That’s the plot in its purest form but it gets much, much worse. The plot is so messy and nonsensical with so many mechanics that are nonfunctional, while the main protagonist is the equivalent of a plank of wood and is very easily overshadowed by the acting prowess of the antagonist.

The first 10 minutes of the movie open with a young Diana Prince, Wonder Woman, on her home island Themyscira, participating in a form of Olympics. Right off the bat, this entire flashback contradicts the first act of the previous Wonder Woman film. In Wonder Woman (2017), the film makes it clear that Diana hasn’t started training as a warrior until she’s a teenager. The film portrays her as a weak and incompetent child, but WW84 portrays her as this highly skilled and resourceful child.

There’s also the major contradiction of her mother, Hippolyta, who didn’t want Diana training at all in the first movie and didn’t approve of her practicing until she was a teenager. Now she’s suddenly able to participate in this tournament at the age of 10 and her mother approves of it? The writers didn’t think to keep in line with continuity despite this being a direct sequel, which will become more apparent as the plot goes on.

The biggest problem is that it’s purely used to set up the main theme of the film: “No true hero is born from lies”, which is a fundamentally broken concept. During the competition, Diana takes a shortcut and is disqualified for doing that. She’s frustrated because she thinks she rightfully won, but her mother explains that what she did was wrong. Once again, the first film contradicts the message being boasted by WW84.

In the first film, Diana’s purpose in life was completely hidden from her by her mother. She thought Zeus birthed her out of love but in actuality, she was created to kill Zeus, which she learns in the final act of the film. The idea that a hero can’t be born out of a lie is entirely naive and a disservice to so many other heroes. Iron Man’s origin was founded on the idea that Tony Stark believed the military-grade weapons he was manufacturing and selling were saving lives, but he learns that they’re only being used to kill and enslave foreign countries. He becomes Iron Man because of a lie. Once again, this sentiment is so juvenile and ignorant that it’s shocking anybody would actually agree with it.

In terms of plot, these first 10 minutes mean absolutely nothing and only create damage to the overall continuity.

As a side note, the laws of physics do not apply to Wonder Woman whatsoever. Throughout the movie, Diana uses her lasso of truth to traverse the environment. The lasso is simply that: a rope. However, because the movie wants to put Wonder Woman on this pedestal, the writers throw any sort of logic out the window when it comes to the way she swings and moves around on the lasso. Spider-Man media accomplishes this much better. Spider-Man writers typically justify Peter Parker swinging by applying legitimate physics to his transportation. Spider-Man swinging is like a pendulum, where he has to calculate where to shoot if he wants to keep his arm. The film also manages to get more nonsensical by having Wonder Woman swing on lighting for a solid three seconds when lighting only lasts for a millisecond, meaning Wonder Woman would have to be moving close to the speed of light, which she clearly doesn’t.

At the second act low point, Wonder Woman learns to fly, which completely and utterly destroys what we knew about her character in her first film appearance, “Batman v Superman: Dawn of Justice”, which takes place in the present day, makes WW84 a prequel. Diana never flies in BvS. The movie established that Wonder Woman can only perform large leaps. Not to mention that in Batman vs Superman: Dawn of Justice, Diana tells Batman that she walked away from mankind 100 years ago, which WW84 very clearly contradicts, because she’s still operating in 1984. The movie is layered with so many illogical, plot-breaking inconsistencies.

The worst part about the film is the return of Chris Pine’s character, Steve Trevor. Steve was a World War British intelligence agent who sacrificed his life for freedom in the first film. He was also the one to introduce Diana to man’s world and they slowly fell in love but couldn’t capitalize on it because of Steve’s death, so Diana has been living alone for 60 years.

The driving element of the plot is a magic stone that grants you one wish. Diana wishes for Steve back, obviously not knowing the consequences of using the stone and Steve comes back, but in another man’s body. Only Diana can see his face while everyone else sees the body he’s inhabiting. The moral implications of this plot point are absurd. Steve has just stolen another man’s life, one who had a nice apartment and a stable job. Diana and Steve do not acknowledge this whatsoever and only play it off as a joke. The “hero” of the story does not care that somebody’s life is stolen; she only cares about her dead boyfriend being back.

It’s Steve that convinces her to let go of him and “renounce her wish”, taking back her wish and permanently getting rid of Steve. He doesn’t even convince her for the right reasons. His justification for Diana letting go of him is so that she can get her powers back, which she lost as a consequence of her wishing for Steve back. He doesn’t bring up that they’ve been putting this man’s body in danger without his consent and have been flat out stealing his life, not giving it a single thought. This only damages Diana’s character further.

Wonder Woman, herself, has no dimension. Her only desire is Steve. We, the audience, don’t know her perspective on anything. Why is she the way she is? Why does she hold certain beliefs? Why does she save people? Why does she stay out of the public eye? Why doesn’t she make new friends? What is stopping her from moving on from Steve? Why doesn’t she return to her home? What is her character? It’s extremely difficult for the audience to empathize with her and can’t understand her goals and motives because she has none. She is a non-character, but thankfully there is one saving grace.

The only redeeming factor of the film is Max Lord, the “villain”. Max is a simple man trying to make his way up the chain and provide a great and rich life for his son. The scenes he shares with his son are tear-jerking because we understand what he wants and why. Max was poor and abused as a child and could simply follow that same path, but instead he wants to make a man of himself and provide for his kid. He’s only the villain because he’s consumed by the power of the wishing stone, which drives him insane. Max’s character is informed in two scenes while Wonder Woman has had three movies and we still don’t understand who she is and what she wants.

“Wonder Woman 1984” directed by Patty Jenkins is a travesty of a film. Wonder Woman is a one dimensional, brick wall of a character, that the film tries to portray as altruistic but only tells us she’s a careless, shallow, and borderline-evil demi-god. The plot is non-functioning with so many half-baked ideas, dozens of plot holes and contrivances that damage viewer investment. Warner Bros have already greenlit a third entry in the Wonder Woman franchise, and if this film is any indication of how much effort will be put into the third installment, Wonder Woman on-screen is doomed.